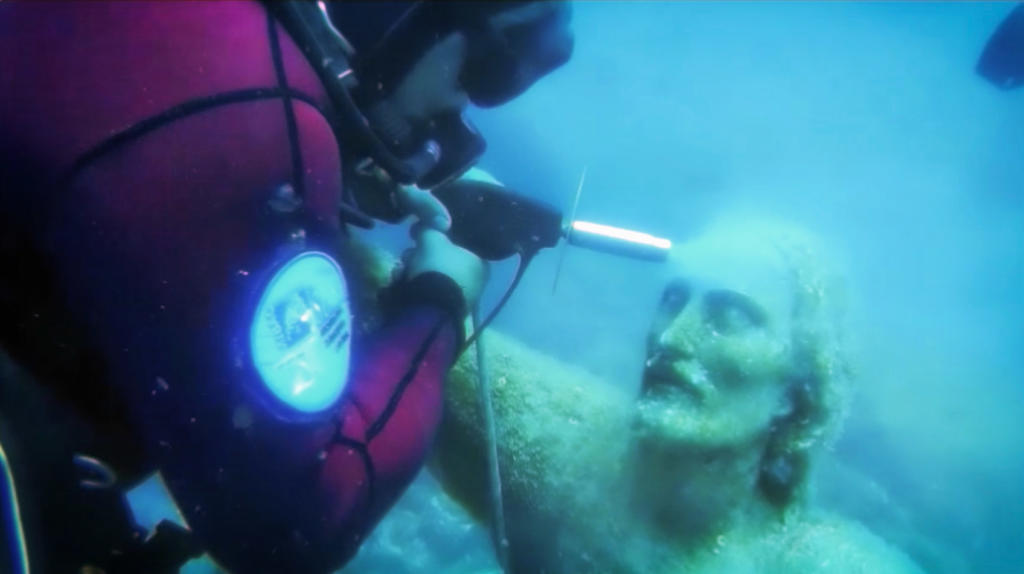 We are talking about a topic that has always been close to my heart, Underwater Archeology and its Superintendency technicians. Underwater archeology is a branch of archeology. Because of its specificities, it requires particular investigation techniques, and depending on the field of historical and artistic interest: internal waters, wrecks of ancient submerged ships seabed … Magical rediscovered in the deep and enveloping silence of our sea a unique heritage to be enhanced. We have several sites in Italy of interest, study, research …
In 1997, the first Underwater Archeology Unit was born, Superintendence for Archaeological Heritage of Liguria, now Superintendence for Archeology, Fine Arts and Landscape for the metropolitan city of Genoa and the provinces of Imperia, La Spezia and Savona, it has equipped itself with an additional tool for the research activity and a staff that actively works for the enhancement of the Italian underwater archaeological heritage and more specifically of the Ligurian territory.
The archaeologists and underwater technicians of the Superintendence carry out dives, mainly of an archaeological nature, make visual reconnaissance and inspection inspections, measurements and surveys, recovery of finds, excavations, take video-photographic documentation, make withdrawals and samples, pose signs , and also create operations for underwater archaeological work control, monitoring and / or verification of underwater archaeological sites.

STAS in Liguria is a group that carries out institutional activities for the protection, research and enhancement of the underwater archaeological heritage. It takes care of the necessary checks to protect the environment and the territory in the case of maritime works in the port area such as polluted water, obstructive objects, maritime traffic, very low visibility, and carries out research and enhancement activities on known sites which are then opened guided tourist dives. The University of Genoa also trains archeology students by holding underwater archeology excavation methodology workshops
There are two two Roman ships in the province of Imperia, two Roman ships in the province of Savona and a site that includes two Roman drums in Lerici in the province of La Spezia, all tourist-usable sites.The deepest and most valuable archaeological excavation ever carried out in Italy and perhaps in the world: a Napoleonic lifeboat at a depth of -65 meters, created thanks to the collaboration of divers of the Navy adequately trained to operate excavations with archaeological methods. 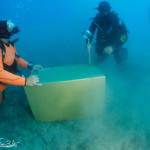 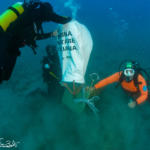 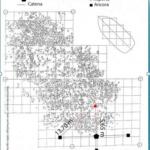 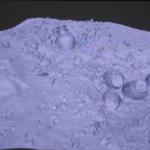 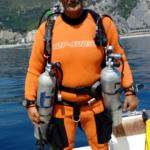 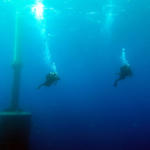 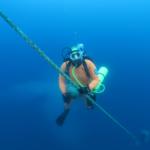 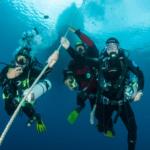 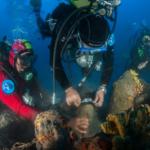 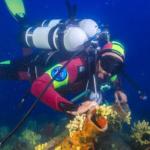 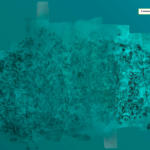 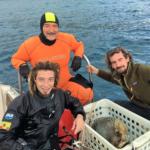 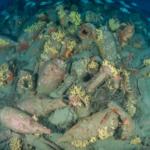 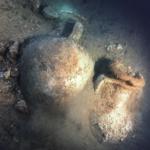 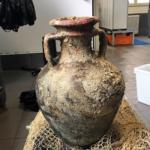 1) How was the passion of underwater archaeologist born? How did you get started?
Trigona
I think underwater archeology should not be considered a pure passion, but born from the combination of two strong distinct passions: diving and the sea on one side, history and archeology on the other. The underwater archaeologist was born from the fusion of the two skills. As far as I’m concerned, I started freediving and spearfishing as a child, then in high school I developed the technique of scuba diving, following the various stages of sport diving; always in high school I started to get passionate about history and literature and this led me to the faculty of Letters with archaeological address of the Sapienza of Rome. Then, during the School of Specialization in Archeology, I realized that my two main passions could also become a job for my future: I enrolled in the 51st Course for divers of the famous Marco Polo School in Rome and I became a Technical Operator Professional diver. At that point it is only a matter of work, stubbornness and luck, first 10 years as a freelance archaeologist around Italy, then archaeologist officer in the Superintendency.

Danielli
In my case we cannot speak of passion for underwater archeology but of passion for any underwater activity. In reality, the aquatic environment has always characterized my life, starting from the birth in Genoa, a seaside town, then as a water polo competitor. During the years in the Folgore Paratrooper Brigade I have experienced the military tactical aspects of swimming and diving. Working as a diver in local service (commercial diver) in the port of Genoa I tried the construction work and underwater carpentry. In the activity of trainer for water rescue for the Genoa National Rescue Society (lifeguards training – rescue swimmer-) and the Italian Red Cross allowed me to specialize in rescue and aquatic and underwater safety. Finally I landed in the Superintendency and every day I experience the archaeological aspects of diving, especially the privilege of being able to access past worlds and try to reconstruct their events, I could say that it is a mature love.

3) Do you give courses to the University of Genoa to archeology students?
Danielli
For some years we have been collaborating with the faculty of archeology of Genoa in their laboratories of ‘underwater archaeological excavation methodology’. Subsequently, students can try to dive and obtain the first certifications. Those who obtain the necessary qualifications are involved in our activities as observers due to the fact that for now it is not possible in Italy to employ personnel without professional diving qualifications.

4) Tell us about your work, in particular? How is your working day divided?
Danielli
There are no identical days, it depends on the type of intervention to be carried out. In principle, given a scientific objective decided by dr. Trigona plans the intervention. The dives are planned on the basis of the depth and bottom time that the job needs. Once the dive profiles and the equipment necessary to carry out the intervention have been determined, the logistics are planned: how to get there, with which boat, with which devices for the emergency, which bodies to contact: coast guard, hyperbaric center nearby . The equipment is checked and the underwater emergency check lists are repeated. The intervention is implemented and subsequently in the debrefing the point is made on the errors and the phases to be improved.

5) Are we talking about the open excavations you are working on now?
Trigona
It would be a bit long to talk about all the ongoing activities of the STAS, as each project is intertwined with the others, carried out in parallel according to the weather, funding and priorities. In particular, the hot fronts on which we are working and planning new activities are the wrecks of Imperia and the planning of the final phase of the New Naval Museum; the excavation on the Roman ship of Albenga and the new layout of the Roman Naval Museum of Albenga; the wrecks of the Portofino Promontory Area which we hope to be able to shortly.

6) How does an underwater archaeologist train?
Danielli
Maintaining physical fitness is a personal responsibility and each one provides autonomously to train as he sees fit. Every year there is a very thorough health check that enables the activity. In general, training takes place by working on average 50/60 annual dives per operator

7) How long do you spend on reconnaissance and research?
Danielli
Usually we intervene on the reporting of sports divers and verify what it is or in the context of structured research programs on known sites. The weather is therefore widely variable also depending on the weather conditions

8) How many dives before I can retrieve a find? How does it work underwater and with what attention?
Danielli
Also in this case it depends on the visibility, the context, the weather conditions, in any case the voluminous finds such as the amphorae are harnessed with special aids which, by means of a lifting flask, allow the safe picking.

9) The most interesting discovery in recent years?
Trigona
In recent years there have been numerous new wrecks discovered in the Ligurian Sea and we now have a detailed map which makes the archaeological interest of our sea evident; discoveries are many then, but the ones that interest me most at the moment are the rediscoveries. We are digging the Roman ship of Albenga, a wreck that has made the history of international underwater archeology, and still today on this site we find finds that allow us to rewrite the history of this ship and more generally of Roman trade. At Capo Noli we found a French armed spear that sank during the battle of the same name in 1795 and inside it the entire on-board service and navigational instruments of the commander. In Portofino 3 new wrecks, the first Renaissance, the second with a particular and rare type of Gallic amphorae not documented even in the French wrecks, the third is still a surprise.

10) What is photographic documentation for?
Trigona
Underwater, especially on the seabed where we always operate below -40 m, there is no time to carry out archaeological surveys in the traditional way and the photographic documentation with the necessary precautions and new technology allows very accurate surveys. In addition, museum enhancement, teaching and dissemination are essentially based on photos and videos.

11) Is a final exhibition created? Where can you discover the discoveries that come out of the sea?
Trigona
The excavation of Capo Noli was concluded with a thematic exhibition held last year in Finale Ligure (SV), while the new Museums of Imperia and Albenga will welcome a large part of our discoveries, the report of the discoveries and our activities.

12) Future discoveries? Clues and curiosities?
Trigona
The new discoveries will be in the Portofino area, rich in wrecks of which we still know too little; we hope to be able to develop a new museum project in Santa Margherita that can collect the finds from the wrecks in the area; opening new shipwrecks to the sea for visits must necessarily also include museum and research spaces on land that can provide support for visits and allow everyone knowledge and use of archeology and the underwater world.