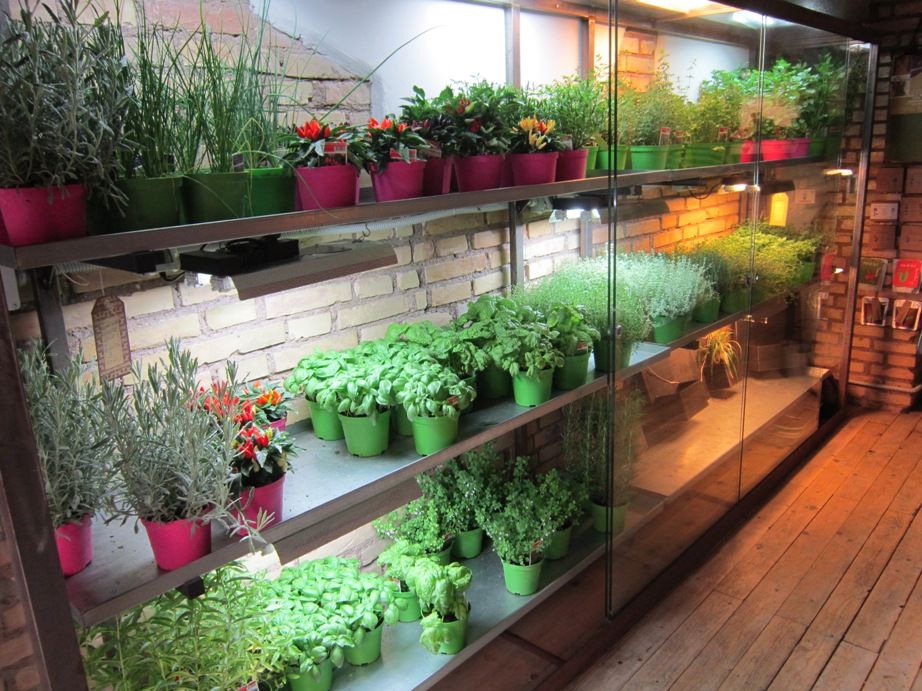 Along via Urbana, an amazingly quiet and delightful street in Rione Monti (city center), we can step into an equally surprising bistro, ready to welcome the passers-by with simple and natural food, mostly vegetarian, centered on the use of aromatic plants, edible flowers and sprouts, all united by a common feature, somewhat rare in these days: freshness. 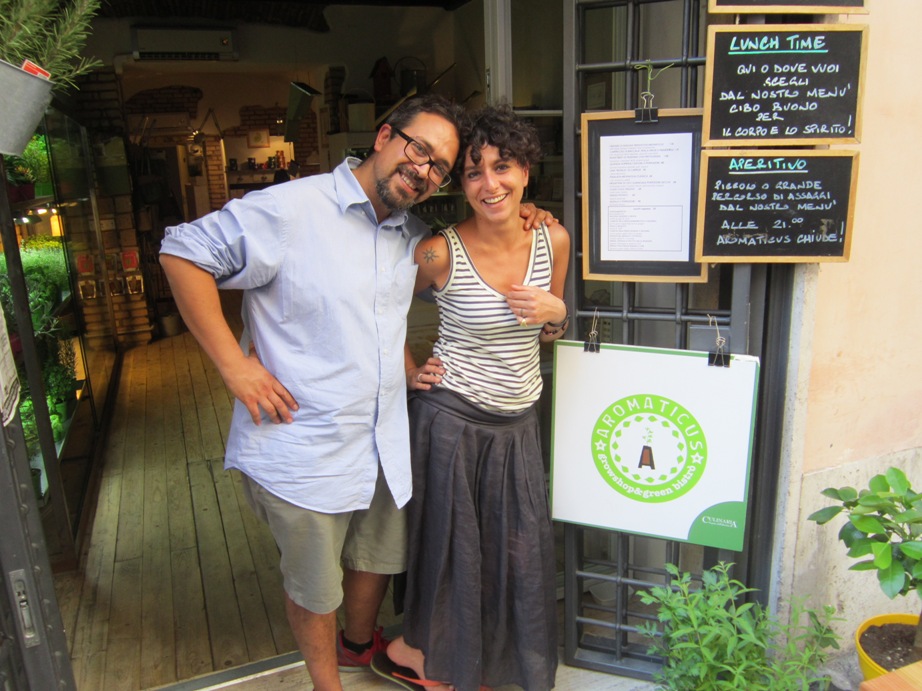 It’s in fact  a full shelf of vivid and fragrant herbs that greets me when entering the bistro; I sit down with Luca De Marco and Francesca Lombardi and, while enjoying a vegetable juice, I ask them about the story of Aromaticus: where did the idea of this place come from?

LDM. We both come from the sector of professional catering, we met while working together in a restaurant and then we decided to embark on a journey together (professional and personal a.n.) that became longer than expected.

One evening sitting on the terrace amid herbs, it came to our mind the idea of ​​creating a bistro that would be an urban nursery, to give people the opportunity to find herbs as well as gardening tools for “urban farming”, and also a place where one could find sprouts, cress, edible flowers, algae, and all those ingredients of plant origin that is usually hard to find in Rome (and in other Italian cities). Our attempt has been to use and make available these ingredients, which in the so-called “haute cuisine” are common, and give the possibility to  housewives and men in the street to find them and enrich their dishes.

From such thought came Aromaticus, a bistro where you can eat in the middle of plants and discover special ingredients. 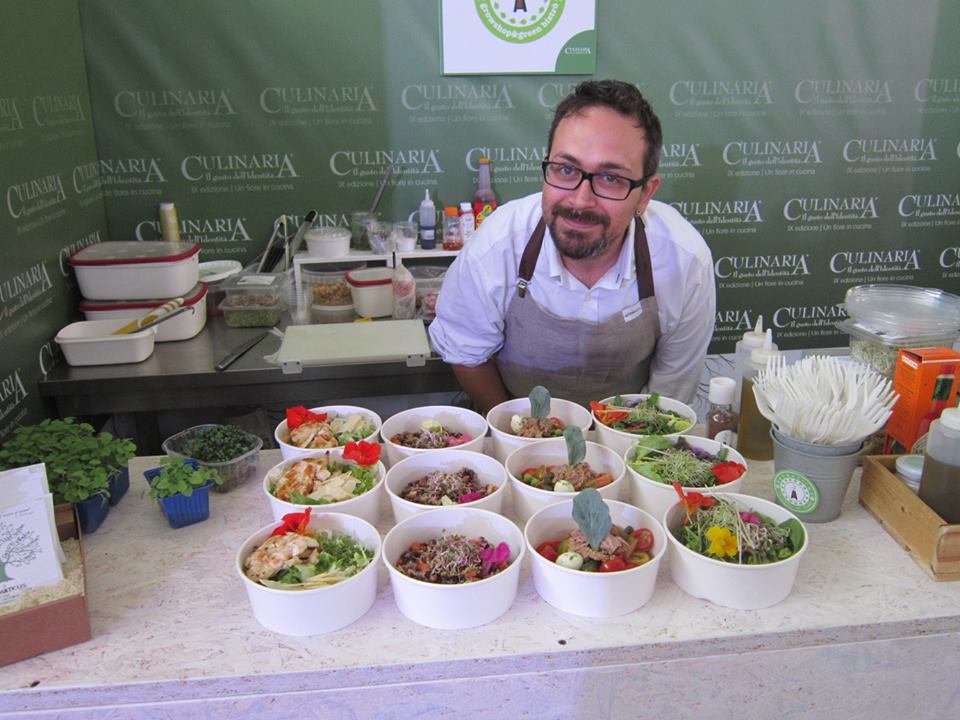 From concept to completion, what motivated you?

LDM. From my point of view, that of a chef, the fact that I had a lot of difficulty finding sprouts, cress and flowers even though I worked in a restaurant, was the spring that triggered in me the belief that it could work. Regarding Francesca, who is an aesthete, it was intuition that a place thus structured could not only interesting, but also beautiful.

FL. We set out to find a store, we wanted it in Monti, we found it in Monti, we bet on a road which at that time was only partially developed, and is now becoming a reference point for street gastronomy, for Roman gastronomy; others restaurants have opened, there now is a raw and vegan bakery, now we are here, and we hope it can grow even further in this direction that I deeply cherish: an interesting, alternative, more European cuisine compared to the average.

LDM. It ‘a very simple cuisine, with natural ingredients and natural form, one that seeks to respect the ingredients, with hardly any cooking, and the use of great basic ingredients, a great extra virgin olive oil, locally grown vegetables, and then those added values in terms of flavors and nuances that are the herbs from our own greenhouse, cress and sprouts with which we dignify ingredients … that are already noble by themselves.

We try to transform ingredients as little as possible, the study phase of the dish is more on the combination, on the approach, rather than on the transformation process.

What dishes would you suggest customers calling for the first time by Aromaticus?

FL. It depends on the client: to a vegetarian we would certainly recommend quinoa, which we serve accompanied by chickpeas hummus and leek sprouts; soups, especially in winter, are another specialty of ours, again served along with herbs and sprouts.

LDM. To an omnivore like I am, definitely our tartare fassona (11 € an..) which is a Piemontese purebred cattle meat coming from non-intensive farming, simply prepared and seasoned only with a “Itrana monovarietale” olive oil from near-by ciociaria , and whole salt.

Almost all our dishes come with a small salad as we conceive it, with a number of flavours and perfumes: herbs, roasted seeds, sprouts, flowers. This accompaniment to the dishes is just a taste of what it is then another speciality of ours, the aromatic salad (6 € a.n.), a salad rich in flavors and textures, where we provide various kinds of leafy vegetables, fresh and dried fruit, roasted seeds and most of all cress, sprouts and flowers.

What room is there for vegetarian food at Aromaticus?

LDM. Vegetarian and vegan cuisine has an important place for us, because it would be absurd if, in a place called green bistro, we were unable to offer such type of food; there is a wide scope for creating and inventing using plant ingredients, it is not necessarily to bother animals, you can create very interesting vegetarian and equally nutritious combinations, just think of quinoa, beans, lentil and alfalfa sprouts, all equally interesting from the point of view of taste. 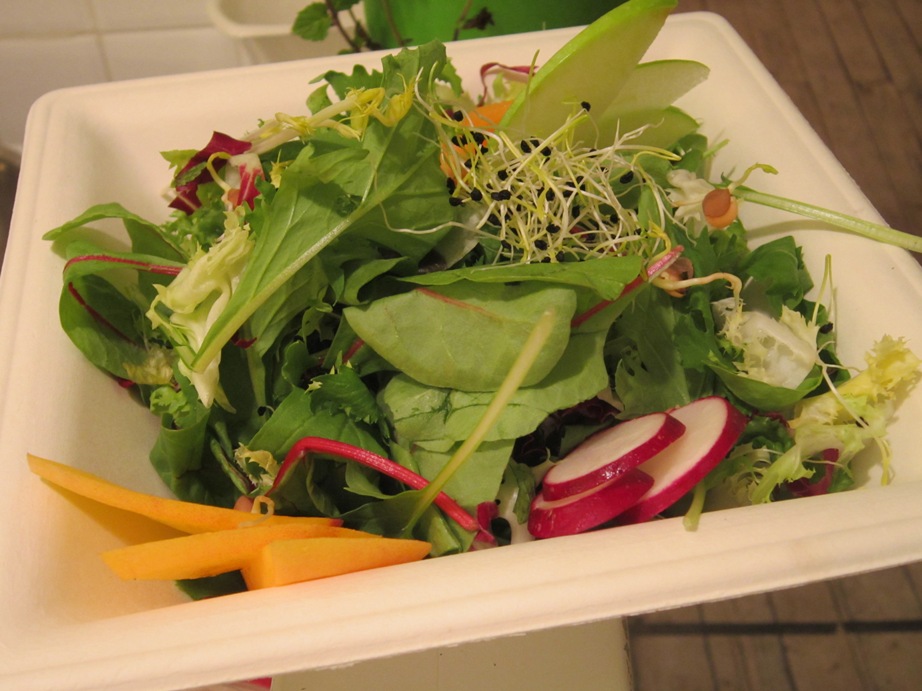 Aromaticus also participate in events, which ones have you been involved in?

FL. Over the last three years we took part in Culinaria at Garbatella and Street food at Circolo degli artisti. This year  we also participated to This is food, a fun event taking place at Officine Farneto and involving the most interesting of the Roman culinary landscape. We are also planning a series of internal events with our friends and suppliers, coming soon there willl be the Feast of sprouts,  to be organize together with Germogliamo.it, date to be confirmed.