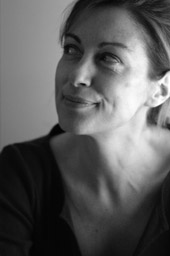 Valentina De Martini was born in Rome in 1963 on december 25th. She studied at the european institute of design fashion and jewel of rome. In 1990 she moved to london to attende a course of interior design by the pardon?s school of decoration. When she come back to Rome she worked as interior desiner 12 years long. 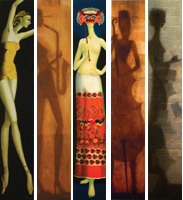 She spent the last two years combining both her experiences in fashion and design to express her personal style in paintings that syntesize the fashion and the emotion languages within their colours.  The precious panels of Valentina come from afar, from remote pasts and wonderlands. They are impressed with feminine shapes that seem to surface from the mist of the past or from long journeys. 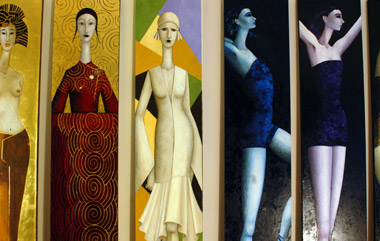 The elengated figures are clothed with refined frocks from different cultures, they draw to each other in a game of mirrors, of postures always the same, that recall one another in a kaleidoscope of colours, of precious tissues and embroideries, skin and jewels.

The faces are peaceful, past all passions, their stares calm and distant, like paradise lost, the continuum of their sequence turns into a procession, to which their hieratic appearance gives a sense of sacred that fills the surroundings. The threadlike silhouettes recall the elegance of fin the si?cle, absbourgic europe, a taste of exotic, the viennese secession, the jugendstil. The stylization of images, the linearity of design leave out all subjective individualization of the faces, thus their special character is given by few precise calls to an ethnic reality or to the fashion of a given time. The reinterpretation of later styles, closer to our times, through the same graphic language, strips the shapes of precise temporal references, creating a gallery of feminine models, icon of eternal elegance. The oil on canvas techhique, mixed sometimes with the use of pure gold, reveals a precise and light sign with a great talent of syntesis. The sperimentation is combined with her own imaginary, giving place to a repetition of images, suspended between the tale and the symbol, where the result is alwais a composed balance, not depreciated by blurs and compromises.
Valentina de martini lives and works in rome.