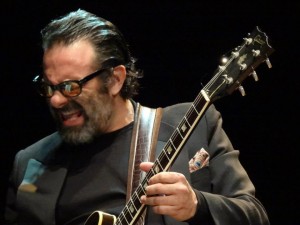 11.00 o’clock on a Thursday morning. A dark beard opens the door. The eyes are black, the smile is charming and the voice is definitely a black soul voice.

CD’s are everywhere, the guitar is sitting on the sofa and Stefano is fiddling with his mind trying to move away the night’ music is all around, his voice is on and you can smell the blues aroma coming up.

‘Playing blues for me is a strange feeling,’ Stefano said, ‘I’m an autodidact who decides, one morning, to become a bluesman while listening to Radiosveglia. Otis Spann was playing Good Morning Mr. Blues. It was like a bolt from the blue. That song changed my life; I could recognize the way I wanted to play. That’s why I’m not interested in having a cold technical approach to music but I’m focused on a simple and direct way of playing the guitar. I just want to communicate emotions to people.

What do you mean when you say that Good Morning Mr. Blues had changed your life?

Well, my love for the music was already there. I was 11 and I used to participate to Puerum, a chorus of Cappella Sistina. I took several piano and singing lessons. But that song opened my mind. From that moment I started looking for LP’s, books, information, anything related to blues. I also decided to take private guitar lessons. The idea of a Roman blues band took shape in my mind and the song Beerman was the concrete realization of such a dream. We used to play in the most famous Roman nightclubs like Jake & Elwood, Big Mama, Palladium, Geronimo, Jailbreak, Alexander Platzs, Akab. I also had performances in Roman theatres (teatro Brancaccio and teatro dell’orologio). In 92, after a period spent in Mestre where I made up the Boom Boom and Operators group, Belzeblues was born. It was a rock-blues group very popular in Rome that used to play in the most famous nightclubs of Italy. I also started to work on radio jingles and to compose several soundtracks.

What about your present life?

Today I’m the voice and guitar for the Stefano Malatesta Trio, I’m the Art Director of RADIOZONA, a Roman rock band. I am also an arranger and producer and currently I’m collaborating with Lily Latuheru, a grate Dutch singer. I’ve crystallized a 15 year compilation with the ‘HANDLE WITH CARE’ CD. I’ve recorded a CD entitled ‘ONE STEP” as a project between the trio and Lily Latatuheru. DUA is the name of this quartet. Now I’m working on my third CD which represents a new paragraph in my life. I will sing in Italian and the blues intention is always present. This CD is characterized by a completely different style’only Stefano Malatesta songs.

Why did you decide to organize the Roma Blues Festival last October?

I organised the festival as a member of Stranote, an Italian cultural association. In our opinion it was important to have space like that in the Roman musical panorama. This was the first blues festival organised in Rome. I couldn’t believe that so many people would be interested in it. We organised 6 nights. There were groups like the Red wagons, the Stone washed, the Chicken scratch, the tolo marton & Lostiguana’ Also the Stefano Malatesta trio participated. It was like a group of friends playing together. There were no sponsors and the organisation was ‘handmade’. The participation of a huge number of people and the success of this edition convinced us to repeat the experience, probably next spring. It was a great success.

Any suggestions for listening to good blues in Rome?

Are Romans keen on the blues?

There is not a deep-rooted culture of blues but, on the other hand, those few people who enjoy listening to blues music are really into it. From a technical point of view, blues is not a difficult kind of music but it is really important to have the right intention/ motivation when you listen to it. It also needs a great deal of passion and, again, a strong motivation when you play. It’s not a technical genre of musical; it is relatively simple. The point is that if you play without passion it doesn’t work. That’s why the blues public is really affectionate.

Time flies on blues sound and the moment to say goodbye quickly arrived. Traffic imprisoned my car. I tried to abstract myself from such chaos and turned up the volume of my car stereo. The Stefano Malatesta Trio was playing Chissa perch’. I forgot the traffic and a fantastic trip began.

About the Stefano Malatesta Trio

The trio plays in the main nightclubs and theatres of Italy. The ‘HANDLE WITH CARE’ CD, recorded in August 2002, sounds exactly like a Stefano Malatesta Trio live performance.