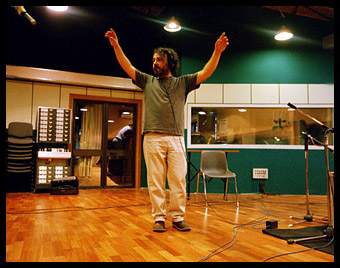 Among piazza Vittorio’s arcades, in the middle of the multitude of the many ethnic groups living in this area of the city and the craze of the many shops, we have met

Mario Tronco, director and creator of one of the most interesting multi-ethnic realities of the moment, the ‘Orchestra di Piazza Vittorio.’ this is the biggest European multiethnic ensemble composed of 15 musicians, 11 Countries, 3 Continents and 8 languages.

Mario has welcomed us during a pause in the band’s rehearsals in his big house on the second floor; the ambient is full of music coming from inside the house and from the street. Leaning out of the window, in fact, you can feel all the different sounds coming from the lively microcosm in the square.

From which idea was the ‘Orchestra di piazza Vittorio’ born?

The idea is naturally born from the color of your skin when you live in such a place. What is really astonishing is the multitude of languages, sounds, and colors living together and representing a chance of peaceful cohabitation that up to now happens only in working contexts, but we hope will extend to other ones. When you go to the market during the day, it seems as if cohabitation could be possible, but during the night when the square becomes obscure and silent, then everything seems to be impossible. This contradiction for me is a big social and musical spur, and the project was born exactly from here. It’s a real challenge! 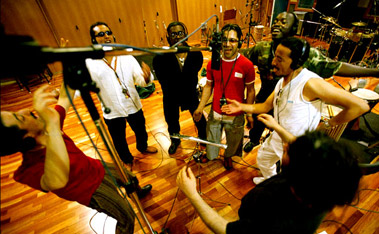 Was it difficult to put the band together?

The first phase was really hard and discouraging, because at the beginning we didn’t have any deadline, nor could we propose one to the musicians. During the first six months I was busy  explaining the project to the musicians, I even tried to ‘sell’ the name of Avion Travel (the Mario Tronco historical Italian band), but the results weren’t rousing, we even tried to find musicians through different channels: newspapers, leaflets, and the internet with the same poor results. We have to thank Agostino Ferrente, president of the association Apollo 11, he believed in the project since its beginning and has sustained it with enthusiasm. Without him the Orchestra would not exist because I am, as is every man from Caserta, very lazy, and I would have given up. By chance one evening, during an informal dinner, we met one of the RomaEuropa Festival organizers, Monique Veaute, and she has been so nice to offer us a performance at her festival. This fact gave us a great push. I wrote the music and finally we could offer something concrete to the musicians. 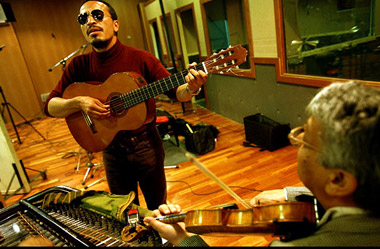 What was their reaction about finally playing an important event together?

As soon as I had a date and a budget for the rehearsals, all of them were surprised. Then I realized that for the foreign musicians it was not automatic to be paid for the rehearsals. In reality they are not used to being treated as professional musicians, that’s the fact! Once the music was composed, I was able to think about which kind of musicians I needed and the search this time was much easier.

Musically speaking, did your idea interested the foreign musicians?

Yes, it did. At the beginning they didn’t understand the wattle of music and tonalities, everyone recognized pieces coming from his own land and at the beginning there was even some jealousy, as if they felt usurped of their origins, then they all understood the idea of the project and liked it a lot. Especially when we began to play live, and for the first time everyone was face to face with so many different instruments. The results have been exciting.

Do you rehearse regularly?

No, the Orchestra is completely self-managed, we rehearse together live only a few times, and we improvised a lot

Since  your first CD has been on sale?

The CD contains 10 pieces I composed with other musicians from the orchestra. I also mixed songs from the Avion Travel group; I tried to put together different sounds and melodies. Anyway, every time we perform live the result is different; there’s a lot of improvisation, one piece can last seven minutes, but during a performance it can last 20 minutes. All the musicians are very amused by the changes we make during each performance.

What about your future projects?

There’s a great project for 2006 together with the Avion Travel for the centennial of Cgil (Italian Labourers General Confederation). We are working on a project about political and working songs and the idea is very stimulating for us.