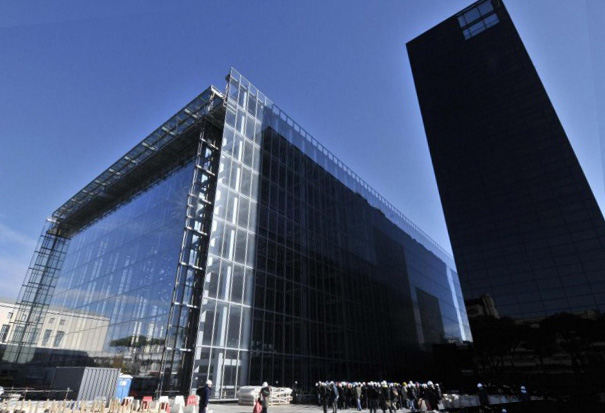 Do you know what is the greatest mystery present in Rome? Many people will answer: “The Cloud” (La Nuvola) by Fuksas.

Massimiliano Fuksas is the “father” of “The Cloud”, the largest congress center in Europe, located in Rome’s EUR district. The work of 27 thousand square meters and the total cost of € 276 million, after seven years of work is still unfinished. It had to be opened in 2010 but is still only a work in progress. 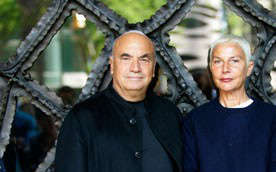 But what is “The Cloud” ?
Public work, Private, a congress, an architectural work? But in the end what will? In Rome a lot of people has heard of it but almost no one is yet to be able to describe  or represent it.

The Romans did not know precisely what is happen at that site on the  Cristoforo Colombo Street, a major highway and very high flow. The Romans are accustomed to follow “Via Cristoforo Colombo” it over the weekend also to reach the sea and every day thousands of people pass through it to go to the center and to return home from work.
Anyone who has passed for “LA Colombo”, so ‘it is called, has certainly noticed the yard at least once. It is always there for years and some consider it a symbol of the waste, the bureaucratic slowness, inability to complete an architectural project so challenging.

Compared to the original plans, many things have changed. About 10 years ago there was a show in which they were put on display the project architect Massimiliano Fuksas and that really seemed almost magical.
The absurdity of this story is that the exposure of the projects was made to ‘former barracks Montellone own area where he was born on MAXXI, the National Museum of Modern Art designed by architect Zaha Hadid that was inaugurated on May 28, 2010.

In the meantime Rome changed 3 mayors of the City and for the opening of “The Cloud” instead you should still wait.
It was 1998 when they won the race to the Convention Center was Massimiliano Fuksas and that he was appointed director of the work. The design lasted almost 7 years and the architect wanted the Congress Centre was a huge structure of 55 thousand square meters, made of steel and glass, 40 meters high, 70 wide and 175 long. Within this area there are conference rooms , shopping areas, a hotel and, above all, the extraordinary room–auditorium called “The Cooler“, which was envisioned as a container in the shape of a cloud, covered by a membrane of fiberglass and silicone to give the sensation of floating ‘inside the shrine itself.

The work is not yet complete and is currently estimated at 80% of its total realization. After a new injections of capital (more ‘than € 250 million currently spent) the municipality said that it could complete the work by the end of this year without the architect Fuksas, who has since been dismissed.

It sounds like a crazy story but it is true, the architect Massimiliano Fuksas has been relieved of his duties by the management company because of the high costs.
It ‘s difficult for a foreigner understanding how an architet superstars (archistar) of this magnitude to be ousted by 80% of the construction work after having spent a mountain of money. According to the data read from the network and supplied Eur SPA, the architect would have received 4.5 million from 2008 to 2013: 1.8 in 2008, 2.15 in 2011, € 611 thousand in 2013. So in total, starting from 2001, and considering the costs of design, Fuksas would have earned about 20 million Euros.

Currently the city of Rome is in a state of decay very strong, the same district of the EUR has many buildings have been disastrous.

Around the yard of the cloud, there are some small skyscrapers (in Rome is a 10-storey skyscraper to be a) in a state of disrepair and for a long time. These buildings are at the gates of Rome overlooking the little lake and are the first thing, after the sports hall, you will notice if you are coming to Rome from the sea.

i3factory.com
One comment to “Waiting for The Cloud of Rome”