Backed by an important international success with critics and audiences – United States, France, England, Spain, Australia, Argentina, Uruguay, Estonia, Portugal – Caina (produced by Movieland and distributed by mOOviOOle) is Stefano Amatucci’s debut feature film who, after a long experience as a television director (A Place in the Sun and The Team), signs an extreme and courageous work on the horrible theme of wild immigration, related interests and the inevitable racism. In a visionary and dystopian present, on the shores of a generic Mediterranean, the story of Caina, of the craft trovacadaveri (corpses finder), is consummated, and its relationship victim-executioner with the Maghreb Nahiri, at the center of a real war of civilization. The protagonist of this feature is an almost demoniac Luisa Amatucci in the role of Caina; a tender and, in some ways, fragile Helmi Dridi in the role of Nahiri; the realistic Gabriele Saurio in the role of the cynical Taurul. A priceless Isa Danieli, interpreter of the cynical Signora Ziviello.
The screenplay, signed by Stefano Amatucci and Davide Morganti himself, is freely inspired by Davide Morganti’s novel of the same name (Ed. Fandango Libri).

The only Italian film in competition at the 20th POFF Tallin Black Night Film Festival, Caina is Stefano Amatucci’s first feature film. The director known for his television career, in which titles such as A Place in the Sun and The Team emerge, signs a courageous work on the horror of wild immigration and the even more horrifying horror of the racism of the host, and of the business that it gets out of it. 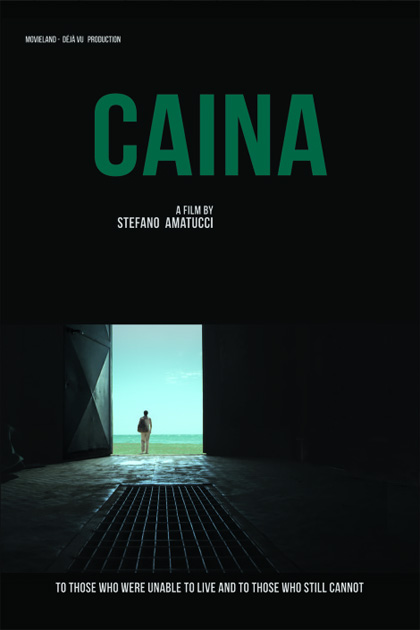 Synopsis
The protagonist in the past was a killer on commission, killed coldly and acted with contempt, specialized in killing non-EU citizens, because his is a xenophobic spirit, violent and with a visceral hatred for everything that does not belong to his language, to his race and above all to his religion: he embodies the commonplaces and fears of those who have a rough vision of Islam. Now she spends her nights on the beach where she does a particular job, the “trovacadaveri”: her task is to collect all the drowned bodies of non-EU immigrants from Africa trying to arrive in Italy and that the sea pours on the shore. She hears the dead speak, be afraid, complain, she listens to the sufferings, the anguishes, the disappointments. Stray corpses are disposed of by dissolving them in cement at a state disposal center.
You earn 15 gross, on each drowned. Nahiri, a Tunisian, also makes the “trovacadaveri” (corpses finder), but is abusive. Together with a group of irregular immigrants, to survive, they go around stealing the bodies of immigrants from the banks, selling them under the counter to the disposal center thanks to the connivance of its manager, the elderly lady Ziviello, who operates in malfeasance. The goods are difficult to recover, so the abusers decide to drown at sea those who arrive alive. Nahiri is not there and abandons the group offering to work for her by submitting to it. They look suspicious, they smell like beasts. A war of civilization is unleashed between the two.
Both live, however, with the constant fear of being robbed by other abusive non-EU citizens.