Rome September 22, 2018, with the Rome Central Magazine troupe we try to reach Piazza del Popolo where the Vertical Movie Festival takes place, which was announced for the summer. At the festival we see few people, perhaps because postponed in September due to the lack of “vertical” cinema content.

The videos in competition can be viewed on YouTube on the Festival Channel:
https://www.youtube.com/channel/UC4Eo5YqU_GkUkAFIt2tvjiQ/videos

Numbers
Some data taken from the web claim that half of 2018 seems that 7 billion videos are seen every day on Snapchat, a smartphone application that stimulates vertical use. But we must distinguish simple video chat or social with “the Cinema” as an art form otherwise we can argue that billions of paintings are produced per second just because you write something every day … But the Snapchat press office reveals that there are many vertical advertising spots that, on the mobile phone, are seen up to the end 9 times more than those in horizontal. Important but a spot is very different from the “Cinema”.
These are the millennials, according to Advertising Week, that mostly watch the video spots on mobile phones compared to those on TV.

Considerations
It’s definitely time to take vertical videos seriously because apps like Periscope, Snapchat and Instagram, Facebook directories etc … are very popular and are designed only for vertical videos.
Perhaps this is why the BBC, the Washington Post, the National Geographic and other important newspapers have started producing content in vertical format dedicated to smartphones.

It therefore appears a question of numbers and not an artistic question. The video on the phone grows exponentially and it seems that more and more people spend a lot of time to view video content on their mobile in “vertical“ 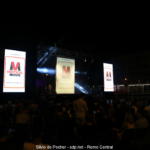 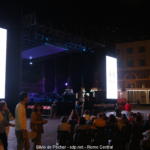 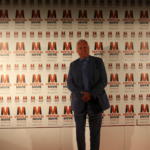 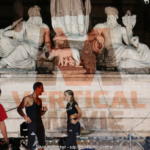 But here’s a surprise: someone tell us that the painter/director Peter Greenaway will be at the festival because he believes in the future of cinema in the vertical … then I must have missed something? Still does not convince me this idea of ​​a vertical future, but after seeing the old b-movie Idiocracy in an afternoon of projections of cult comedies, started with the vision of “Amazon women on the moon” by John Landis, we decide to go and ask Greenaway to give us some inspiration and to reveal our vision of the future to us.

Peter Greenaway as a painter just does not convince me, I am interested in modern art but I find nothing new in his works and, although it is pleasant, I see nothing better from the many wonderful installations of young artists that we often meet in the articles of the Magazine. As a director I considered him a kind of “sacred monster”, almost undisputed since at the age of 15 I will get a VHS with his first film … then years later among intellectual friends it was fashionable to do evenings with projections of his films more “picturesque” as I thought it was an undisputed myth …

It’s impossible for me to expose his thoughts,

The wise man knows that one should never meet our favorite artists because the risk of disappointment in dealing with the narcissism of man is very high … and this is one of the rare cases in which – by my own ignorance it is clear – the the great artist of the Welshman Peter Greenaway could not shield the arrogance of the man who allows himself when and as he wishes he may be accustomed to having in front of a fascinated audience  … but this time the flights farther to try to defend this vision of the “future vertical cinema” is full of holes… but we know today the world is social and the planetary elite admires from the stands the immense plebs who imagine themselves protagonist with cell phone in hand and a virtual profile with many friends and followers … maybe little has changed since the aristocrat on duty lowered his thumb in front of a pit in delirium to punish the Christian or the gladiator in the arena of self-control.