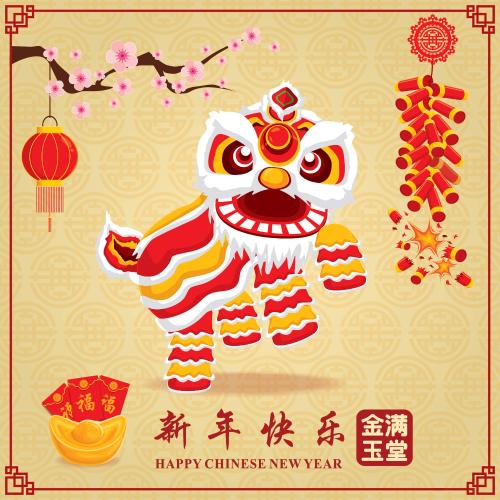 Chinese New Year, or Spring Festival, is a increasingly known and heartfelt celebration in Rome. This ancient feast is organized by the strong Chinese community in the Capital and is characterized by a series of events and initiatives.

Chinese New Year, known in modern Chinese as the “Spring Festival” (simplified Chinese 春节; traditional Chinese 春節; Pinyin: Chūn Jié) in Mainland China, is an important Chinese festival celebrated at the turn of the traditional lunisolar Chinese calendar.
Celebrations traditionally run from the evening preceding the first day, to the Lantern Festival on the 15th day of the first calendar month. The first day of the New Year falls on the new moon between 21 January and 20 February. In 2017, the first day of the Chinese New Year is on Saturday, 28 January, initiating another year of the rooster.The New Year festival is centuries old and gains significance because of several myths and traditions. Traditionally, the festival was a time to honor deities as well as ancestors.
Chinese New Year is celebrated in countries and territories with significant Chinese populations, including Mainland China, Hong Kong (officially as Lunar New Year), Macau, Taiwan, Singapore, Thailand, Cambodia, Indonesia, Malaysia, Vietnam, Mauritius, and the Philippines.
Chinese New Year is considered a major holiday for the Chinese and has had influence on the lunar new year celebrations of its geographic neighbours.. (wikpedia) 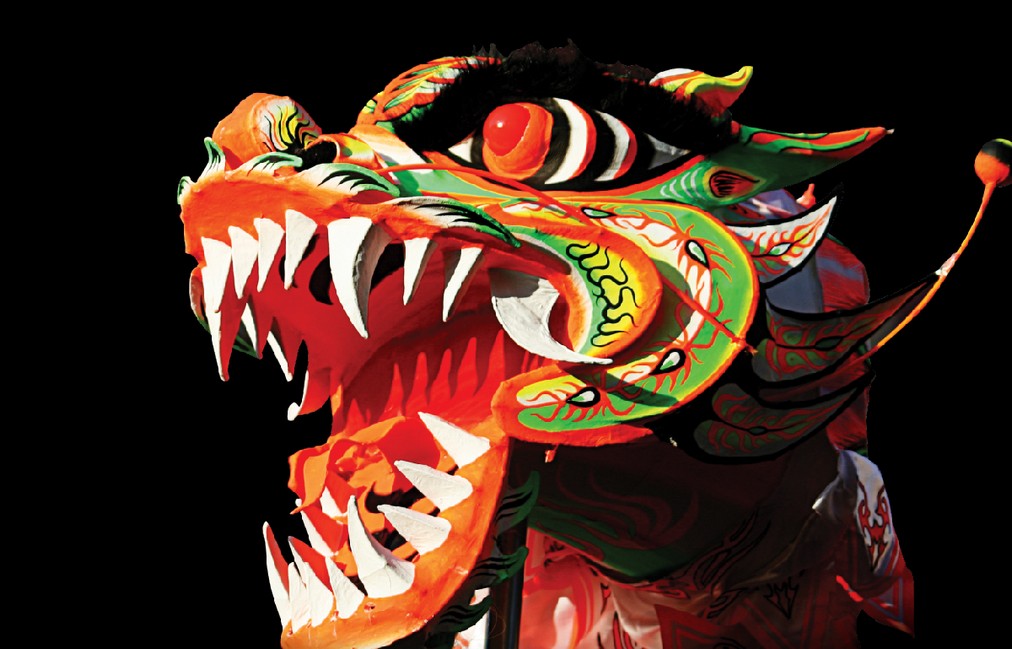 This celebration has its origins in an ancient legend: in ancient times in China, populated by the Nian monster, every twelve months Nian left the den to feed on human flesh, causing panic among the people.
Legend has it that the monster is just scared with the vision of the red color, the loud noise could scare it away too.
A consequence of these legends that people wear red clothes to celebrate the arrival of the Chinese New Year and then explains the tradition of the fireworks, as well as music, singing and dancing even today, on the occasion of the Chinese New Year, help expel bad luck.

According to Chinese mythology, a Nian (simplified Chinese: 年兽; traditional Chinese: 年獸; pinyin: nián shòu) is a beast that lives under the sea or in the mountains.
Once each spring, on or around Chinese New Year, it comes out of hiding to attack people, and prefers children. Weaknesses of the Nian are purported to be a sensitivity to loud noises, and a fear of the color red.
The Chinese Lion dance (Chinese: 舞龍舞獅) is known to have originated from the legend of the Nian. The tradition has its origins in a story of a Nian’s attack on a village. After the attack, the villagers discussed how to make the Nian leave them in peace. The traditions of firecrackers and red robes found in many Lion Dance portrayals originate from the plan the villagers had in which drums, plates and empty bowls were hit, red robes were worn, and firecrackers were thrown, causing loud banging sounds that they hoped would intimidate the Nian. According to this same myth, the Nian never appeared in the village again.
The Nian was still believed to exist, but was never expected to make an appearance to a human again. It thus became symbolic in the eyes of the town people, and they continued doing what was needed to drive it away. With time this became a tradition. (Wikipedia) 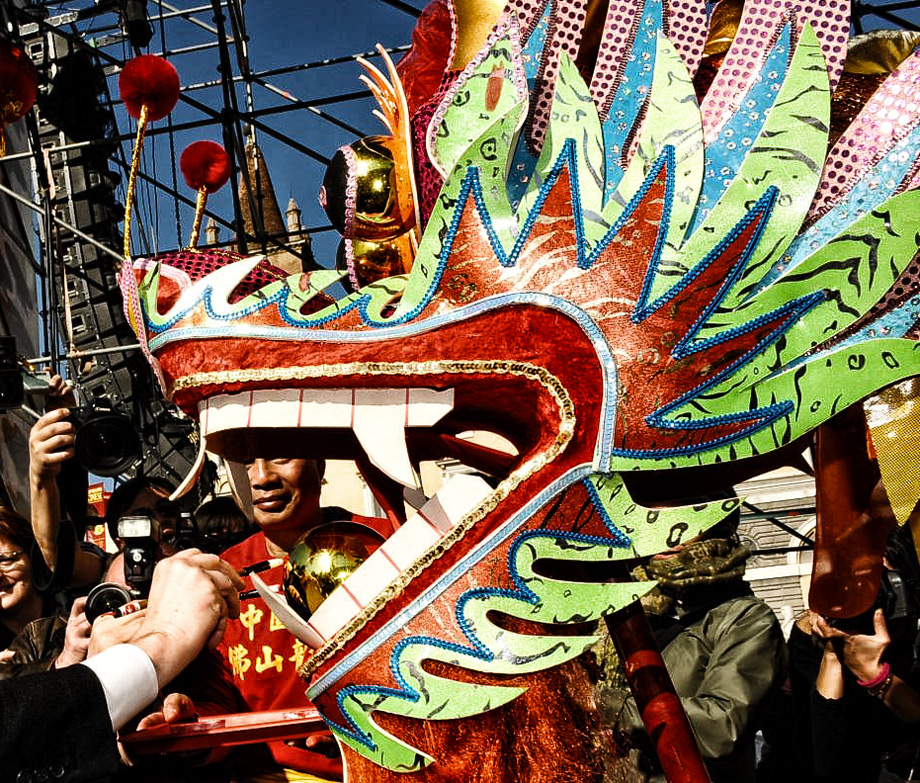 This year (2017), the anniversary falls on 28 January  and represents a good opportunity to learn about the multi-ethnic and cultural aspect of the city of Rome.
For the anniversary are planned various initiatives involving citizens all ages and which mainly involve the Esquiline district, home to the Roman Chinese community, Via del Corso and Piazza del Popolo.

Each year is linked to an animal sign following 12-year cycles, 2017 will be the year of the Rooster,
then Saturday will celebrate the arrival of the year of the Rooster and greet the old year of the Monkey.
The Spring Festival, the Chinese New Year takes into account the cyclical succession of the Chinese zodiac signs 12 counts of animal (Mouse, Buffalo, Tiger, Rabbit, Dragon, Snake, Horse, Goat, Monkey, Rooster, Dog and Pig). Chinese tradition has it that the party should be celebrated with a lavish banquet that is called “Dinner of the meeting” where families gathered for the occasion in homes. The houses, as well as the streets are adorned with ribbons, lanterns and good luck messages all strictly red.
Even the Chinese, just as Italians, are convinced that a good start to the new year bring good luck and benefits, and on this day we will exchange red envelopes containing money and move away evil spirits with Lion Dance.

Traditional events of the Chinese New Year in Rome include a series of traditional Chinese performances. We will have entertainment, music, games and gastronomic tastings suitable for small and large.
The event not to be missed is the parade with dancing dragons and Chinese lions that usually unfolds in a colorful procession of dancers and musicians.
This year it start with the stalls in the streets of the Esquilino area at 12.0o, up to the procession in Via del Corso, which will begin at 14:30 (2.30 pm) and will end at Piazza del Popolo where successive performances of theatrical street art, music and martial arts with performances of Chinese artists who wear clothes and accessories folklore.
Do not miss the red lanterns, while Chinese dishes are offered not only in city restaurants, but also in temporary banquet arranged in the areas involved.
It ends with the traditional fireworks, an art of which the Chinese have always been masters.

14.30 Parade on the Via del Corso to Piazza del Popolo

At 15.00, there will be ‘show of martial arts and acrobatics.

After the show, there will be fireworks.

Saturday, January 26, 2017 we love photography, even with the phone, with the Photography Social Club Roma, sponsored by our Magazine Rome Central  we will photograph the various folklore events of the Chinese New Year in Rome which will take place between Piazza Vittorio and Piazza del Popolo.

Between 12:00 and 14:00 in Piazza Vittorio should be set up stalls with Chinese products, especially culinary. Then we’ll move on via del Corso, where at 14.30 by way of the Popes start a folkloric parade which will arrive in Piazza del Popolo, where the 15 will start the show that will end at around 17.30 with fireworks.

Who will fail to come to the meeting of 12 to via Merulana will reach the group of photographers at 14.00 in front of the Adidas Store in via del Corso 475.

The participation is free.