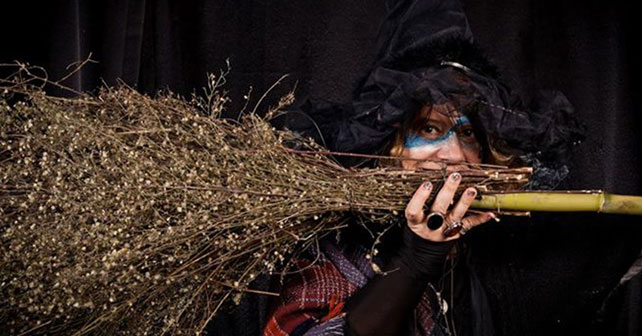 The feast of the Epiphany in Rome comes on January 6, which corresponds to the Christian feast of the Epiphany. Collecting has always been a great success especially in the context of events in his honor. Before Santa’s success, which became popular pià only after the Second World War, the Befana was expected by all Roman children for the presents and her cakes.

A traditionally Roma important gifts were exchanged on the day of the Epiphany is a very important figure of the folklore of Rome and other areas of central Italy. 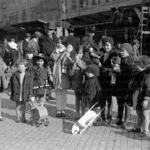 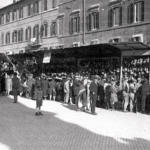 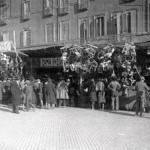 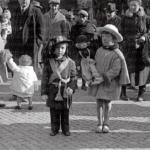 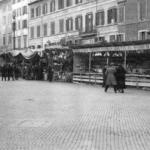 Legend has it that the witch-face visit to the children during the early hours of the Epiphany (January 6) to deliver real fill the stockings, which are hanging in the kitchen with sweets and coal. Coal is delivered only to the children that during the year have misbehaved while the “good” children  receive candies and chocolates. La Befana is often described as an old woman riding a broom, with the features of a good witch.

In some regions of Italy, such as Lazio, the Befana is a very important figure and is the last feast day where important culinary fairs. January 6 is also the last in which you hold the Christmas tree at home.

According to popular tradition, the Three Kings, directed to Bethlehem to bring gifts to the Christ Child, failing to find the way, they asked information to an old woman. Despite their insistence, in order to follow them to visit the small, the woman left the house to accompany them. Later, pentitasi not have gone with them, after preparing a basket of pastries, she left the house and went to look for them, but he failed. So he stopped at every house that was on the road, giving candy to children he met, in the hope that one of them is the baby Jesus. Since then would turn to the world, making gifts to all children, to be forgiven.

Traditionally in Rome many families every year gather in Piazza Navona to celebrate the holidays, meet the Befana and savor its sweet present at banquets present in the square. One of the most coveted sweets from us children when they took us to Piazza Navona was the so-called “Poison Apple”, strictly a fruit covered with a shimmering layer of red blood sugar.

Epiphany, also Theophany or Three Kings’ Day, is a Christian feast day that celebrates the revelation of God in his Son as human in Jesus Christ. In Western Christianity, the feast commemorates principally (but not solely) the visit of the Magi to the Christ child, and thus Jesus’ physical manifestation to the Gentiles. Moreover, the feast of the Epiphany, in some Western Christian denominations, also initiates the liturgical season of Epiphanytide. Eastern Christians, on the other hand, commemorate the baptism of Jesus in the Jordan River, seen as his manifestation to the world as the Son of God. The traditional date for the feast is January 6. However, since 1970, the celebration is held in some countries on the Sunday after January 1 (source: wikipedia) 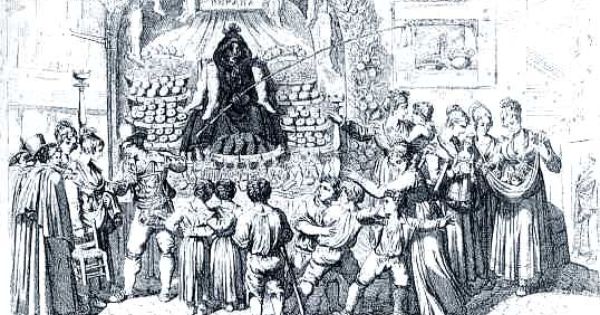 Befana sitting amidst the harvest – by Bartolomeo Pinelli, 1825

Historical background
The term “Befana” comes probably from “Epiphany”, reconnecting to the etymological sense of “divine manifestation”: originally the day of Christian nativity was not in fact celebrated on December 25 but just 6 January. With the spread of Christianity and the need to counter the use of ancient pagan festivals, the Church of Rome set in motion a real process of assimilation of pagan rituals in Christian holidays, in order to “ferry” the people from one religion to another while maintaining intact the ritual structure. So the day of the Nativity was brought forward to December 25, day of celebration of the Natalis Solis Invicti, solar-type cult widespread in Rome from the third century d.C .; in this way the celebration of the “Sol Invictus” would simply transformed on the day of the Nativity of Christ, the figure often associated with the light and the sun, such as in depictions of the halo.

THE EPIPHANY FEAST IN THE WORLD

Befana and Epiphany in Spain
January 6, all Spanish children wake up early and run to see the gifts that the Magi have left. The previous day put before the door a glass of ‘water for the thirsty camels and even some food and a shoe.
In many cities it held the procession of the Three Kings, where the Kings parade through the streets of the riccamenti decorated floats.

Befana and Epiphany in France
On the day of ‘epiphany is used to make a special dessert, all’ inside of which lies a stone. Whoever finds it gets to that day the king or queen of the party.

Befana and Epiphany in Russia
The Orthodox Church celebrates Christmas on January 6. According to legend, the gifts are brought by Father Frost Babuschka accompanied by a nice old lady.

Befana and Epiphany in Germany
This is the day of the coming of the Three Kings. Often the priests and the altar boys go into the homes to ask for donations, and usually also recite or sing a few Towards a sacred song. People of Catholic faith go to church, to church, but in Germany on January 6 is not a public holiday, you work as usual and the children go to school.

Befana and Epiphany in Iceland
January 6 is called the thirteenth, because from Christmas until this date spend 13 days. This is the last day of the festive period when you say goodbye to Christmas. It begins with a torchlight procession, which also involves the king and queen of the elves. Halfway also comes the last of Santa Claus, the thirteenth (the first Santa Claus comes the ‘December 11 and then comes one every day until Christmas, then from December 25 onwards will go away one day). The torchlight procession ends with a bonfire and with d ‘fireworks.

Befana and Epiphany in Hungary
The day of ‘epiphany children dress as Three Kings and then go from house to house carrying a crib and in return receive some money.

Befana and Epiphany in Romania
Of the ‘epiphany feast it represents the coming of the Three Kings and is a public holiday. Even today in some countries, children go through the streets and knocking on doors to ask if they can come to tell stories. Usually as a reward they receive a few coins. Even the priests go from house to house to bless the houses. (Souce: ilnatale.org) 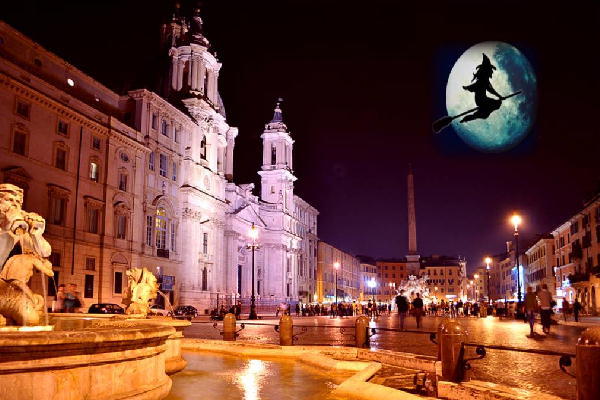 Epiphany 2017 Rome, what to do to celebrate the Epiphany?

Befana 2017 in Piazza Navona
At 11:30 with a concert by Louis Schneider and then onward to 12 with the voice of the singer Alberto Mieli addition to the representation of the Theatre of piedicon Monsieur David.
17.30 Piazza Navona will welcome the procession of the three kings, escorted by a troop of honor of the Regiment Lancers of Montebello dressed in period uniforms, and with a retinue of pages and shepherds.

EPIPHANY VIEN NIGHT | XIII edition in Ostia
At the Teatro del Lido di Ostia 01/06/2017 Entertainment, Theatre adults and kids.
Via delle Sirene, 22, 00121 Lido di Ostia Rome, Phone: 06 564 6962 The Allegra Vane has EPIPHANY VIEN NIGHT | XIII edition by Catia Castagna Bruno Tognolini, Theatre of the Underground, The Grandchildren of Bernardone, The Dolores Picasso, Storage of seeds and much more. set design by Simone Perra- Entertainment for all ages free admission.
A day where most artists perform to give an afternoon of celebration for families and give new life to the popular tradition of the Epiphany in Rome. Event of theater, music and storytelling for families and children of all ages. In the house of the Epiphany, coal and tangerines for everyone. Entertainment for young and old, witches with their spells and their magic. Many fictional characters, funny and distraught, unusual antique and poetic goblins. Installations by Simone Perra and Seed Warehouse; The music with Dolores Picasso; magical stories, told by Bruno Tognolini; clowning, juggling and acrobatics with The Bernardone Grandchildren and their “Hope! hope! Hopla “. And much more. Please join us in the fantasy swirl below the most magical night of the year.

The Sand Crib
From December 24 2016 to Sunday, January 8, the Sand Nativity is one of the most striking events is in its fourth edition.
Made in a cave located in the heart of the Casalbertone district, the Nativity was built a few meters from the ancient paving in porphyry with a very special sand: it is of a particular sediment deposited by the river Tiber in the Pliocene to the end of the last ice Age. Being very fine and clean, it is a perfect sand for the construction of similar sculptures.
Admission is free to all for free.

Exhibition The Art of the Brick in Rome
Do not miss the exhibition “The Art of the Brick” at the Auditorium Parco della Musica (Viale de Coubertin 30). One of the most important events of the moment, and boasts a wide variety of works ranging from simple human figure to that revisited in the art, such as the reproduction of the “Mona Lisa” by Leonardo Da Vinci or “The Scream” by Munch, a skeleton of dinosaur T-Rex, built with over 80,000 bricks. , Depictions of the Sistine Chapel and the “Starry Night” by Van Gogh.
Show times from 11.00 to 22.00, the cost of the ticket is rather established as follows: Full price: 16 Euros (+1.50 euro presale) generic Concessions (over 65, under 12, military, cral, media partners, disabled *,) : € 12 (+1.50 euro presale) Reduced groups (minimum 25 people): 10 € (+1 euro presale) Reduced schools (for a minimum of 15 pupils): 8 € (+ 1 euro of presale)

La Befana at Rome Biopark
The Zoo of Rome from several years turned into Biparco Rome.
Provided many recreational and educational activities suitable for children from 09.30 to 17.00, all included in the ticket price.
Accompanied by their guardians, children can discover what they eat the animals in the bio-park and watch the show at two different times: at 12.30 or 15.00 that features the Sofia.Inoltre elephant will be provided close encounters with cockroaches blowers , ferrets, frogs and many other animals which are often afraid, but they are actually very important for the ambiente.Per access to the Bioparco, the cost is: € 16.00 for: € 13.00 for adults: children over height 1 meter and up to 10 years; over 65 daily (except Wednesday, for which the ticket costs € 6.00 *); groups for free visit (for a minimum of 15 paying) € 10.00 for: invalids and handicapped. Free for: Children in height less than 1 meter