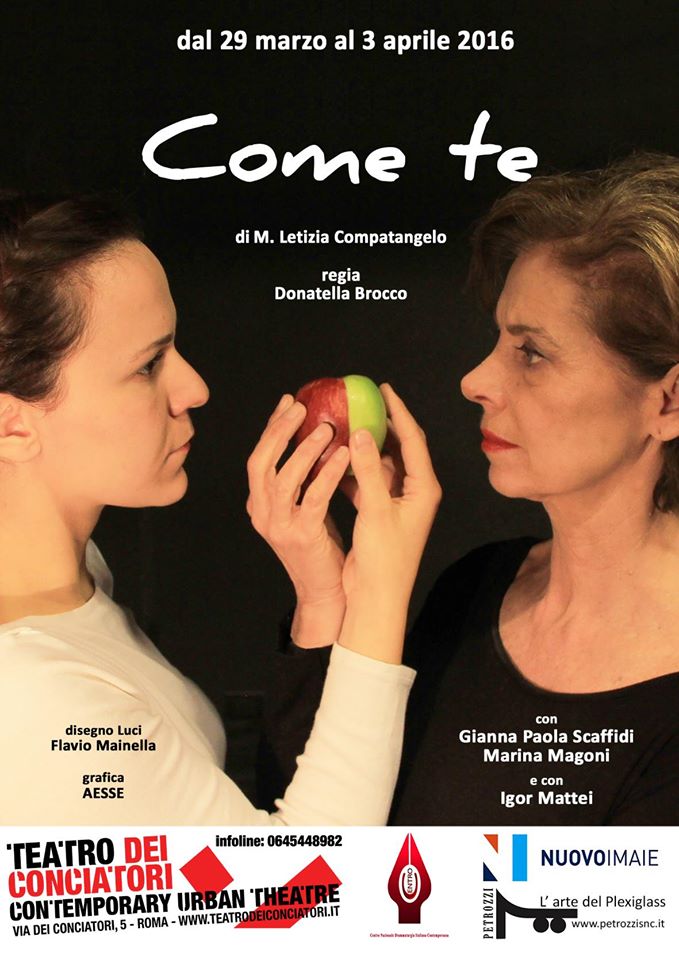 We witnessed “Come Te” (trad. “Like You”), a new theatrical text written by Maria Letizia Compatangelo. The show is directed by Donatella Brocco e starring Gianna Paola Scaffidi, in the picture, together with Marina Magoni and Igor Mattei.i.

Here are some impressions of our editor Enrico Ragna:

The representation divided into 2 distinct parts: the “Bluff”, and the “Reality.” A young foreigner who pretends to be a job candidate is examined by a mature manager. After partecipating in teh selection, the girl discovers her cards and undergoes the reaction of the “rival in love”. It turns out then that the husband of the manager had a daughter with the young candidate.
The young foreigner, with short life expectancy, proposes to replace rival in the growth and education of her daughter.
The initial refusal of ex-wife, is then won by his maternal spirit to triumph in the final of the play.

Excellent proof of the protagonist, who leaves behind his wife’s pride wounded by abandonment of her husband, and with a feeling of rebirth she accepts the challenge that is proposed. Two women won by grief and despair, illuminated by the life of the new born as a revenge to their deaths ….

The ingredients inserted by the author, Maria Letizia Compatangelo, are:
Illness. Rebirth. Abandonment. Pride, revenge, against an unjust life, the magic of the gift.
The generational comparison of the career woman, mature and self-confident, and the young novice, unripe fruit eager to learn from her and from life.
The comparison is between two very different women with one another, so that will force them to get naked.
The brief meeting between the two women reserve several twists through which the author shows that sympathy, solidarity, prejudice, rivalry, pain, anger, instinct and conscience of the maternal role coexist at the female.
Like you then is the mirror of the reality of the moment, contemporaneity, revealing transparency in the deep heart of any woman.

Born in Perugia, graduated in Economics at the University of Siena. Consultant for multinational corporations, passionate about marketing and history, has always been a theater lover.