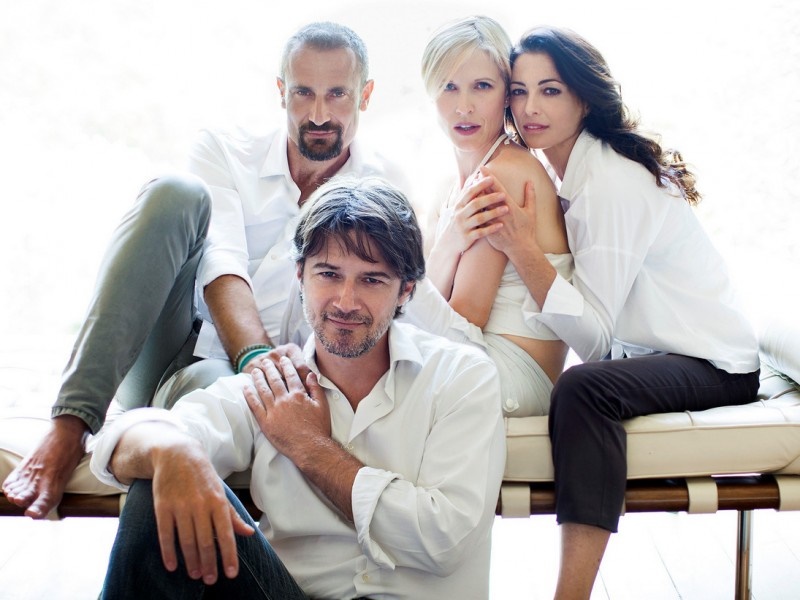 About The comedy ” Love makes life better ” by Angelo Longoni , staged at the theater Sala Umberto from 9 to 21 February 2016, it was written and said a lot these days.
The show was a great success with audiences and critics , also because it addresses issues of urgent relevance in the social landscape of the country, since in recent days is discussed in Parliament on the civil rights of unmarried couples and gay couples. The family, as a traditional institution , these days is questioned or defending a sword , splitting public opinion in opposing factions. The answer to every dispute could be as simple as the sentence that gives the title to this comedy , ” Love makes life better“. 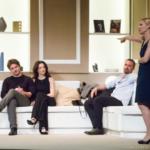 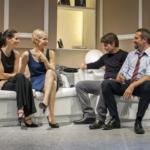 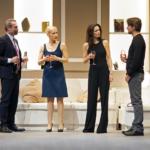 The problem is how to recognize love when it is hidden and stifled by feelings such as fear and frustration and social prejudices . This fact speaks the play by Longoni, staging the story of two forties pairs of bourgeois struggling with a “hot potato”: their children barely legal boys, Edward and Matthew, were reported by the school janitor, because they have been caught getting cozy. They risk suspension and non-admission to final exams.
The gravity of the situation requires parents to face the problem together and decide to do it over dinner. In the meeting, friendly, what began as a civil hypocritically confrontation slowly turns into a war between opposing conceptions of life and family relationships.
The four characters on stage are antithetical characters that lend themselves well to generate a hilarious and bitter conflict at the same time. Marco (Giorgio Borghetti), father of Edward, is a crude bourgeois that has been enriched with a company of tiles, indulging in bribes and work in black of his workers; Edward’s mother, Anna (Gaia De Laurentiis), is a repressed housewife who constantly dreams of a different life, but do not risk anything to achieve it, the slave of an obtuse and bigoted respectability; Franco (Ettore Bassi), the father of Matthew is a snobbish and nonconformist artist, who stands on a pedestal and despises with disenchanted cynicism with everything and everyone, resulting in frustration and inadequacy in his wife Silvia (Eleonora Ivone), pink gravure journalist by open views. So the battle is assured and resolves in a climax that brings the characters to a game in the massacre, where no one is spared and are dissected mercilessly weaknesses, meanness, hypocrisy and torque unsolved problems of all four. A comedy in the style of Neil Simon transcends slowly in an atmosphere more reminiscent of “Carnage” by Yasmina Reza, with a climax of vitriolic jokes that culminate into real physical fights. The effect is of a disruptive comedy, mainly due to the skill of the performers. Everyone has a different acting style, but all are perfectly fell into their character, equipping it with those facets that make human and believable, never running out in the manner speck.
Particularly effective and functional to the narrative is the spectacular choice. The scene is divided into two parts: the bourgeois living room where dinner is eaten and the outside of the apartment. The division becomes almost symbolic in the course of the play, as in the parlor each character wears his social mask that marks convictions and conventions, while outside each of the protagonists reveals the true side and human confessing doubts, weaknesses and fears. The music composed by the notes of the famous ” I can’t take my eyes off of you” sung by Gloria Gaynor , albeit ancillary element , serves as an ironic counterpoint to the story with its disruptive hymn.
Eventually the Love, who is the great absent at the scene where two couples burst and the four protagonists do nothing but insult and injury, returns in the final consolation through the voice-over of the two teenage children, who instead love each other and that, paradoxically, have learned, despite everything , the value of their own feelings from their imperfect parents rather have lost the sens , too busy to be screwed on themselves and not to look more who is in front of them , and particularly the nearest and dearest. In short, love improves lives , yes, but only if you are willing to look for it and recognize it beyond obtuse prejudices.

WHERE WE SEEN:
SALA UMBERTO THEATRE
VIA MERCEDE , 50 , ROME