The Carnival in Italy is an event full of tradition and history, which has its historical roots in the Greek Dionysia festivities or in the Roman Saturnalia.

The Italian Carnival goes from Fat Thursday to Shrove Tuesday, followed by Ash Wednesday and then from Lent.

Here are the dates of this year’s 2019 Carnival:

The most famous carnival parties in Italy.

Together with that of Viareggio it is the most famous in Italy and among the most famous festivals in the world. A world-famous folklore event with very ancient origins. The extraordinary city of Venice, called La Serenissima, in these days is filled with hundreds of public and private events with masked parades and period costumes.

History of the Venice Carnival
As early as 1094, the Venice carnival was mentioned in a document by Doge Vitale Falier. In 1296 the Senate of the Republic prescribed that “the night of Lent”, the “fat tuesday”, would be condoned as a day of celebration. For the period that usually left from December 26th until the Lent, the Venetians used to party in the streets of the city wearing colorful masks and costumes. The mask was a sort of “pass”, and in fact the only “being masked” allowed all Venetian citizens, regardless of their social status, to participate in the party.
Carnival has always been an important event for the citizens, it had a moment of stasis only after the fall of the Republic of Venice because it was not understood and disliked during the French occupation and later under the Austrian one.
The ancient tradition was preserved in the islands, Burano, Murano, where it continued to celebrate. Resources in all its glory in the city of Venice only in 1979 and today is considered one of the most famous and famous carnival festivals in the world.

Main events of the Venice carnival:
La Festa delle Marie, a procession that recalls the tradition according to which the Doge used to pay homage to 12 beautiful maidens of Venice of humble origins;
The Svolo del Leon, an event that concludes the feast of the Grasso Tuesday, with the tribute to the winged lion of San Marco, symbol of Venice.
Il Volo dell’Angelo from the Campanile di San Marco
Il Volo dell’Asino from the Tower of Mestre;

For all information and the program of the Venice Carnival 2019 you can visit the official website of the festival: www.carnevale.venezia.it

This carnival festival is one of the most famous parades of allegorical floats in Italy. Someone claims it is the Italian equivalent of the Macy parade in New York. The Carnival of Viareggio since 1873 is the most spectacular Italian carnival party.

An all-female Carnival of 2019. The entire event is dedicated to the celebration of women: guests from the world of art, entertainment, entrepreneurship and volunteering, will bring messages in favor of the female world.

From Saturday 9 February to Tuesday 5 March 2019 the city transforms into the Italian fun factory, including parades of papier-mâché giants, night parties, fireworks, veglions, theater festivals, gastronomic events and major world sporting events. An international event that every year attracted the public to admire the biggest and most famous allegorical floats in the world.

Main events of the Viareggio carnival:
Three cannon shots, fired from the sea, are the historic unmistakable sign that the party begins in Viareggio and gives way to the parade of carts: Gigantic masked floats come to life among movements, music and dance.
Five Great Masked Courses, concentrated in a single month of great celebrations, scheduled for Saturday 9, Sunday 17, Saturday 23 February, Sunday 3, Tuesday 5 March 2019.

For all information and the program of the Viareggio Carnival 2019 you can visit the official website of the festival: viareggio.ilcarnevale.com

In Ivrea is held the oldest historical carnival in Italy whose rituals are of medieval origin, such as the Zappata and the embrace of the Scarlas conducted by Abbà until the end of the 18th century, were handed down orally until 1808, the year in which the first transcription of a ceremony in The Books of Verbal Processes to future memory appears.

In addition to the parade, with the beautiful costumes inspired by the local tradition of the nineteenth century, the most spectacular event is the historic Battle of the Oranges, which takes place between the people parade on the floats and the public. Everyone can throw oranges to the people on the chariots, which in fact represent the army of the feudal lord.
The spectacular Battle of oranges takes place for three days in all the main squares of the city of Ivrea up to culminate in the historical parade.

The protagonist of the carnival is Vezzosa Mugnaia, a beautiful lady who is chosen each year among the towns of Ivrea, which is a symbol of freedom and is the heroine of the party since its appearance in 1858.

For all information and the program of the Ivrea Carnival 2019 you can visit the official website of the festival:  www.storicocarnevaleivrea.it

Carnival of Ronciglione, Lazio
(from February 17th to March 5th 2019)

The Carnival of Ronciglione is among the oldest in central Italy and considered one of the most beautiful carnivals in Lazio.
Ronciglione, a small town in Tuscia, is enriched with events, parades and ancient traditions. It starts with the Cavalcade of the Hussars, which evoke the defense by these knights of the Papal State; continue with the “Corse dei Barberi”, also known as “Corse a vuoto”, a horse race without a jockey in which the horses gallop through the streets of Ronciglione alone.
Finally the “Pilatata dei Nasi Rossi” stands out. The Red Noses are masks that represent the devotees to Bacchus, god of wine, desecrating figures that, in the pilatata, praise songs in favor of wine, table and senseless life. And to engage the public, they offer steaming macaroni … in a chamber pot!

Main events:
The Cavalcade of the Hussars
The barberi races
The pilatata

For all information and the program of the carnival of Ronciglione 2019 you can visit the official website of the festival:www.carnevaledironciglione.org

Historic carnival in Sicily, one of the oldest in the island, famous for its parade of allegorical floats, surprising in terms of number, manufacture and size. On Thursdays the carnival begins with the delivery of the keys to the Carnival King who is represented by Peppe Nappa. The festivities and the wagons take place from Saturday to Shrove Tuesday, the carnival closes, the Peppe Nappa mask, which parades through the city distributing sausage and wine, is burned in the square.

For all the information and the program of the Sciacca carnival 2019 you can visit the official website of the festival:www.sciaccarnevale.it

In Valle d’Aosta, in the San Bernardo Valley, the municipalities celebrate the Carnival of the Coumba Freida, literally “of the cold valley”, where the passage of the soldiers following Napoleon is recalled through the Gran San Bernardo Pass, in May 1800 , during the Italian campaign.
The masks are the “Landzette”, costumes that are the allegorical transposition of the uniforms of French soldiers. They also hold a horsehair and a bell in their belts. We also find the bear which represents the succession of spring; the tails of the mules, which represent the winds and serve to remove the nefarious drafts; the mirrors on costumes, which must drive away evil spirits; the red color, which symbolizes strength and vigor and which, too, has the power to exorcise malefics and misfortunes. During the parade, people in masks dance and enter houses and visit families, eat and drink what is offered to them.

Historical carnival of the Emilia Romagna region, of the Carnival of Cento we have news since 1600 thanks to some frescoes by the famous centennial painter Gian Francesco Barbieri, known as “Guercino”. In 1615 Guercino depicted parties and demonstrations in his frescoes.
The Carnival of the Cento is twinned with the Rio de Janeiro Carnival, the most famous in the world, and is characterized by the large allegorical floats that exceed 20 meters in height:
Important is the tradition of the revenue that comes from the launch of objects and gadgets, such as balloons and stuffed animals.

Mask: Tasi, a centennial character from the 19th century, a lover of good wine
Main events:
Parade and the procession of the wagons with the “revenue
“Rogo di Tasi”, opens the shows dressed in tailcoats and accompanied by the fox, is burned on the last day

For the information and the program of the Carnival of Cento 2019 you can visit the official website of the festival: www.carnevalecento.com

The Italian Carnival goes from Fat Thursday to Fat Tuesday, the Ambrosian Carnival, instead, postpones for a week and continues until Saturday fat and ends there. This is because on one occasion, just at the time of Sant’Ambrogio, before beginning the Lenten rituals we wanted to wait for the bishop of Milan who was returning from a pilgrimage. The Ambrosiano Carnival is typical of the Milan area. Also called Carnevale di Sant’Ambrogio, the patron saint of Milan, begins when all carnivals end. 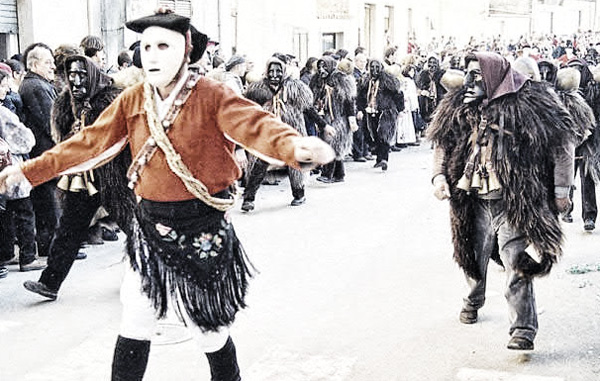 The carnival of mamoiada is a festival in full Sardinian style, with the characteristic masks of the Issohadores and the Mamuthones. The Issohadores wear red bodices, white masks, caps and a small shawl, and escort the Mamuthones wearing sheepskins, wooden masks and carry the “sa carriga” on their backs, heavy with about 30 kilogram bells.