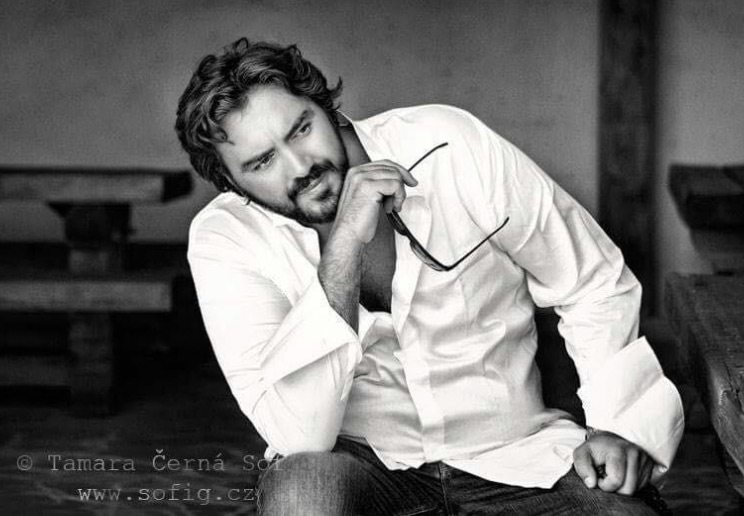 Born in Rome he is an Italian American of origin, mother of Boston, Gianluca Sciarpelletti is the tenor considered the new Pavarotti.
How did your passion for opera begin?
My musician’s professional journey  began before graduating and while still studying at the conservatory of Santa Cecilia in Rome, after winning an international award with my debut in “Un  Ballo in Maschera” by G. Verdi , impersonating the difficult and challenging character of Riccardo. From that moment on, my life was completely changed and my career took off, completely immersed in music, both in Italy and around the world, performing into some of the most prestigious theaters as the Royal Albert Hall in London, Lincoln Center Met Opera in NewYork, Opera City House in Tokyo just to name a few, but always carrying my Italy at heart, where I have the honor of performing this coming July 29th, the role of Turiddu in “Cavalleria  Rusticana”, in the mesmerizing and breathtaking  setting of the Taormina Ancient Theater and later at the Teatro di Verdura in Palermo on August 7th.
As an Italian artist best known abroad than at home, what is your relationship with Italy?
My profession takes me all over the world but I always carry Italy within my soul, proud to uphold the great musical traditions, operatic repertoire and Italian “Bel Canto”, a cultural heritage that we have gifted the world with.
Because of this, it’s been a few years that I have started dedicating time to teaching as well, with the aim of passing on to the next generations and to international students, these core fundamental traditions and artistic patrimony, ranging from mere vocal techniques to the execution of the operatic repertoire  and to the characteristics of the “Bel Canto”, stressing the importance of each individual word and different accents of the Italian language. Texts and libretti that so well have been written by our greatest authors as G.Verdi, G.Puccini, V. Bellini, G. Donizetti, P.Magni, R.Leoncavallo, F.P.Tosti and many more, who have taken our musical and artistic richness to be universally recognized and appreciated as a world heritage.
A life for music, a life in music, a discipline the aims to perfection and for this never ceases to amaze; to it you must devote your life , because you can and must always be better and do better, professionally and artistically, to be able to be, one day, in the company of those very few that will live forever among the stars of this divine art.
A great satisfaction to have been called “the new Pavarotti” by two great authors like Tenko.Uk and the Losangeles Time

Gianluca Sciarpelletti. The son of an Italian tenor and an American soprano, Gianluca Sciarpelletti grew up in the presence of some of the world’s greatest musicians – listening to and ‘inhaling’ the performances of family friends such as Luigi Ricci, Licia Albanese, Mario Filippeschi, Anita Cerquetti, and great American tenor Richard Tucker, – inspiring his great passion for classical music. It was, however, the renowned conductor Franco Ferrara who first launched Gianluca’s musical education at the age of 6 by teaching him how to play the violin. 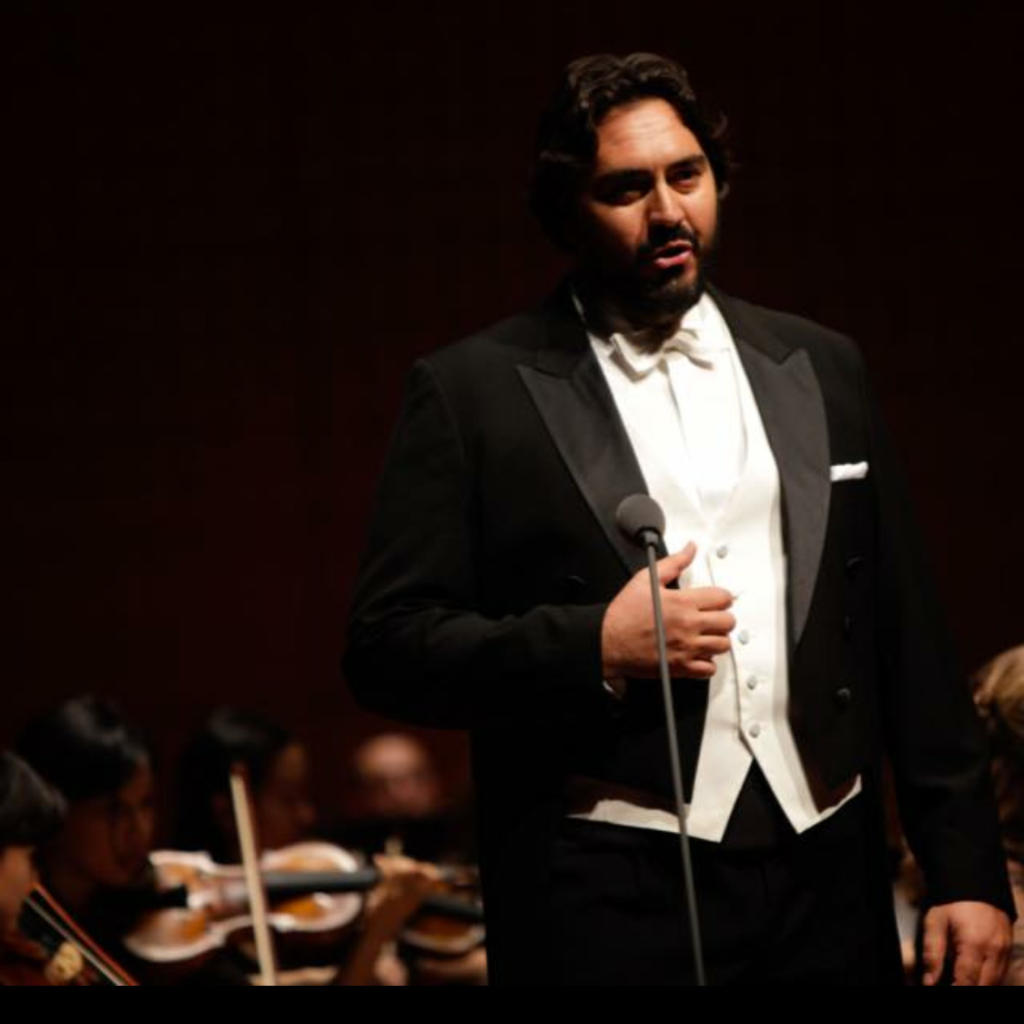 He continued his violin studies at the Conservatory of Music ‘Licinio Refice’ Frosinone, but later switched to Voice, studying first under the tutelage of his parents, and then at the National Conservatory of Santa Cecilia in Rome where he graduated with highest honors, receiving a diploma in Voice, and a “magna cum laude” post graduate degree in Advanced Musical and Artistic Formation (A.F.A.M.) . While at the Conservatory, he participated in the Master Classes of Estonian baritone Mati Palm and famed Italian tenor Giuseppe Sabbatini, as well as studying Theatre Arts with Italian film director, actor and screenwriter, Ugo Gregoretti. He further studied with the legendary lyric tenor Nicola Martinucci, and with artistic director Sergio Segalini at the Osimo Academy. At the invitation of David Holloway, then Chairman of the Voice Department at the Chicago College of Performing Art, Roosevelt University, Gianluca attended the Master Class of the great mezzo- soprano Regina Resnik. “The extraordinary and artistic quality” of his singing so impressed Ms. Resnik and the other professors that they asked him to assist in teaching Voice and Italian operatic repertoire.

An Italian opera critic once wrote of him, “He excels for his powerful stage presence and for his very distinct and classic vocality. Possessing a voice of higher pitch rich in harmony and characterized by a lyric, heroic tone, one is struck by his ability to convey and instill emotions thanks to the richness of color and nuance as he performs the grand repertoire of classical Opera.” Gianluca made his debut as ‘Riccardo’ in Un Ballo In Maschera under the direction of Gabriella Ravazzi, founder and director of “Spazio Musica Academy”. His current repertoire includes already debuted operas like Rigoletto, La Traviata, Il Trovatore, Aida, Madama Butterfly, La Boheme, Tosca, Turandot, Carmen, Andrea Chenier, Cavalleria Rusticana, Pagliacci and Otello. The combination of his stature (at 6’6″) and his beautiful, lyrical voice bring the same compelling force to his classical concert performances, including those of sacred music held in some of the most spectacular basilicas of the world. In Rome, he performed a world premiere composed and directed by Andrea Morricone at the Basilica di Santa Maria Sopra Minerva, and was invited to sing Verdi’s Requiem under the direction of Tomomi Nishimoto at the” Basilica Papale San Paolo fuori le Mura”, in occasion of the “XIII Festival Internazionale di Musica e Arte Sacra Roma e Vaticano” dedicated to Pope Paul VI.

He was also honored to perform the Aida at the opening of the Beijing Music Festival with soprano Hui He and mezzo soprano Ildiko’ Komlosi, under the baton of Yu Long – Artistic Director and Chief Conductor of the China Philharmonic Orchestra, Music Director of the Shanghai Symphony, and founder of the BMF. This was followed by an invitation from the talented and dynamic Lu Jia – Chief Conductor of the NCPA Orchestra and Principal Conductor of the Macao Orchestra, to perform in a concert celebrating the opening of the 2014 Opera Season in Macao, China, and he was the ‘Testimonial Guest Artist’ at the annual BNL TELETHON (supporting scientific research of genetic disease). A generous philanthropist, Gianluca is often invited to charity functions and fundraisers.

Gianluca has participated in recordings of first performances and concerts including “Petite Messe Solemnelle” by Rossini, and “Requiem” by Verdi broadcasted by RAI International TV and unpublished lyrics of the great contemporary compositors Andrea and Ennio Morricone. In addition to his singing career, he is deeply involved in education and he holds the position of vice president of the AME (European Musical Academy), routinely teaching master classes in conservatories around the world.

He holds a Doctorate degree in Political Science from the University of Siena, Italy. Gianluca is of American/Italian dual citizenship.

This is the link to the facebook page of the tenor: https://www.facebook.com/gianlucasciarpelletti/