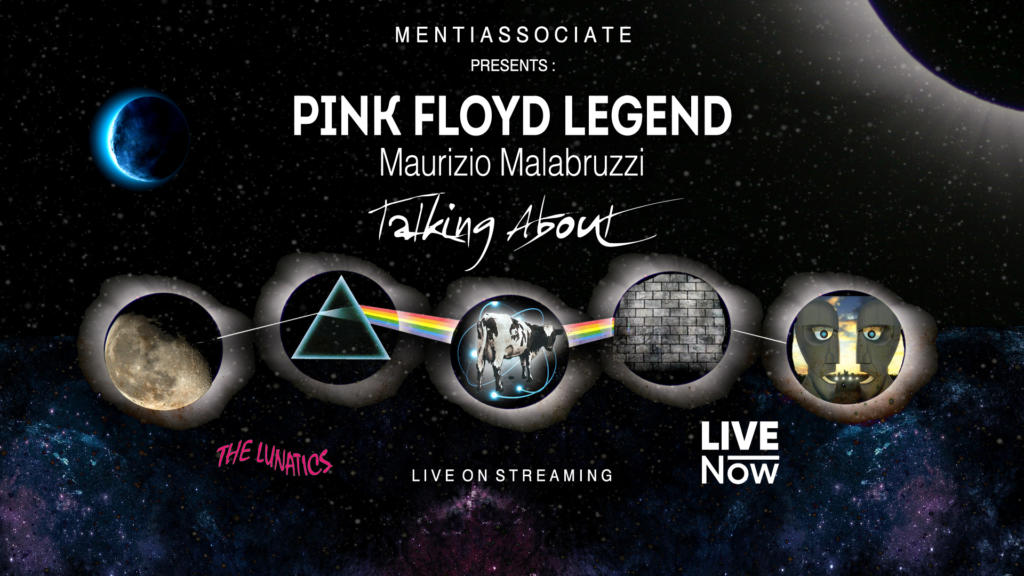 Pink Floyd aficionados, join together! Theatres are still closed but finally, after some months, we have the chance to listen to Pink Floyd Legend in live streaming on the platform LiveNow.

“TALKING ABOUT” AT THE VINILE

Five episodes of the “TALKING ABOUT” format dedicated to the greatest musical successes of the famous English group, played by the Legend and talked together with the Director Maurizio Malabruzzi and The Lunatics, well known as one of the biggest Floyd collectors in the world.

The program at the Vinile in Rome goes through the most important production of the myth of several generations. Every date will be enriched by the presence of a real “special guest”. Here is the right chance for live music lovers to enjoy good music from their own pc or television at home.

The theatre’s closure, which lasts because of the Covid 19 emergency, doesn’t stop Pink Floyd Legend live activities, after shows, in the last three years, in front of 100.000 viewers. They land on LIVENow, the new international platform that supports streaming concerts and sports events all over the world. 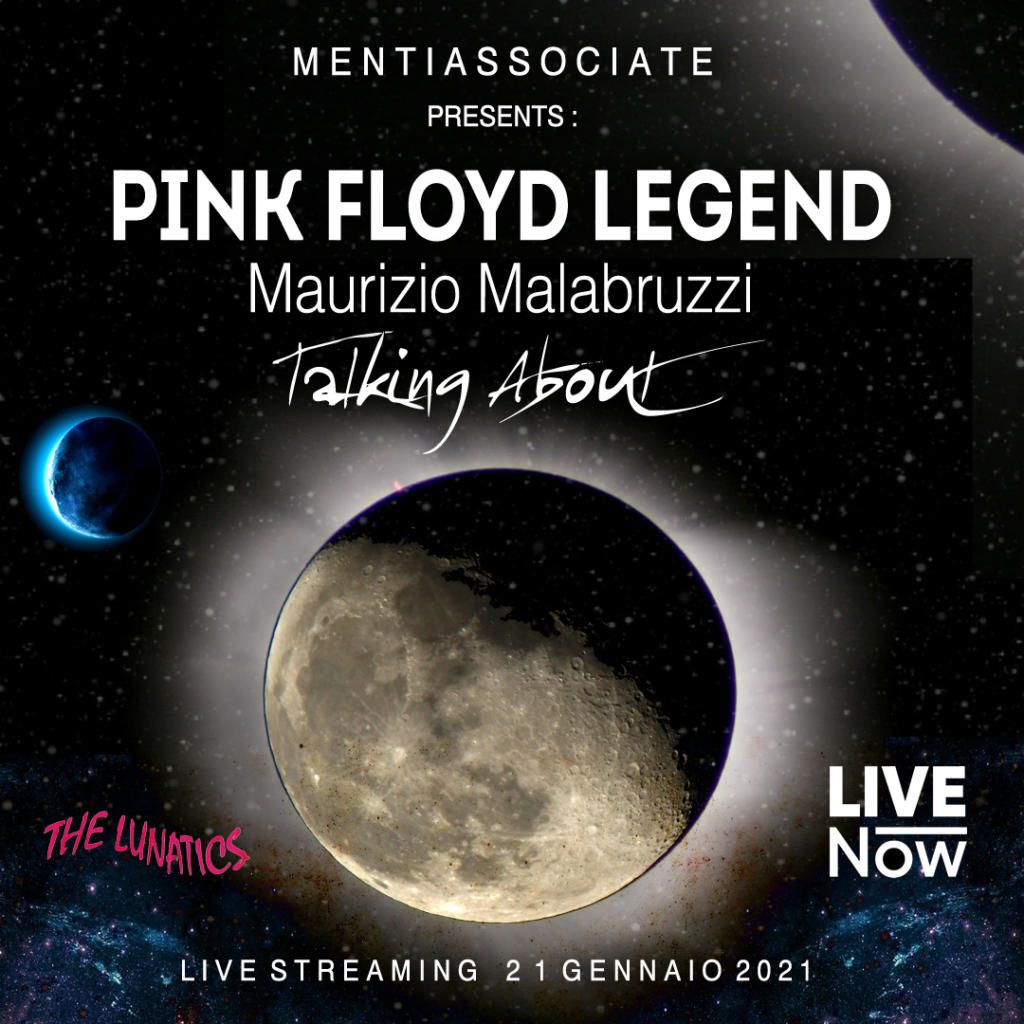 21° January: “Greatest hits”, or all the trucks that made the English band famous. From Shine on you crazy diamond to The Wall pt.2, Great Gig in the Sky a Money, Final cut, Eclipse, Wish you were here, to Comfortably Numb…

28 January: Dark Side of The Moon, considered as the Pink Floyd absolute masterpiece.
THE DARK SIDE OF THE MOON is an album that became a myth due to the number of sold copies, for new sonorities, recording technique, issues, its beauty, and also for the simplicity of the melodies, that fix the beginning of the artistical majority of the band.

11 February: Atom Heart Mother whose orchestral scores were written by the young experimental composer Ron Geesin. Atom develops through extraordinary combinations among classical and rock music, alternating elegant melodies, and powerful symphony: Atom is the maturity disk and the turning point for Pink Floyd who joins the progressive music instead of the psychedelic one.

25 February: The Wall, one of the most appreciated concept album ever. The Wall is a real rock opera based on the abandonment and personal isolation themes. In this album, there is Another Brick In The Wall, one of the most famous songs in the world, at the top of the USA and UK placements. It became a movie later on directed by Alan Parker and animated by Gerald Scarfe with a Bob Geldof wonderful performance, as Pink.

11 March: The Later Years, after Roger Waters, with the greatest successes A Momentary Lapse Of Reason, The Division Bell and The Endless River, with a special tribute to Syd Barrett from the Pink Floyd at The Barbican on 10th of May 2007.

These digital shows, even if not comparable to the live performances with the audience, have some advantages: they are an engaging experience and once you buy the ticket, really within everyone’s reach, you will have 24 hours to see the concert. So, this initiative is a very good solution for the new digital and remote music enjoyment, that we hope will be only temporary. 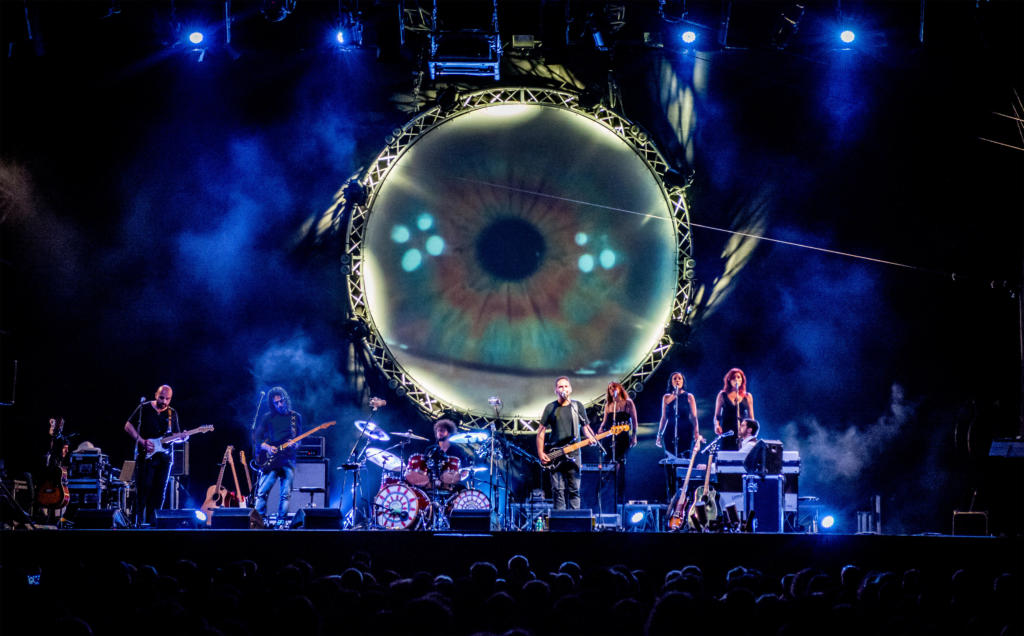 They were born in 2005 and are now considered the most qualified Italian Cover Band tributing the Pink Floyd music, thanks to perfect shows, results of deep studies of the scores, and live concerts they realized in the last years.

Their concerts were all sold out. The 2016 tour was characterized by a concert/event in really special settings like “Live At Pompei” or at Ancient Roman Theatre in Ostia for the first edition of the “Il Mito e il Sogno” festival, also here sold out and with a long final standing ovation. They performed also on the Conciliazione Auditorium stage in Rome and at the LINEARCIAK in Milano.

Noteworthy also the Villa Adele show in Anzio, where they presented for the first time the special project Roger Waters Night, a great tribute to the bassist’s father memory, the British Officer Eric Fletcher Waters, who died in Anzio.

Talking About is a co-production Menti Associate, Giokat, LIVEnow.