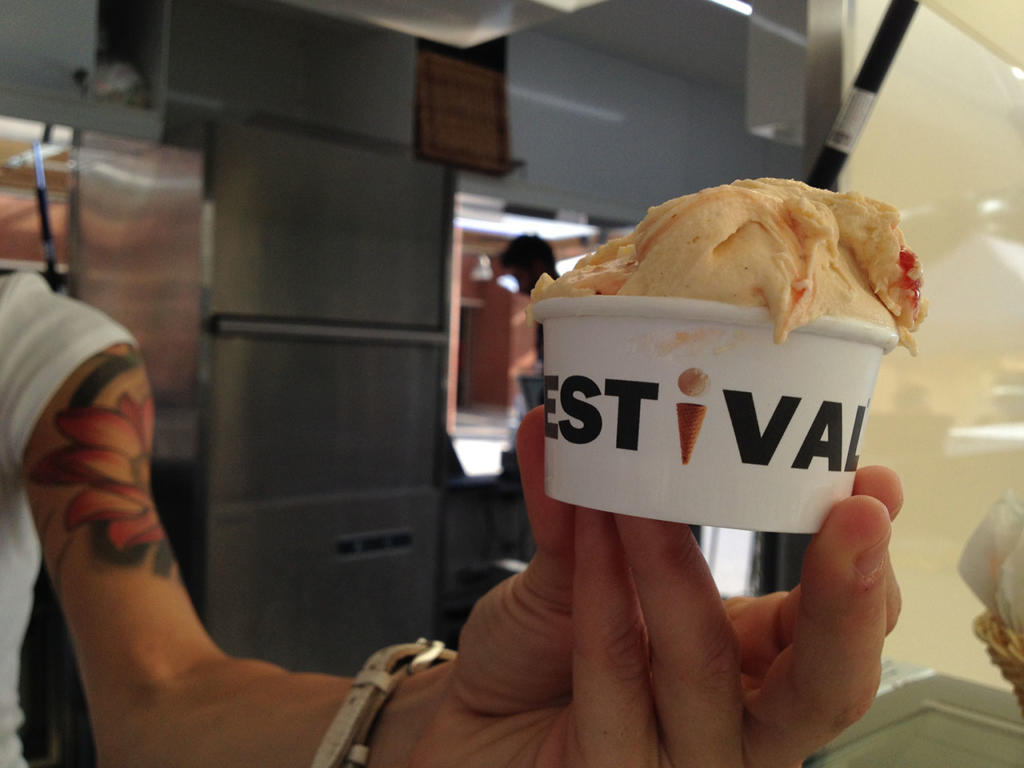 In Rome, the Gelato Festival 2015 will be held this week in front of the auditorium in Rome, in Viale Pietro de Coubertin. Rome Central could not miss, and especially we could not taste the new flavors in competition.

We meet Antonio Mezzalira, festival director, who tells us about his passion for the hight quality italian ice cream. A past as Chef of starred restaurants, 16 years ago Antonio began to experience starting with a gourmet ice until the ice cream art absorbed him so completely that his motto has become: “The kitchen is fantasy, the pastry is precision, Ice Cream is the Perfection! “. Italian ice cream is more often the result of years and years of study and experimentation.

But making ice cream is also an art where the recipes have to be balanced, then we may want to attend various courses, if you want to pursue a career in the ice cream maker by opening an ice cream parlor. “We must not stop at teaching, which is critical,” he says, “but we feel different ice-cream makers and attend various courses or workshops in order to deal with many people and listen to different points of view.”

Antonio states that the ice cream maker is a craftsman who works 15 or 16 hours a day in summer but never rests even in winter. Then do not think the ice cream is a job of convenience, if you engage the result will be the quality

It shows us the mobile facilities of the festival and impresses us the truck–laboratory that allows it to work well  5 “gelatieri” per shift and produce up to 3000 kg of ice cream per day.

Antonio Mezzalira holds the ice cream “Golosi di Natura” (“Greedy of Nature“), in Gazzo Padovano (PD), he won the World Oscar of ice cream at MIG in Longarone (Belluno): probably the most important trade fair in the world. 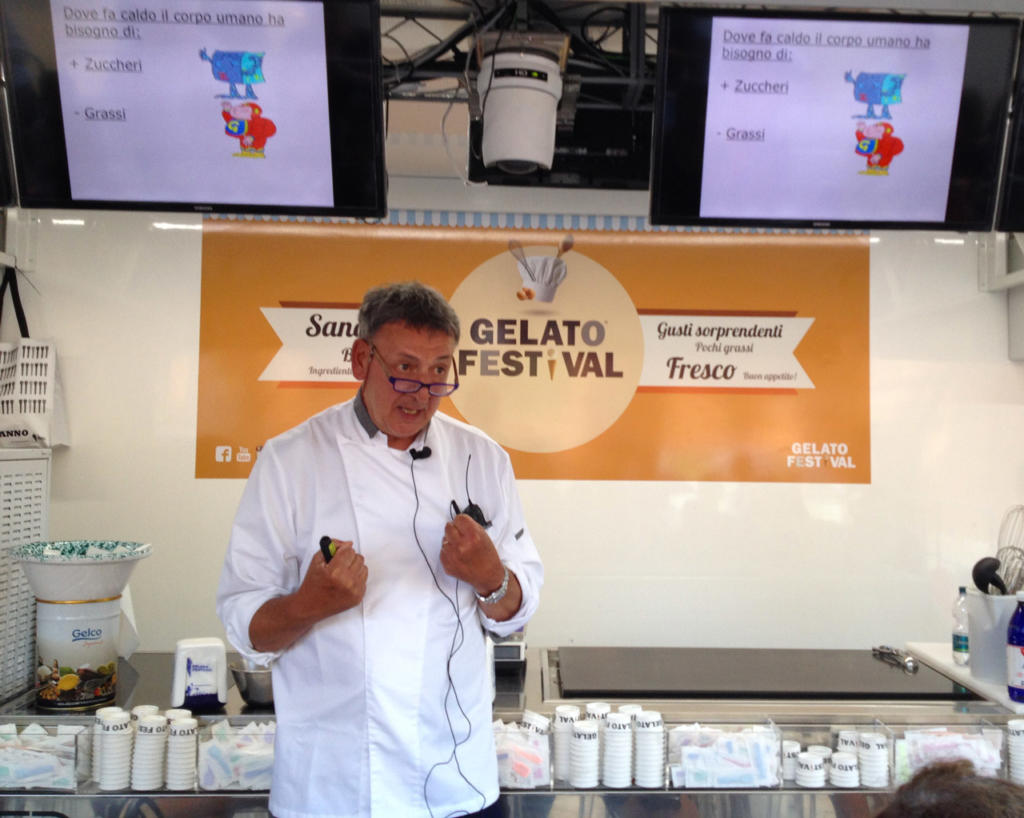 During our tasting we have the chance to attend a lecture by master gelato ice cream Angelo Grasso, we find it in the mobile area set up for the courses and for the presentation of professional ice cream maker “Bravo”, the main sponsor of the event, we see a true keynote address in which “the teacher” teaches the audience to create great ice cream ranging from chemical analysis of the product to tricks to keep an excellent organoleptic result. 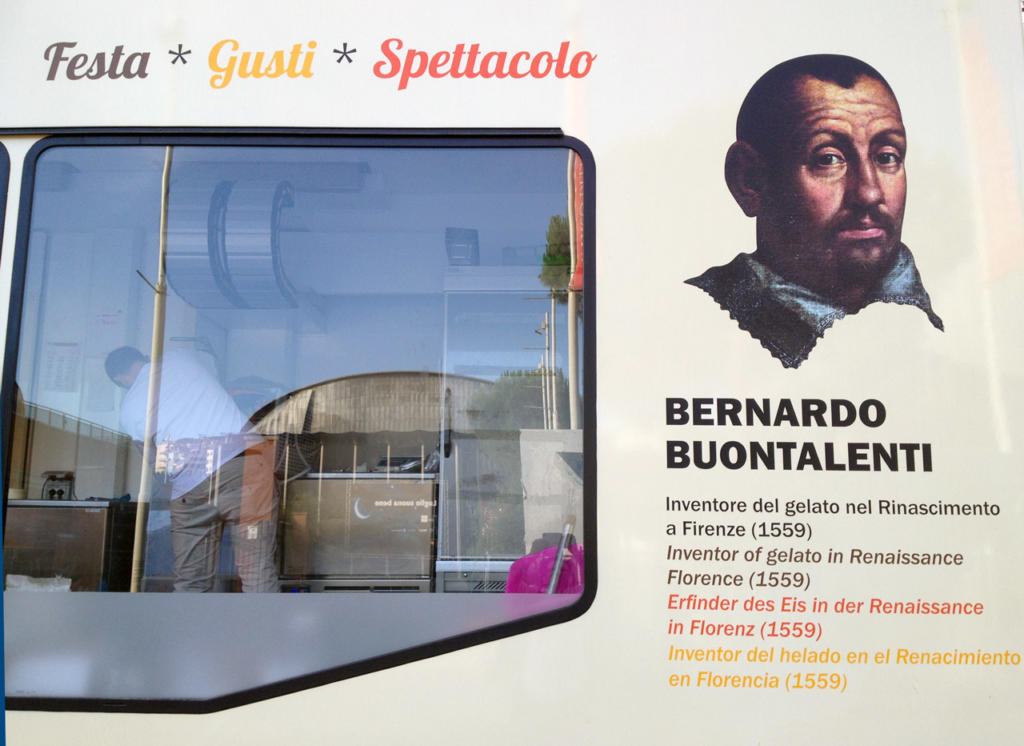 Bernardo Buontalenti (Florence 1531-Florence 1608) invented a sorbet made with ice, salt (to lower the temperature), lemon, sugar, eggs, honey, milk and a drop of wine. Its cold cream was flavored with bergamot and orange and was the precursor of modern Fiorentina cream.

In honor of ‘EXPO (International Exhibition) Gelato Festival is dedicating a taste ad hoc signed by the technical directors of the event  Antonio Mezzalira and Giorgio Zanatta. The taste for Expo incorporates the colors of the brand, is a mango sorbet with variegation of kiwi and strawberry, is based on water for this very lightweight and suitable for those who are intolerant to milk.
The novelty of this stage of Rome is a unique and original taste dedicated to the Jubilee signed by the Director Antonio Mezzalira. The Jubilee is a taste mozzarella French vanilla with strawberry sauce and mint drops Piedmont in honor of Pope Francis, who has strongly backed the next Jubilee. White and red are the typical colors of the papal robes, the French vanilla in honor to the period of the papacy in Avignon and finally Piedmont, which is homeland of Pope Argentine. In Turin, a taste was dedicated to Don Bosco, in the stage of Naples instead had depopulated the taste San Gennaro.

Degustazioni – Tastings – A feast for the palate. A Gelato Festival the creativity of the best ice cream masters explodes in a variety of new and refined tastes, all to discover. The stars are the products of the territory, the most genuine ingredients and classic flavors reinterpreted according to the sensitivity of the individual teachers. From creams to fruit, to the combinations of sweet and salty, the Festival is the largest showcase for the trends in the world of ice cream. For the lactose intolerant provided tastes based on water.

Gara – Competition – In each stage the tastes of ice cream masters will undergo a double examination: a selection of food experts, including journalists and industry professionals on the one hand and on the other the popular vote. They will indeed be the jury and jury to declare in every city the taste winner who will participate in the final in Florence in late summer, which will be crowned the best ice cream maker in Europe in 2015.

La Scuola – The School – At Gelato Festival you will discover the latest trends in ice cream but also you learn to know the characteristics, rules, recipes and ingredients. They will be the most respected chefs and most respected master gelato makers to get in the chair for a program full of curiosity and surprises. In calendar real lessons on how born and brought the ice cream alternating with delicious show cooking offering new fashions to taste the ice cream in the kitchen.

Calendar – The 2015 program will touch the major Italian cities: Naples, Rome, Milan, Turin, as well as Florence which will host not only the opening stage of the event, from April 30 to May 3, but also the final 1 to the European Oct. 4. For the first time Gelato Festival will arrive in Sicily with the stages of Palermo and Catania.

Tour – For the third consecutive year Gelato Festival goes on tour in major Italian cities, thanks to an itinerant structure. They are called Buontalenti, Caterina Ruggeri and the truck at the forefront of technology designed to transform the ice cream in a sight to behold. On Buontalenti gelato makers I am at work throughout the tour for the preparation of ice cream in laboratories at sight. Catherine is located on the School of Ice Cream Festival and the Bottega Ruggeri tastings.

Price – Gelato Festival sells both online and on-site ice cream Card 5 € for all stages of the Tour 2015. The Gelato Card entitles you to 5 cups of ice cream to choose one flavor between tastes in the race and the special and vote taste more popular among those in the race to win a taste to be made between the tastes offered by gelato. With Ice Cream Card you have free access to the courses of the School of Gelato Festival. 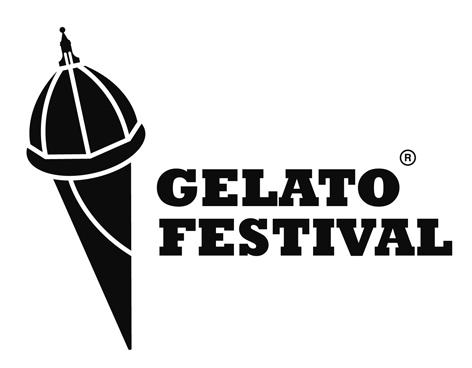 In competition with 8 master gelato makers of the capital. Are the protagonists of the competition 18 to 21 June 2015. A judge the creations of ice cream, besides the public can express their opinions using the Ice Cream Card, a quality jury, made up of journalists and experts will meet to decide the best taste Gelato Festival of Rome in 2015.

Gelato makers and tastes in challenge:

All the stages of the FESTIVAL OF ICE CREAM 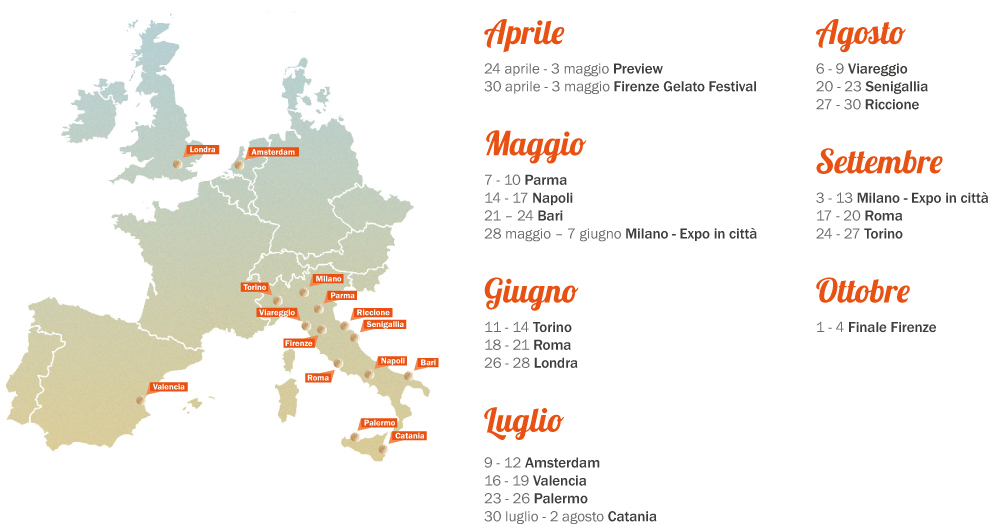 One comment to “Gelato festival, the good italian Ice cream in Rome”