Rome summer 2018, the program of Il Cinema in Piazza has been published, ready to invade the whole city of Rome! 200 free nights of Cinema, with 190 different cinematographic works and 50 meetings, will illuminate the Cervelletta Park in Tor Sapienza, will color the Tourist Port of Rome in Ostia and will open the doors of the Kennedy High School in Trastevere to the rest of the city. 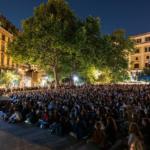 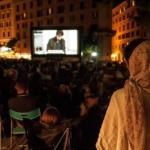 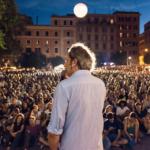 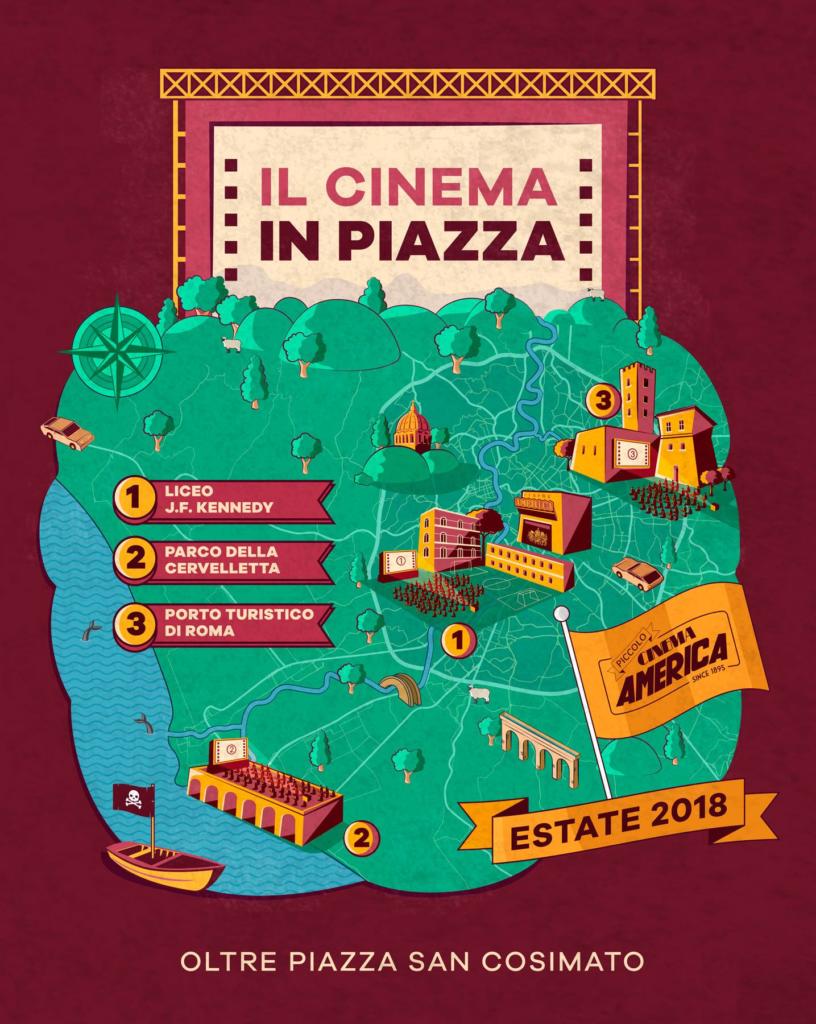 The festival is organized by the Piccolo Cinema America Association, from 1 June to 8 September 2018. Many Italian films and not only for those who will spend the summer in Rome and in the light of the projectors and in Tor Sapienza we will meet directors like  Matteo Garrone along with his complete retrospective, passing by Paola Cortellesi, Milani, PIF, Michele Placido and Asia Silver with his “Scarlet Diva”,.
The Cinema will be free also on the shores of the sea of ​​Rome, in Ostia instead Luca Guadagnino will wait for the presentation of “The Empire of the senses” by Nagisa Ōshima, Carlo Verdone, Claudio Amendola, Riccardo Scamarcio, Claudio Bisio, Luca Zingaretti and many others.

Posted by I ragazzi del Cinema America on Tuesday, 6 June 2017

You can not miss the cinema in Trastevere, the neighborhood where the initiative of free and free u ninema was born for some years, there will be Gigi Proietti with the legendary Italian comedy “Febbre da Cavallo”, Silvio Orlando, Francesco Bruni, Giuliano Montaldo, Roberto He went, Cristina Comencini, Laura Bispuri … and the other dozens of surprises that we let you discover in the program in the images below.

We will be able to attend several retrospectives from the masterpieces of Miyazaki and Almodóvar up to Tarantino, Fellini and Pasolini.
Do not miss the Disney classics that will welcome the little ones and romantics.
Cine-marathon fans will enjoy the marathons from evening till dawn with Spielberg’s “Indiana Jones”, “The Godfather” by Coppola, “Sátántangó” by Béla Tarr and “Gone with the Wind” by Victor Fleming.

THE PROJECT
Summer nights 2018 of Rome. The Piccolo Cinema America Association  has organized for a few years a Cinema Summer festival  in Piazza San Cosimato in the heart of Trastevere district. This year and after a series of ups and downs with the city administration, the Roman summer nights come back to life with light and life with a new project that is extended to other quesrtieri of the city of Rome: “Il Cinema in Piazza” (Cinema in the Square).  After three years of “Festival Trastevere”, the goal is to reconfirm and to improve the model given by San Cosimato, exporting it into three new locations in the city which enter into communication generating synergies, exchanges and new relationships.

“ We started from the outskirts and in the suburbs we will return… The experience of the past few years revealed that cultural and social activities are not only concerning the organisation and planning of an outdoor cinema, but this practice is able to represent and promote the growth, even economic, of all the activities of a neighbourhood.

We want this project to give life to places where citizens can find different ideas of living the city and new cultural expressions. An environment stimulating the debate through which developing new perspectives, where we can discuss and reflect on the future of our City, the role of the cinema theatres, of social, cultural and youth policies, of integration and inclusion, of fighting against crime, of the urban peripheries inside and on the margins of cities. This is our idea of cultural and social participation, that is able to promote reflection on the role of culture itself in the process of educational, training and working growth of young people, based on participatory planning, attentive to the needs of all, on a ” to know by doing ” process, whose fruits grow over time”.
Ass. Piccolo Cinema America

From July 2, 2018 the screen of Cinema America will move from Kennedy High School to illuminate, live and let live again Piazza San Cosimato with 31 nights of consecutive film screenings with free admission.

“We reopened a dialogue with the Deputy Mayor Luca Bergamo – declares Valerio Carocci, president of ‘Piccolo Cinema America’ – claiming our choices and our positions to the end, but also considering it necessary to make ourselves available to Roma Capitale not to abandon work of social relations building started in San Cosimato that have transformed that square into a safe and lively place thanks to the aggregative force of the meetings with the guests of the cinema world and of the projections of the greatest cinematographic masterpieces. We are very satisfied with the table that opened in Campidoglio: the Deputy Mayor accepted the offer we made in February, that is to pay us the occupation of public land (avoiding any contribution, even indirect) and to intervene with seven evenings of consecutive projections, but two in the headphones that, thanks to the collaboration with Radio Rock, will not cause any disturbance for the quiet of the eleven residents who had animated some protest in the wake of the statements of the counselor 5S Gemma Guerrini, never resigned from his role as vice president of the Culture Commission. The “Piccolo Cinema America” ​​won its battle and, hopeful of being able to continue the work for years to come, congratulates the Deputy Mayor for understanding the importance of the project. Now we are available to Roma Capitale and all its Municipalities to work immediately in Summer 2019 even in the most needy areas – concludes Carocci – as done this year, in collaboration with the Lazio Region, the Cervelletta and the Port of Host”….

We thank the principal Lidia Cangemi and all the board of Kennedy institute for hosting us. Now our project is complete: San Cosimato in the city center as a fly to engage the public even in the arenas of the Port of Rome and the Cervelletta Park! And let us claim that, for once, this city has managed to impose itself with cunning and strength by demonstrating that it needs first of all an administration able to understand it, valuing all those realities that, like us, on the exclusive basis of their own forces make our territories welcoming, secular and supportive. The guys from America Cinema

from 1 June to 8 September 2018, free admission – from 2 july the projection will be in the square Piazza San Cosimato

For more information, the web site of the Il Cinema in Piazza project: ilcinemainpiazza.it 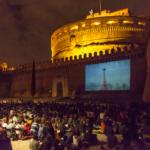 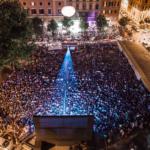 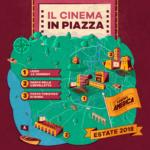 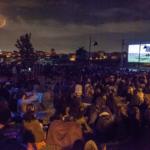 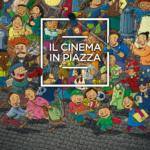 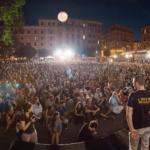 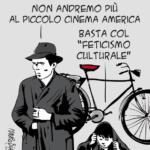 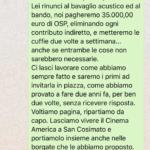 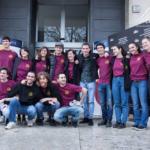 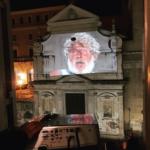 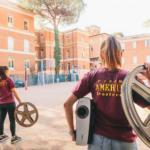 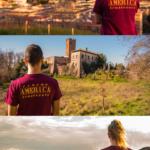 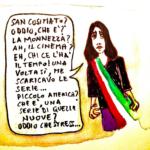 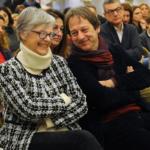 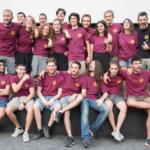 I conclude with a thought:
It’s about guys like those of the Piccolo Cinema America association if the cinema goes out in the streets of Rome and stimulates everyone from the youngest to the oldest … some after watching the movie standing or sitting on the plastic chair taken in loan for the occasion, take the camera in the hand, they realize that their mobile device can also serve to make videos … it is a gift for everyone and strangely it is free in a period when the obsession with money has closed minds and creativity even to the most unsuspected. Jackals are not lacking those who always have one against and that mortify the most sensitive, but the more go on and are still stimulated and awaken from the torpor of social media where sociality is just a bluff, a poker hand and a ride on the carousel … do not stay home scared and with a bitter taste, with suspicion and with nothing full of colored lights, we do not stay and these guys with their cinema and their cultural guerrilla give us the strength to breathe deeply …