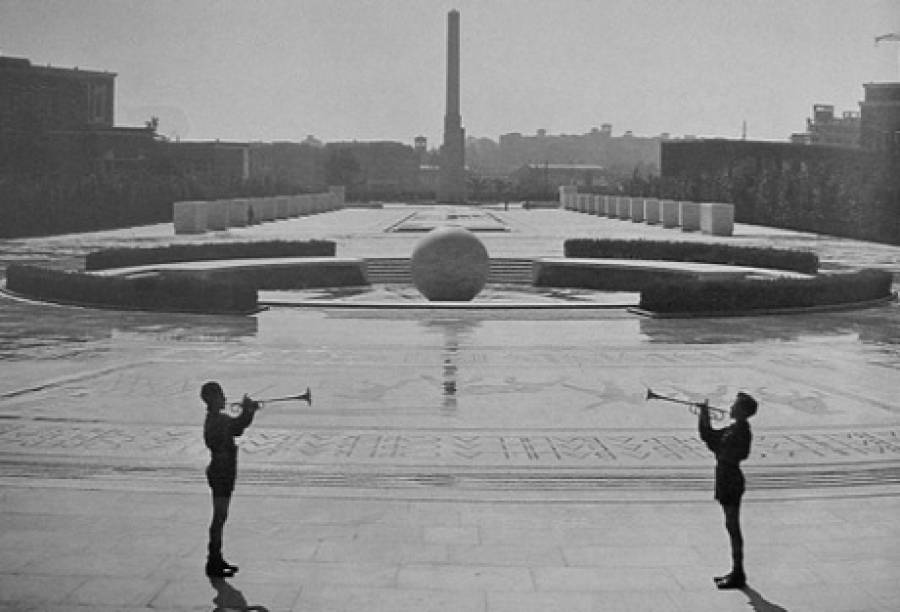 The Foro Italico is a historical area that is often forgotten by the citizens of Rome and the tourists. 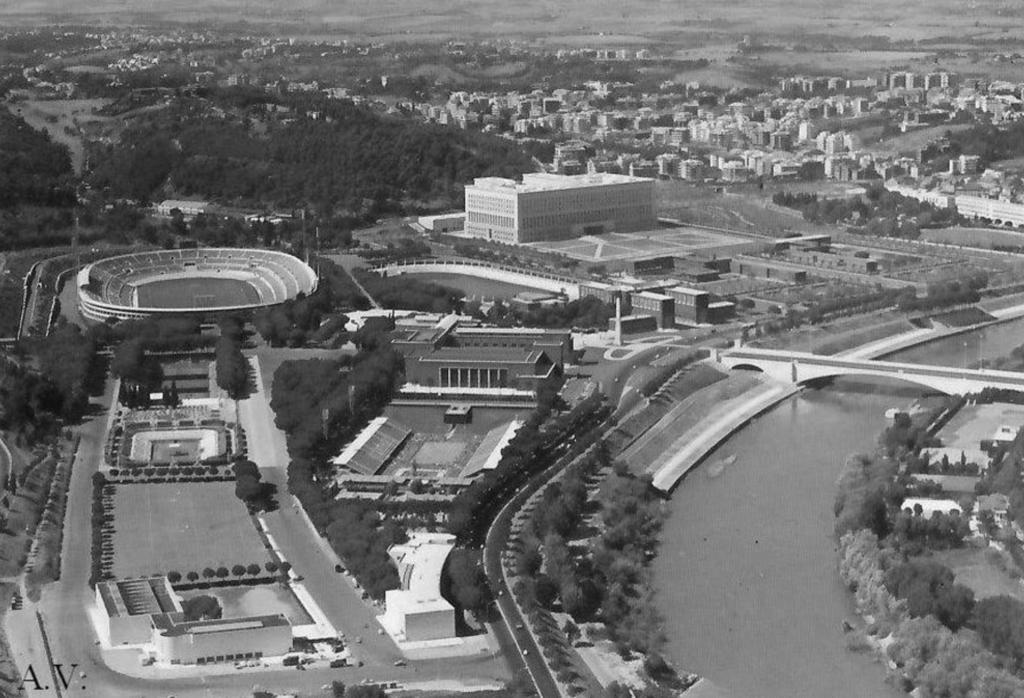 Foro Mussolini, the other name, it was born under fascism of Benito Mussolini.
At that time physical education had a very important role, the sport was considered highly educational. He helped to form a perfect physique and accustomed to obedience and discipline.
The Opera Nazionale Balilla, who was in charge of the education of young people, male and female, from 8 to 18 years, commissioned the architect Enrico Debbio of the construction of this complex.The obelisk offered by the people of Carrara, was extracted in one block of about 19 meters from the quarry where they did write “Mussolini Dux”. For the transport and raising it was needed mastery and special means.
The Empire Avenue was a project architect Luigi Moretti who wanted to commemorate and represent the Fascist Empire. They are represented in the mosaic of empire. The conquest of Ethiopia, the exaltation of sport or physical education. In addition there is the word of the fascism, the beams and the lion images. Hercules and Mars flanked by the start of the avenue. At the end the oath that says << I promise to perform without question the orders of the Duce and to serve with all my might, and if necessary with my blood the cause of the fascist revolution >>. 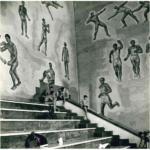 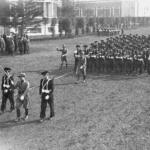 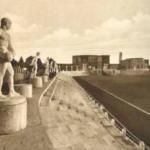 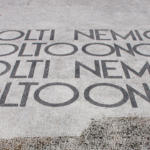 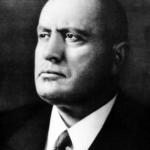 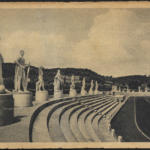 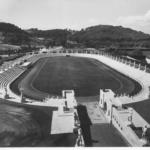 The presence of Mussolini is confirmed by inscriptions that are on large blocks of Empire Piazzale Marble.
Then we find the Fountain of the Sphere, a big white ball resting on a square inserted in a small circular pool. Its shape was meant to represent the universality of the spirit of sport. Around the fountain, mosaics representing marine subjects drawn by the painter Giulio Rosso. 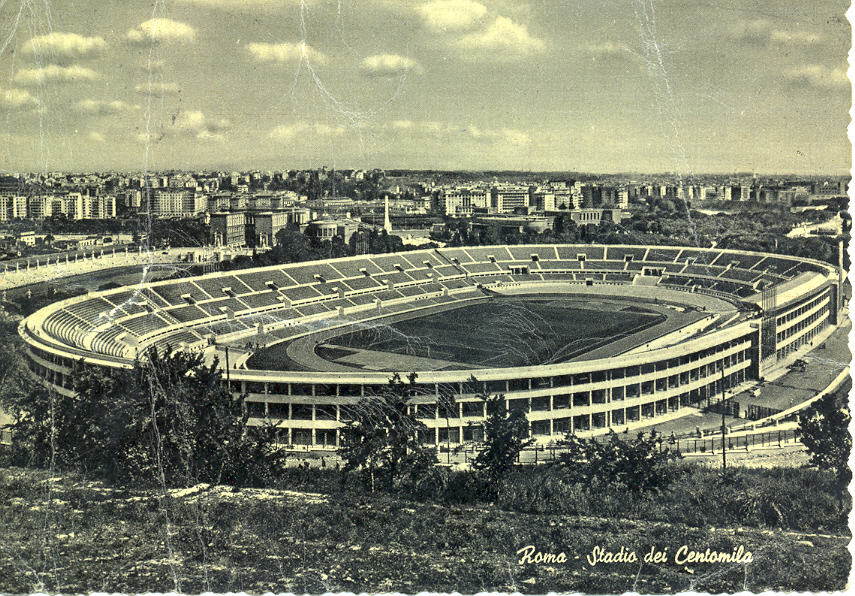 The big Olympic Stadium, originally had the name of Cypress Stadium and did not exactly look like today. It was made entirely of travertine, capable of 50,000 spectators.

The Stadio dei Marmi was inaugurated in 1932 to celebrate the tenth anniversary of the March on Rome. Surrounded by sixty statues that recall the Fascist propaganda style, it was given to each one by a different Italian province.
The statues representing the disciplines using male nude bodies of 4 meters each one, showing the best form of their athlete. The Fascist Academy of Physical Education was built in 1928 and was to play a crucial activities, to train physical education teachers and instructors, but the structure also assumed the role of the institute for the training of male leadership of the fascist youth organizations. 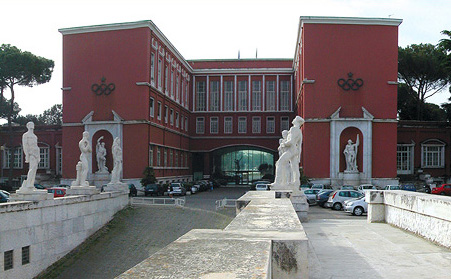 Now home ISEF (Institute of Physical Education)Palazzo delle Terme is the work of architect Costantino Costantini. Inside are mosaics by Giulio Rosso and those on Angelo Canevari walls.On the first floor is the famous Duce gym designed by Moretti. In the entrance area of ​​the gym there is a floor mosaic of white marble, red and black. The marble inlay in the linoleum is a great protagonist. It is currently used as a conference room. 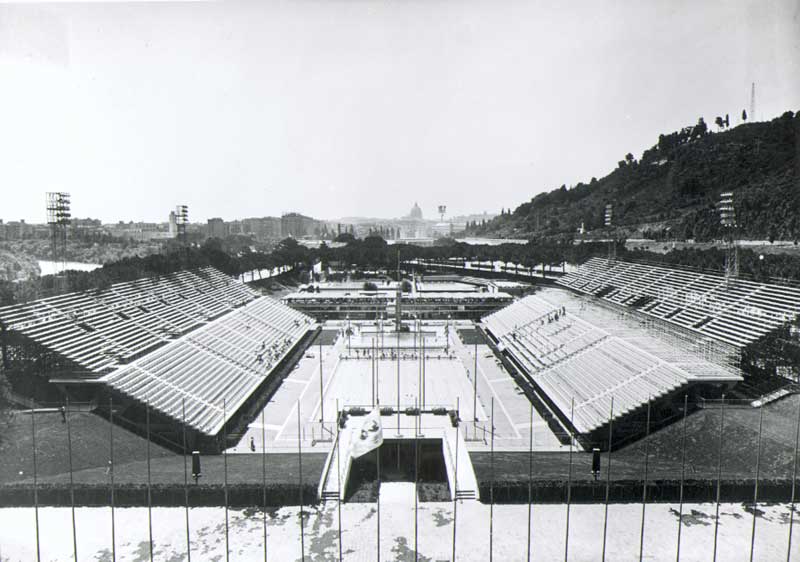 The Olympic Stadium of swimming was a project after the war, in 1956, and is equipped with swimming pools for competitions, for diving, for swimming lessons signed the project architects Enrico Del Debbio and Annibalel Vitellozzi.
To accommodate all the athletes was built the Foresteria del sud, and will maintain its function even in the years after. Now they abandoned and it has any function.
Fascist Academy of fencing, such as Mussolini inaugurated, also called House of Arms. All exterior walls are made of marble from Carrara. There is also one library.

Then there is the middle of the Tennis Stadium, this also like Cypress Stadium was renovated and downsized. Today it’s houses the International BNL d’Italy. 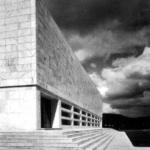 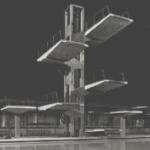 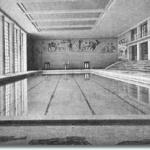 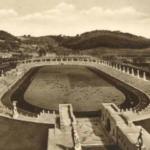 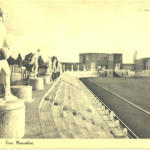 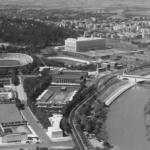 The complex of the Foro Italico is an open air museum and you can visit it every day at all hours, is located at the base of the picturesque hill of Monte Mario.Visit a place of this historical significance makes us a little reviving an important period for Rome, the architecture hardness of this area brings us back to the life that was lived in those years.
—

Benito Mussolini. When he was a young man engaged in the Socialist Party. Later he founded his own newspaper “The People of Italy”in favor for Italian intervention in the war and it was for this reason that he was expelled from the Socialist Party.Disappointed by the liberal politics, industry and landowners began to support Mussolini’s fascist squads. Mussolini in 1922 with the threat of the march on Rome gets the task of forming the new government by the King Vittorio Emanuele III. The 1922-1924 period was the legal stage of fascism that ended with the irregular election of 1924 and the murder of Matteotti who denounced the misconduct.The construction of the totalitarian state was built starting from the so-called “fascist laws” that gave full powers to Mussolini.Fascism tried, through control of education of young people, consent. He used the media as a propaganda tool, and also influenced the free time of the families. also he tried to solve the relations between state and church, and in 1929 he signed the Lateran Pacts.After an initial phase liberal, the Fascist state intervenes heavily in economic life by promoting “autarchia” (from greek “enough to themselves”). The state also intervened on banks and industry under the guise of helping the distressed companies bought their shares, remaining still owner of some of these. Impose to work corporatism (where the worker and the employer had to work together), they use this wea just to keep down the cost of labor.Fascist foreign policy was nationalist and colonialist. The first objective was the conquest of Ethiopia, who was poor in natural resources but which gave way to collaboration with Hitler, who had supported this conquest with supplies of weapons and raw materials. In 1936 he signed the pact of friendship “Rome-Berlin Axis”. Italy later joined a German-Japanese pact against international communism. There was the introduction of the racial laws against Jews, and with the Pact of Steel signed in 1939, Mussolini put the fate of Italian people on the hands of Hitler.

She was born in Rome. She comes from the hotel school , where she studied art history with big passion . Once graduated , she worked as a secretary for years in one office, but for her personality was a grey job and without something interesting. So she quit and she moved for one period in Tallinn (Estonia) where she started learning English. Once back in Italy she had a goal, to work in her sector, and after a few months she could find what she wanted, in a farm/agriturism . "I love being surrounded by food and art."

2 comments to “The Foro Italico”