What is really hiding behind the Halloween party?
Perhaps not everyone knows that on Halloween night, Satan’s birthday is for Satanists! Where it is important to make sacrifices of living creatures, not surprisingly on the night of October 31, animal rights around the world, warn about the disappearance of cats, birds, dogs … and many other animals, which are used as a sacrifice to Satan.
On this night, where everyone disguises themselves as monsters, the Devil and the seven who adore him, play at home! Hidden by this pagan cult of Celtic origin, they can operate undisturbed, and in some circumstances even human fetuses of women making a deal with the Devil are sacrificed! 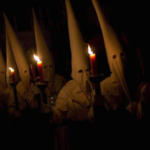 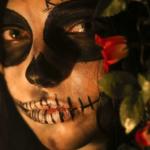 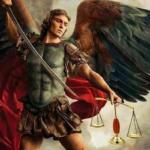 This does not mean that we must renounce celebrating this anniversary with irony and lightheartedness, but we must be very careful and dedicate a simple prayer to St. Michael the Archangel, where to ask for his powerful protection … This is the prayer to be recited to protect yourself during this night:
“This prayer was revealed by the Archangel himself, in 1751, to a Carmelite religious in Portugal, the servant of God, Antonia d’Astonac, a Carmelite religious, St. Michael told her:” I want you to repeat nine times in my honor a Pater and three Ave, in union with each of the nine choirs of the Angels. You will finish these nine greetings with four Pater, of whom the first in my honor, the second in honor of St. Gabriel; the third, of San Raffaele; and the last, of the Guardian Angel “.

O God, come and save me.
O Lord, make haste to help me.

St. Michael the Archangel, defend us in the struggle, to be saved in the extreme judgment

I. To the intercession of St. Michael and of the celestial choir of the Seraphim, make us the Lord worthy of the flame of perfect charity.

II. At the intercession of St. Michael the Archangel and the celestial choir of the Cherubims, may the Lord give us the grace to abandon the life of sin and run into that of Christian perfection.

III.In the intercession of St. Michael the Archangel and of the sacred Chorus of the Thrones, infuse the Lord into our hearts the spirit of true and sincere humility.

IV. In the intercession of St. Michael the Archangel and of the celestial choir of the Dominations, may the Lord give us the grace to dominate our senses and correct the corrupt passions.

V.To the intercession of St. Michael and the heavenly Chorus of the Powers, the Lord deigns to protect our souls from the snares and temptations of the devil.

VI.In the intercession of St. Michael and the Choir of the admirable heavenly Virtues, do not allow the Lord to fall into temptation, but free us from evil.

VII.In the intercession of St. Michael and the celestial choir of the Principalities, God fills our souls with the spirit of true and sincere obedience.

VIII. In the intercession of St. Michael and the celestial choir of the Archangels, the Lord grant us the gift of perseverance in faith and in good works.

IX.In the intercession of St. Michael and the celestial choir of all the Angels, let the Lord deign to allow us to be guarded by them in the present life and then introduced into the glory of heaven.

Pray for us, Archangel Saint Michael, Jesus Christ our Lord.
And we will be made worthy of His promises.

Let’s pray:
Almighty and eternal God, who with the miracle of goodness and mercy, for the salvation of men you have elected the glorious Saint Michael as Prince of your Church, grant us, through his beneficial protection, to be freed from all our spiritual enemies. In the hour of our death we do not bother the old adversary, but let your archangel Michael lead us to the presence of your divine majesty. Amen.

His Holiness Pope Leo XIII (1810-1903), one morning, while celebrating Mass, had the vision of militias of demons who assaulted Rome. He retired to his study, and emerged several hours later. He had written this assignment to Saint Michael:

St. Michael the Archangel,
defend us in the struggle;
be our help against the wickedness and the pitfalls of the devil.
The Iddio commands,
supplications please:
you, who are the Prince of the celestial militia,
with the divine power rin the hell Satan and the other evil spirits turn the world to bring the souls to damnation.Amen.dopodiche ‘the party can’ continue! No drama … but not a lot of superficiality, because as they say: “WITH THE FIRE YOU DO NOT TELL YOU!”