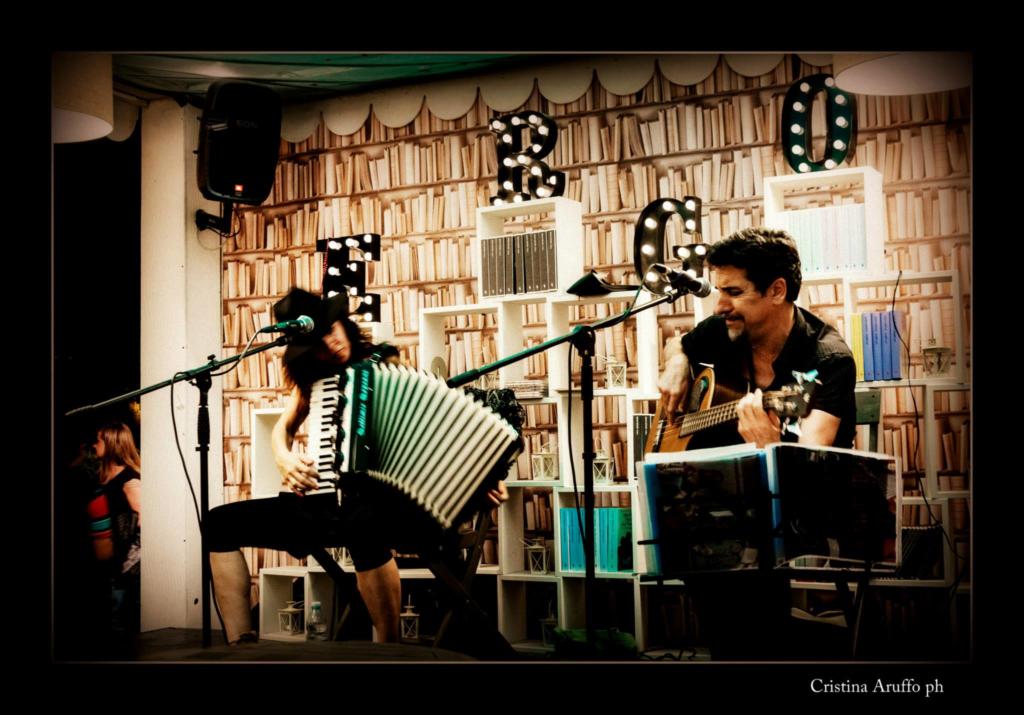 Our meeting with the band Traindeville takes place in their Home Studio, “The Music Room”. Indeed a big room, full of light and musical instruments, in the very center of Rome. Here the two musicians recorded the tracks for their new album Shadows and Lights.

They composed these songs during their last experience in India, during the winter between 2013 and 2014 – a unique mix between Indian suggestions and the whole musical history of Paolo Camerini and Ludovica Valori, both very active artists on the Italian folk-rock scene.

Let’s start from your name: what’s the meaning of Traindeville?

Ludovica: The name of the band, Traindeville, is a word game. It is a heartfelt homage to the film Train de Vie by Radu Mihaileanu – an ironic and beautiful story about an “invented” meeting between gypsies and Jewish villagers escaping together from the horror of Nazi persecutions – moreover, we wanted to create the image of a real “City Train” because our cultural and musical background is definitely that of the big city, constantly growing and developing.

Paolo: A meeting between tradition and modernity that we strive to re-create in our sound. Our instruments – accordion and double bass – are very “traditional”, acoustic, but we really enjoy to mix their sound with drums, sampled strings, electronic loops.

We don’t like being captured in the boundaries of “genre”. Which makes it difficult to say if we are “folk” or “rock” but it really doesn’t matter to us. 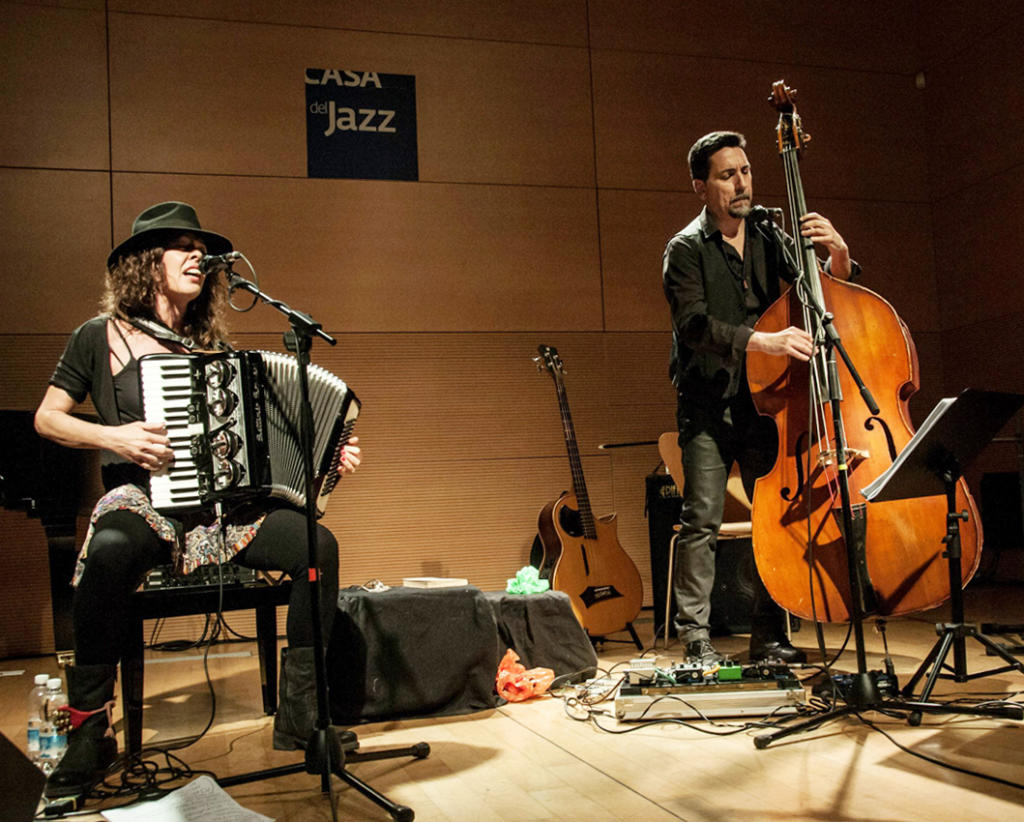 You both live in Rome but you travelled a lot: what is your relationship with this city?

Ludovica: My personal love-hate relationship with Rome is well represented by the song Fatica (Fatigue), the only song in Roman dialect contained in the album!… (laughing)

Joking apart, Rome is by all means a gorgeous city, always taking you by surprise with bursts of sudden beauty in the least expected moments and places.

I’ve been living here in Rione Monti since I was born: I know I’m lucky about that – but I’m not so happy with the changes in this zone. Everything is getting more anonymous than it used to be, mostly because of tourism and business related to it.

I think it’s very important to preserve the identity of Roman quarters – mind you, not only in the Historic Center! – also through a sort of “active rediscovery” of their past and recent history. 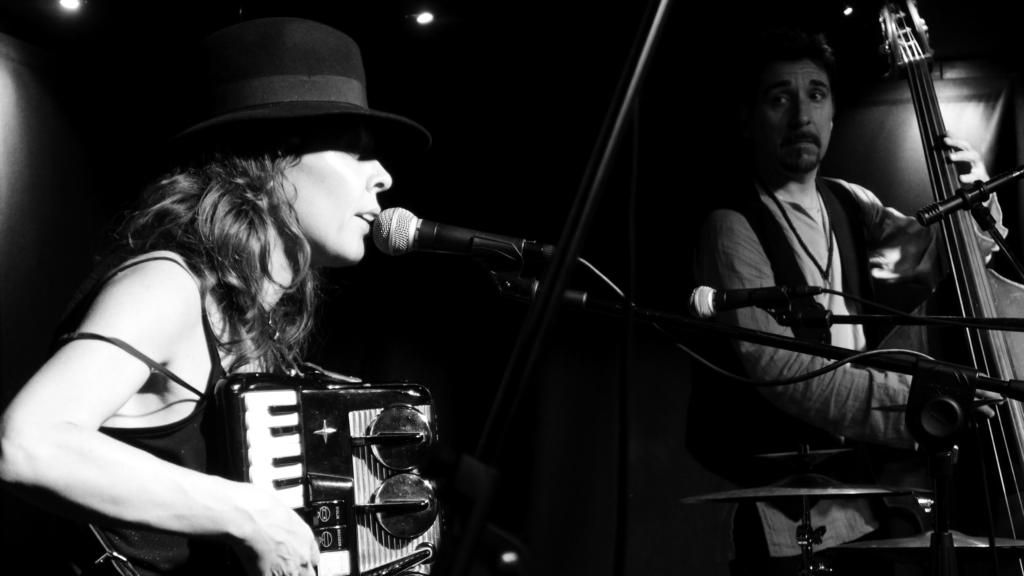 This is also one of the reasons why we have started a very interesting collaboration with Irene Ranaldi, Roman urban sociologist and journalist: she has a great passion for the “creative” exploration of the City and she will be our guest at the Asino che Vola to tell the audience about her Associazione Culturale Ottavo Colle (Eighth Hill), with which she usually organizes walking tours in some of the most interesting venues in Rome. Very often these walks are accompanied by music and poetry, thus offering a unique perspective to the visit of famous places like Monte dei Cocci in Testaccio or the Protestant Cemetery in Piramide, but also suburbs like the Trullo, where we took part to the Festival della Poesia di Strada (Street Poetry Festival) a few weeks ago, with a poetry reading and a guided tour to the Street Art paintings recently appeared in that area. 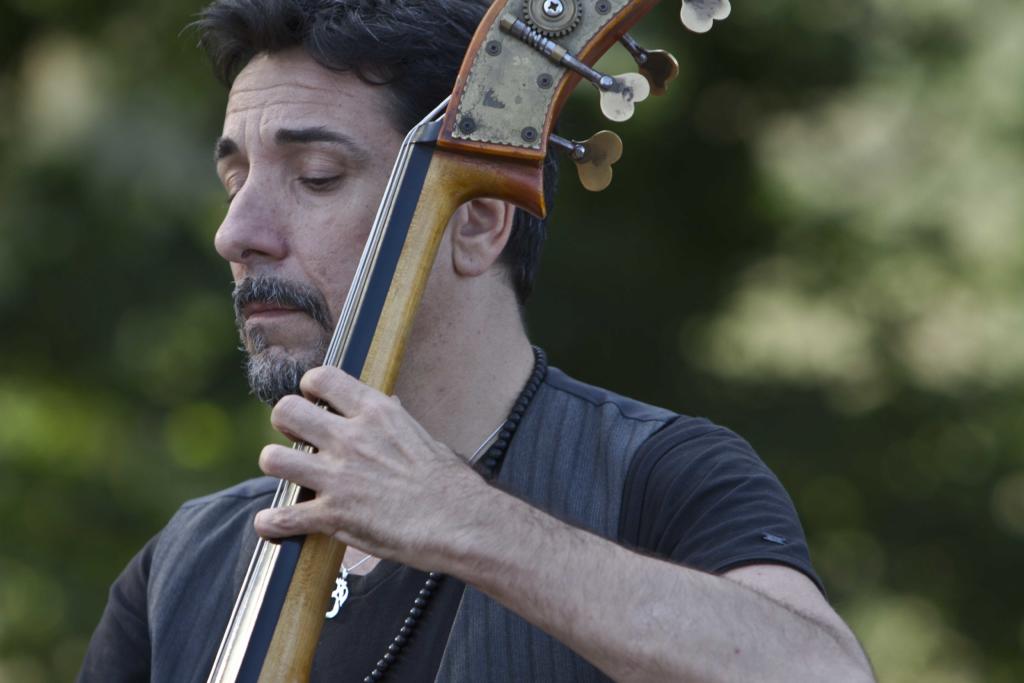 Paolo: I was born in Rome too, but unlike Ludovica I’ve been living in many different parts of the city, also in Pigneto – before it became so “fashionable”! (laughing)

Living in Rome can be very stressful if you have to move constantly through the streets by car: the traffic jams are unbearable sometimes! But I admit that every time I come back after long journeys I realise that despite all her problems Rome is a beautiful and extremely charming city. Maybe we Roman guys should travel a little bit more abroad to be able to appreciate our native city. And to treat her better! 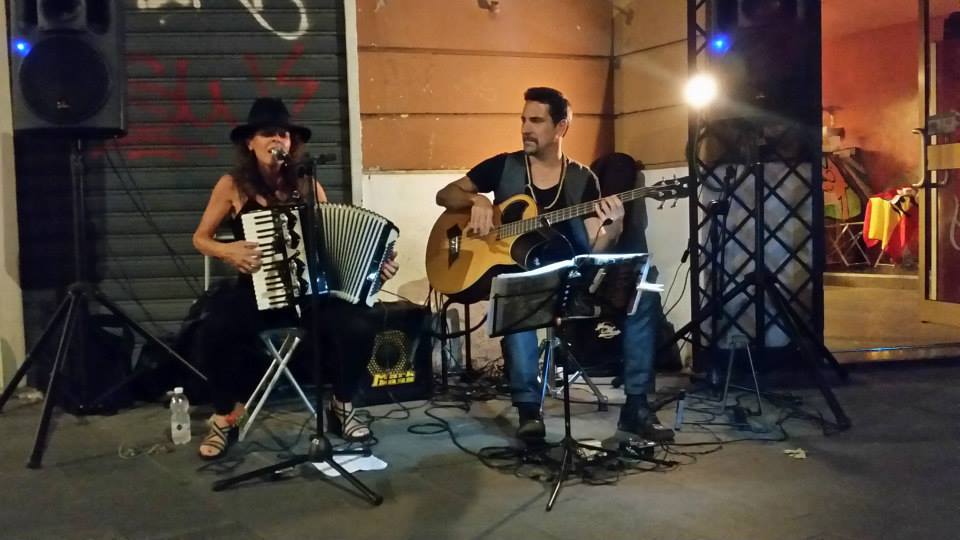 What is it like to be Roman for an artist?

Paolo: I have always played with our dialect and our “romanità” (Romanity, I.e. Roman culture): with my first band, the Cyclone (legendary Psychobilly band, born by the end of the Eighties), we had lots of fun by mixing bits of traditional Roman songs with our own compositions.

After that, with the band Nuove Tribù Zulu, founded by me and my brother Andrea Camerini with the drummer Roberto Berini (both already part of Cyclone), the city was the perfect scenery for our music. We used to go busking in beautiful places like Campo de’ Fiori or Piazza Navona. 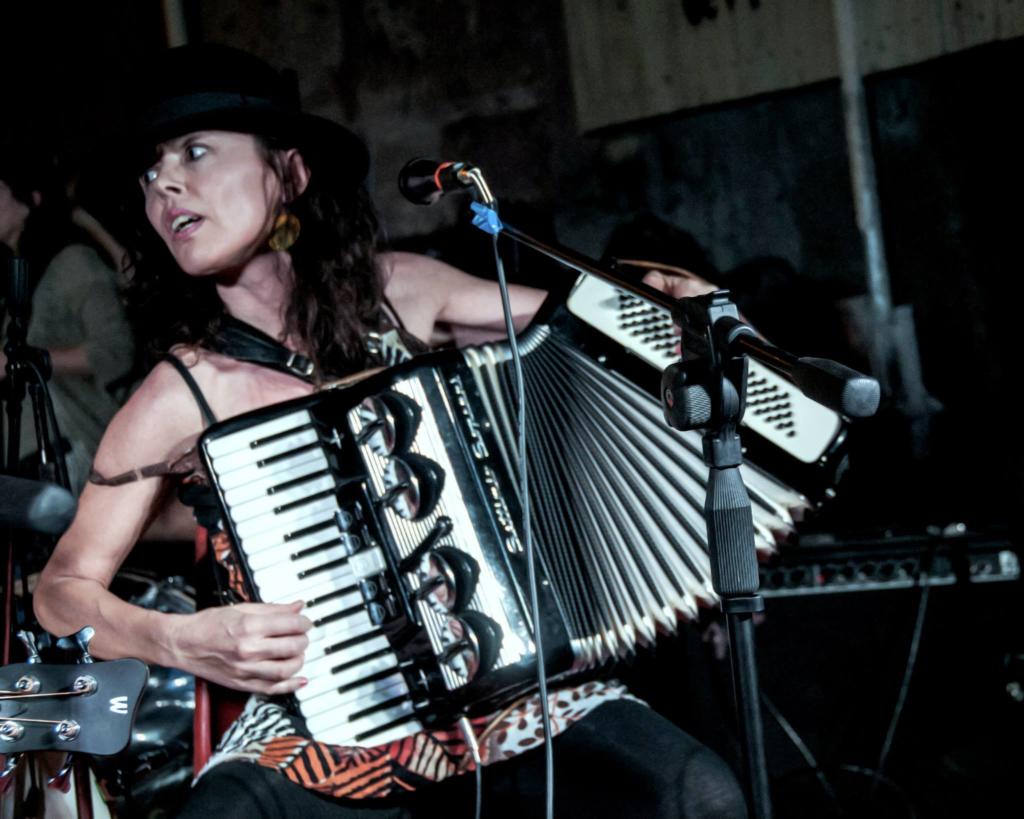 Ludovica: Well, Rome is really the most fascinating place for that – just think about Via dei Fori Imperiali on Sunday mornings: a smashing stage, isn’t it? Sometimes we go and play there, busker style.

This is all very romantic, but the situation for artists is not that easy. There’s plenty of clubs and music venues but I don’t think we can talk about a real “Roman Scene”. It is very important for us to share experiences and suggestions with other artists but this is complicated: the average audience for concerts has certainly changed and this has caused a change also in many promoters and musicians’ mindsets.

No one really wants to venture in new things, to take any risks, and for an artist this is really bad. 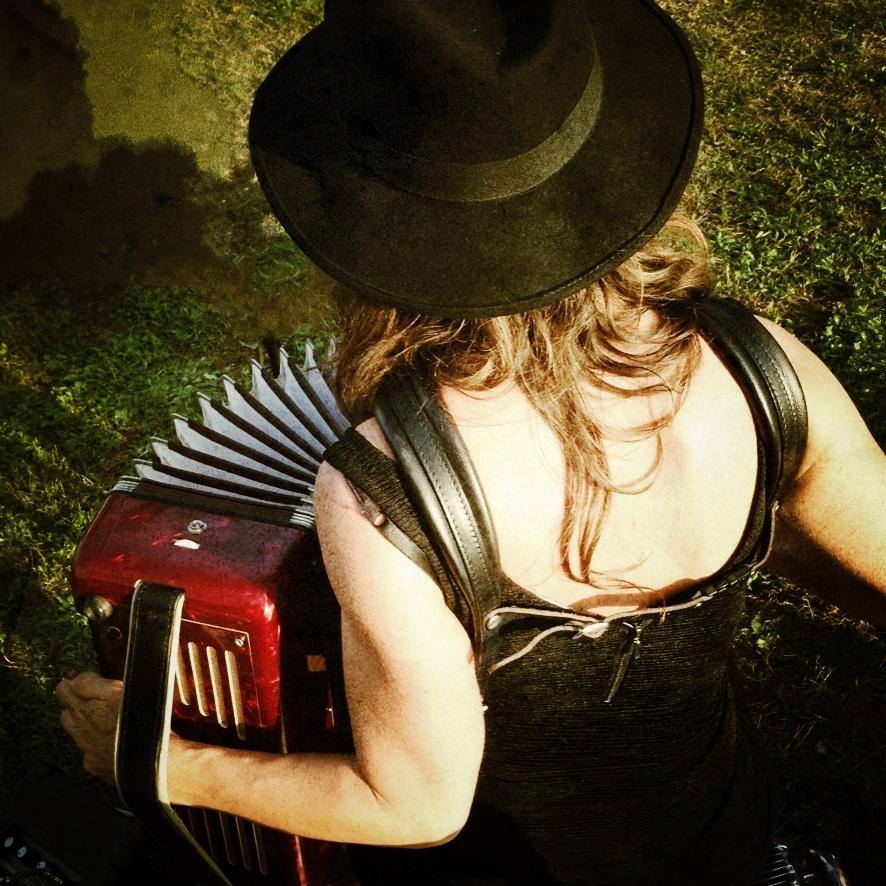 Ludovica, you often write in Roman dialect, why?

I always enjoyed writing in dialect: it has much more rhythm and freshness than Italian language. I started rediscovering traditional Roman songs when I played with Ardecore and BandaJorona, the first bands which brought back some attention on that kind of repertoire. Roman folk songs are not only just “stornelli” (hilarious songs usually improvised by drunk folks at the Osteria). I mean, that’s nice and funny but there’s so much more than that in our tradition. Poetry, melodramatic stories, romantic serenades… and very few people know about that.

Anyway, I started writing my own songs in Roman dialect because I felt the need to tell stories about the modern city, the meeting or different cultures, its contradictions and conflicts. 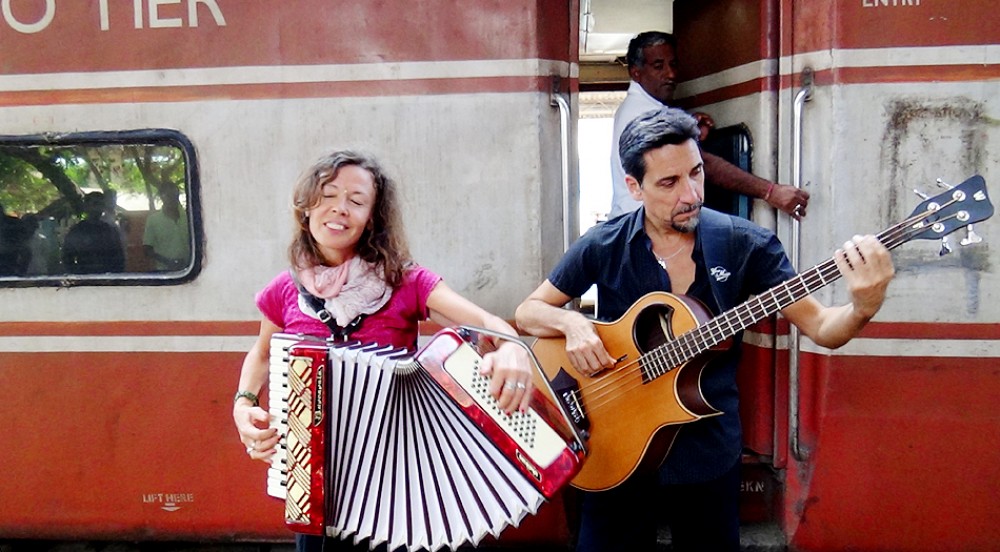 Your cd “Shadows and Lights” is a self-production. You guys, though, come from important experiences such as Cyclone and Nuove Tribù Zulu for Paolo and Ardecore, Nada, BandaJorona for Ludovica: why did you choose to do everything by yourself?

Paolo: in this particular moment, given the situation of the Italian musical industry, it’s quite tough for a band like ours to find the support of a Label or a Producer – professional figures that are anyway becoming more and more difficult to find here.

We are not a mainstream product: we sing in various languages (English, Italian, Spanish but also Yiddish, Romanès, Bosnian…), we use peculiar instruments and talk about particular issues like migrations, multiculturalism and so on. Things have changed a lot, mainly because of economic crisis: we are very aware of it but we want to keep our independence and do our best to produce our music with our own schedules and views. 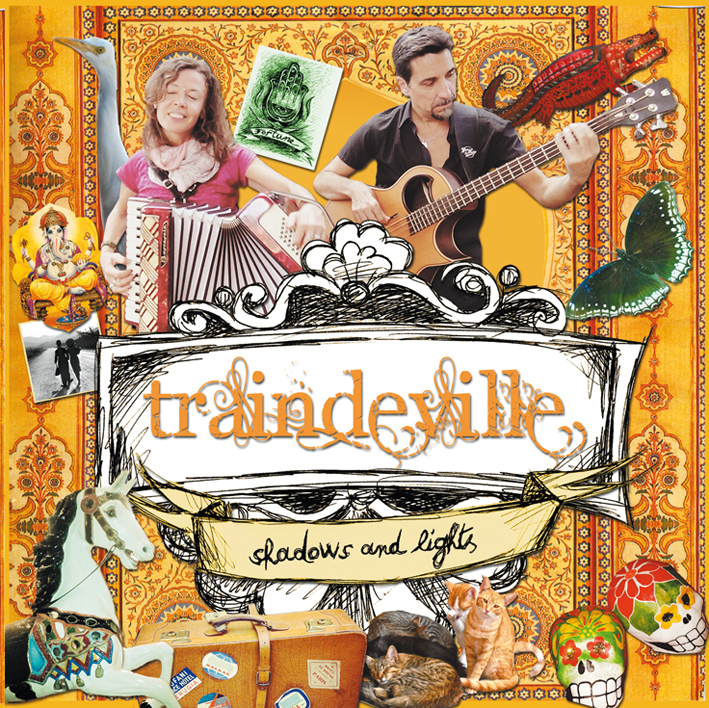 So we put up a little home studio and with the help of many musicians – good friends of ours who share our idea of making music – we recorded the tracks for this album.

Working in our home studio allowed us not to hurry, to have time to make our experiments without worrying about time and money – indeed the worst enemies of creativity! And indeed many other independent artists decide to work that way. Being free is the most important thing.

Why is the 25th november concert so special? Who is going to be on stage with you guys?

Ludovica: First of all, it is a particular day as it’s the International Day for the Elimination of Violence against Women and we’re always on the frontline when it comes to social issues. As for me, I was brought up with bread and feminism!… (laughing)

There’ll be many wonderful musicians on stage with us: Umberto Vitiello on percussions, Adriano Dragotta on violin, Emiliano Maiorani on guitar and ukulele, Roberto Magnasciutti on bouzouki and guitar – but also the webzine Slowcult who took active part in the organization of the gig and then our special guests Irene Ranaldi, the urban sociologist and journalist I mentioned before, and Sonia Ravera, social activist involved in Migrants’ Rights at the Centro Baobab and founder of tsibah.org, a group of fantastic women committed in creating solidarity initiatives for a better future. The merry and colorful brigade of gypsy dancers Zigana Clan, led by Anastasia Francaviglia, will perform on the most Balkan-Gypsy song in the show.

Last but not least, the husky and deeply charming voice of Fabio Magnasciutti, renowned illustrator and singer in the Irish Rock band Her Pillow, with whom I’ve been playing accordion and trombone for many years: Fabio sang with me in “Love Will Tear Us Apart” on our cd, the only cover in the whole album. A celebration of a most loved hit by the Joy Division, revisited in a folk style. Because our roots are in traditional music but also in the rock bands or the Eighties.

We are waiting for you at the Asino che Vola, Via Antonio Coppi 12D (Metro Stop Furio Camillo – P.za Zama) Wednesday 25th November 2015 at 10pm for a colourful evening! www.lasinochevola.com – Free Entry

A lover of art, music and literature – Graduated in DAMS at the University of Roma Tre.