From the comic book by the Italian cartoonist Zerocalcare, the prophecy of the armadillo arrives at the cinema thanks to the director Emanuele Scaringi.

Zero is twenty-seven years old, living Rome in the suburb of Rebibbia, more precisely in the so-called Tiburtina Valley. Mammoth land, acetate suits, reclusive bodies and big hearts. Where everything is missing but nothing is needed. Zero (Simone Liberati) is a draftsman but not having a steady job he arranges giving French repetitions, timing the check-in files at the airport and creating illustrations for independent punk bands.
His life always flows the same, between days spent on public transport crossing half of Rome to reach the various jobs and visits to the Mother. But once he returns home, his critical conscience awaits him: an Armadillo in flesh and blood, or rather in plaques and soft tissues, which with conversations at the limit of the paradoxical constantly updates him on what happens in the world.
To keep him company in his daily adventures, in the constant struggle to keep afloat, is his childhood friend Secco (Pietro Castellitto).
The news of the death of Camille, an old schoolmate and his teenage love never declared, forces him to deal with life and to face, with his desecrating spirit, the lack of communication, doubts and lack of certainties of his generation of “cut off”. 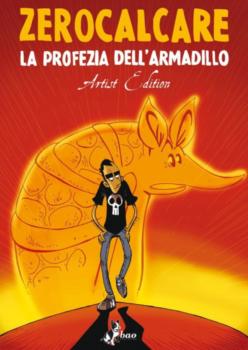 The prophecy of the Armadillo is the first comic book by Italian cartoonist Zerocalcare. The book won the Gran Guinigi award in 2012, in the category “best short story”.

A FANDANGO production with RAI CINEMA

He has been working on the development of Fandango projects since 2001.
He has collaborated as screenwriter for the films “Senza senza pietà” by Michele Alhaique, “Diaz – do not clean up this blood” by Daniele Vicari and “BB e il Cormorano” by Edoardo Gabbriellini. As a production delegate, he followed the films “Dove cadono le ombre” by Valentina Pedicini, “I stop when I want” by Sydney Sibilla, “Tutti contro tutti” by Rolando Ravello and “L’ultimo Terrestre” by Gipi.
He has made several short films and documentaries that have participated in various festivals (including “Il ragno la mosca”, “My kind of woman”, “All human rights”, “Okunchiran”), theatrical performances (“Non Dirlo” by Sandro Veronesi , “Moby Dick” by Baricco, “Chisciotte e gli invincibili” by De Luca) concerts (“Notte della taranta”, “Capossela”, “Homage to Endrigo”), spot, video, booktrailer (“la Collina”, “Final cut “) and numerous making of (” The Consequences of Love “,” Quiet Chaos “).

“The prophecy of the armadillo”, an adaptation of the homonymous graphic novel bestseller by Zerocalcare, is his debut in the feature film.