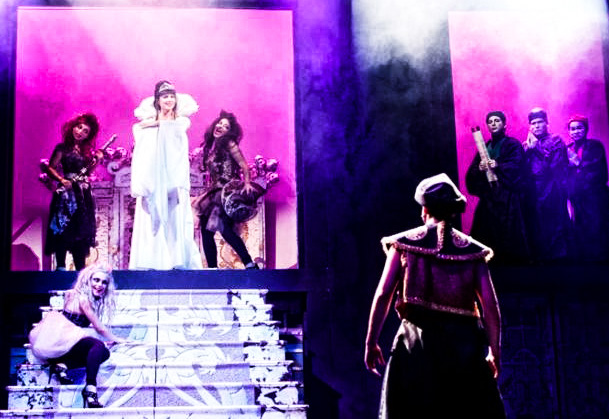 And so does this new star of the Italian musical helmed by director Maurizio Colombo and interpretation of Lorella Cuccarini, our Olympic gold in show business, television and the (big) stage, which always has been able to fill up and to shine with his gentle and acute verve, culture and fast irony. A Vulcan.

Cuccarini is the “Spock”, of our country.
Since the beginning of his career 30 years ago at the age of 20 thanks to the intuition also undeniable talent scout of a great Lord again and always well-liked, Pippo Baudo, he has not missed a shot. Instead, at the same time he developed his innate artistic talent, exploring each time the new, coming to maturity and completeness. A hard worker.
Must necessarily be loved this Italian, who kidnaps, for its great charm, a live magnetic beauty, which far exceeds that which the camera passes, acumen, wit and for a female character of our generation, in Italy, It has no equal.

Cast winning do not change!

Besides, even in Rapunzel musicals, always Brancaccio two seasons ago, the same artistic cast, playing a character, a role, its polar opposite, Cuccarini had given us a sublime interpretation of the character from the evil corvinissimi hair.
E ‘proud, Lorella, and rightly so, to embrace these challenges, making their characters very different from herself, exposing, threatening, raising the bar of his own difficulties.

Turandot de The Ice Queen is inspired by the character of Puccini’s Turandot (the -t pronounce but you know!), Bipolar character, romantic and icy, -e complex not simple to interpretare- of woman who is stripped of the privilege of It is protected, which has abdicated its own archetypes -What havoc for humanity!
And so it holds that ‘bad’ registry in the curse unfortunately, but in itself reveals their good nature, as well as in that of love racking that Calaf, The Unknown Prince heat fire, donates, tramutandone the state of incompleteness.

There may be a story without end?

You can win a riddle evil of fate?

Calaf heat love fire is the male protagonist of this work on its debut, the character played effortlessly scene by Pietro Pignatelli that if the well has to do a duet with Lorella / Turandot -and indeed has dug in over 1,000 candidates casting. This male character stole around to Shakespeare and thrown in the development of a Persian story of the collection of Le 1000 and a Day, a major tear in the solo applause.

Musical with stylistic references to the work of Puccini, the winks but really no arrogance, it is musical, and composing music for musicals, for us Italians, it is difficult, it is challenging, arduous. We are not Americans, here there is Broadway. But this artistic cast of great visual and sound impact, he embraced the challenge, as in Puccini Turandot including modern musical elements -of jazz, from Gershwin, here’s pop, rock and singing melody.
The Ice Queen is Entertainment. Also directed to adult male audience and besides families and especially children. It is a musical comedy, with the homage, the background to the Italian opera culture, bringing them even great respect. A special round of applause to the three composers: David Magnabosco, Alex Procacci and Paul Barillari, each of whom brought their own staffs of classic, soul & blues, and melody, as well as having entered with great skill and always with respect, various Puccini quotes .

The temperature of the performance is high, of very good quality; the casting has found powerful voices, unique, unusual, really valuable notes, diamonds of this musical, sewn into the lapel. Most well-designed and interpreted unforgettable characters are the good Emperor father never really resigned, and the three evil witches rock-hard that not to feel alone in their wickedness and extreme greed affect life even a queen of hearts.
The scenic artifices, set design and special effects are majestic, beautiful, beautiful, elegant set designs. It ‘s all chic and pop at the same time.

Go and see this new fairy tale, in reply after the debut full house of 9 March until 23 March at the Teatro Brancaccio: 21 people, a nice company, a creative group, in turn, skippered by Alessandro Longobardi and its delicate audacity to artistic director and producer.
Backed by Rapunzel (160,000 admissions from the previous season) -which at the time he left open-mouthed themselves before us, with this musical tries again, with great boldness even now decisively supported by a recently implanted Dolby surround ganzissimo to Brancaccio.