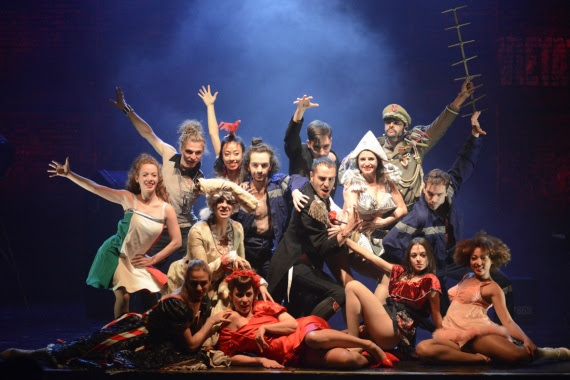 Full hall for the show “Le Musichall in tour“, staged at the Teatro Vittoria in Rome from 10 to 20 January.

A real “show” crackling, light, surreal, fun made of many unexpected drawings, whose protagonists range from dancers to magicians, from soubrettes to comedians-funny, from opera singers to acrobats.

The 14 good artists on stage delight the audience with unexpected numbers, like that of the duo composed by Silvia Laniado and Martina Soragna, from the name “le due e un Quarto”, or comedian Mr. Bang who also enjoys his funny way to enter the scene, or the elusive performer Peter Welters.

Created and conceived by Arturo Brachetti, Directed by Stefano Genovese, from the first to the last scene of “Le Musichall on tour”, we find ourselves pleasantly captivated by a happy and sometimes bizarre atmosphere.

Light and intelligent, irreverent and unusual, brash and poetic, rich and decadent.

All of this is Le Musichall in Tour, a show that proposes a whirlwind of artists, fourteen, with an eclectic line-up that portray grotesque, almost Fellinian characters.

All on a stage that could be that of a Berlin kabarett of the ’30s. An unusual alchemy has created an exceptional company made up of poisonous poets, dwarf-faced poets, melancholy singers, improbable acrobats, surprising soubrettes, ridiculous comedians, disillusioned illusionists and canine dancers. The Master of Ceremonies Diego Savastano traps us and binds the comedy duo Le due and un Quarto (Silvia Laniado and Martina Soragna), the illusionist Filiberto Selvi (Italian champion of magic 2017), the performer Peter Welters, the metropolitan clown Benjamin Delmas alias Mr. Bang and the dancers Ilaria Anania, Arianna Capriotti, Valentina Lideo, Martina Mattei, Linda Valerius, Shinai Ventura, Jesus Bucarano, Francesco Gerbi.

It comes out a sparkling show, comedian, goliardic and winking, sometimes dreamlike and surreal. The Musichall on tour, starting from the theater that gave him the name where he was welcomed by a great success, overwhelms the audience with many different stories that are able to entertain with 90 ‘of show … shamelessly entertaining.

The Musichall of Turin is the theater of the varieties with the artistic direction of Arturo Brachetti, the international master of quick change and the Italian theatrical actor today most famous in the world. The project stems from the collaboration between Arte Brachetti srl and the Opera Torinese del Murialdo, with the aim of revitalizing those forms of popular and engaging spectacle, of varied art, theater and music, in which a light, entertaining and quality, transversal for proposals and for disciplines, international in its approach, able to accommodate those realities that are struggling to find a place because they are ‘different’ compared to traditional labels, not falling within the classic schemes.