What does Processo a Fellini, a theatrical performance on the great Giulietta Masina have, if compared to any other so far realized?

Since the beginning of her career, Masina’s image has been associated with Il Maestro, Federico Fellini, her husband..
Although defined as brilliant actress, a female Chaplin, Giulietta will be remembered above all as “ the wife of the great Fellini ”.
Inspiring muse who, over the years and, turning away from the spotlight, has increasingly taken on the traits of a resigned woman to live in the shadow of her husband, removed from his continuous and ever more explicit betrayals.

And so, while Federico Fellini publicly confessed himself in Otto and Mezzo, she withdrew into a slow melancholy solitude.
As time passed, as collaborations with her husband were going to thin out, her image was associated with that of a reserved woman, resigned to having a brilliant husband, yes, but incurably unfaithful. Her latest interviews (more and more rare with time) reveal a woman removed from the true essence of their union, made up of flows of escapades and within an almost extended marriage with Sandra Milo.

What would have happened if Giulietta had publicly expressed her frustration as a woman, wife and artist? not exactly what he tried to make of her in Giulietta degli Spiriti as here, represented in a pièce that gave voice to her offended humiliated elements, and why not only resentful but also so angry? 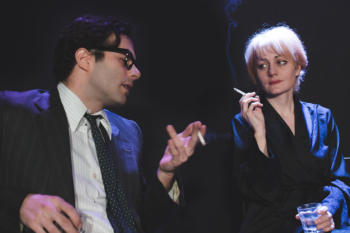 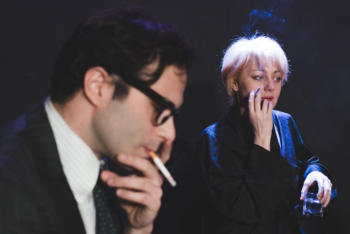 Processo a Fellini intends to pay tribute to the immense talent of Giulietta Masina, snatching it from the cumbersome characters of Cabiria and Gelsomina, to give voice and dignity also to her shadows.

The show combines biographical elements with others of pure invention, in tight rhythm, almost a psychological thriller or … even, a kafkian nightmare that will reveal its secret only at the end.
We will witness the metamorphosis of a reserved woman, relegated to an imaginary of childish purity, into a conscious, adult and vindictive woman.
A sort of journey into the soul, not only of Giulietta’s, but of many women who lived in the shadow of a cumbersome, untouchable, and sometimes indifferent man.

Processo a Fellini is an 8 e Mezzo from the viewpoint of Masina and which actually debuts in the year of the centenary of Federico Fellini’s birth year!
Federico Fellini has donated universal films to the world, which have provided, and will continue doing so, the understanding and indications of the time in which they were made, and of the times in which they were set. 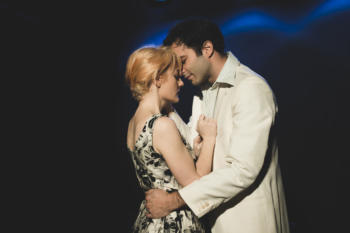 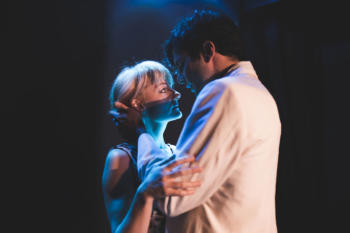 An ideal interpreter for Processo a Fellini debuting 2019 is Caterina Gramaglia, actress of great versatility, former author and interpreter of Le Lacrime di Giulietta, to whom Gramaglia has dedicated years of study and research.

In an interview, Gramaglia shares with us that this preparation was long and stun, for a work, a theatrical representation, that will be emotionally loud harrowing, but for many of us women, our cathartic opportunity.

Actress and co-producer, she tells in the telephone interview “ is a Giulietta, a totally different Giulietta, just so different. Different from our Masina imagery, it is not a Gelsomina … It is a more combative Giulietta, which wants to give voice to her own, and to many women, to their feminine, to the weary betrayed, not considered, but above all, so betrayed for so many.
A Giulietta that you see portrait, in her’50s epoch, that could not say a word, … she did not say anything,… she even defended Fellini in public, protecting her man and recognized artist.
And then finally, instead, it was time to crack, and start talking. ”

Alongside Caterina Gramaglia, there will be playing diverse roles, Giulio Forges Davanzati, a versatile actor who is divided between big screen, tv and theater, with also considerable success.

Processo a Fellini, from an original idea of Mariano Lamberti and by himself directed, written by Riccardo Pechini, is a raw and compelling text, which narrates the darkest and most painful sides of a union between the worldly most famous couple of last century, still deprived of its flesh in what may be called public imagination.

On stage there will be real and / or imaginary figures, including an old love of hers, characters from the films she plays in, Marcello, and, of course, Federico, with whom she will have a finally open confrontation.
The rhythm becomes tight, up to paroxysm in which anger will be replaced not by resignation as the costumes of the time would have wanted, but the claim of a long, repressed, femininity and transformation into an aware woman, determined and reconciled with the past .

And for you, Dear Gentlemen, Processo a Fellini, this very show, what will represent ?

Civico 54
The performance “Processo a Fellini” draws the naissance of a Cultural Association Activity Associazione Culturale Civico 54, union between what is considered to be pure Cure and Art .

PROCESSO A FELLINI
on stage the secret shadows of the director and man, and of his muse, Giulietta Masina