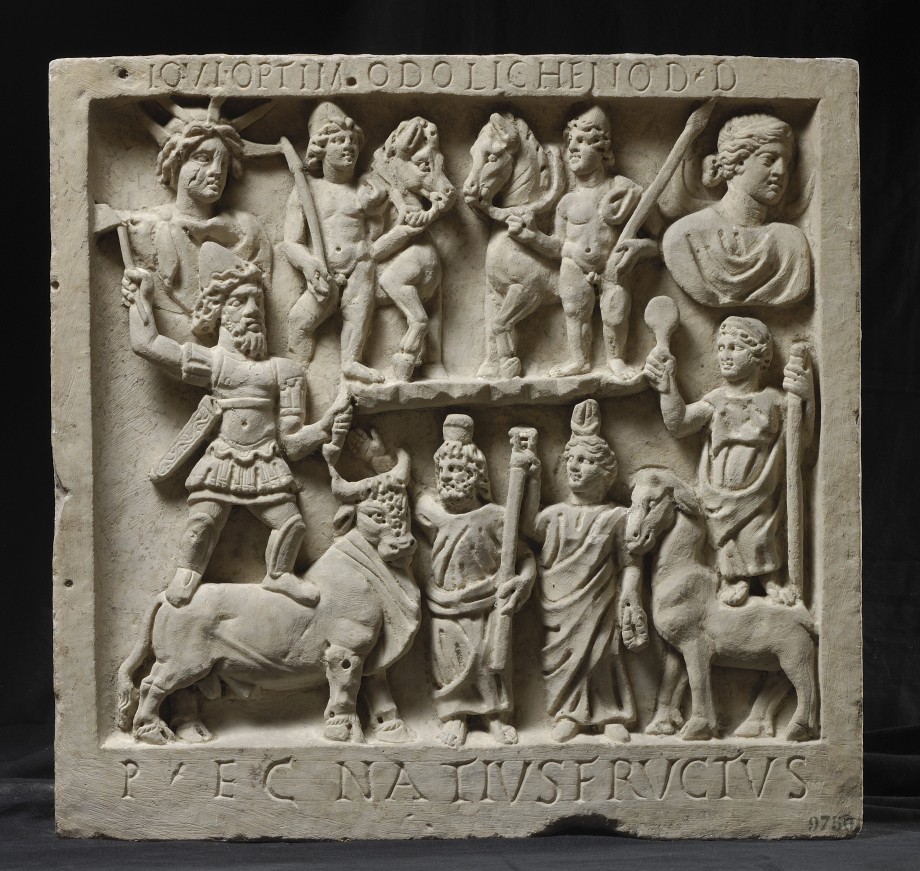 From January 28 to October 4, 2015 the Musei Capitolini are the set to the fourth appointment of the cycle “I Giorni di Roma” a major exhibition of ancient Roman art ranging from the Republican era of late antiquity. The crisis period of the Roman Empire is just one step in a five-year project of exhibitions that alternates monographic exhibitions (Portraits. The many faces of power, Building an Empire), exhibitions from cutting diachronic (The Age Conquest, the Age of Balance, the Age of Anguish), from the Republican era until late antiquity.

The Età dell’Angoscia (Age of Anguish) reflects on the decline of the Roman Empire as a metaphor for deeper economic and political crises of the current through the series of images that bear witness, from a temporal point of view, the crumbling of civic values, moral and political. Signs of the inevitable collapse of empires, civilizations and dominant cultures. The exhibition aims to deepen the knowledge of a historical period of great change that marked the age between the reigns of Commodus (180-192 AD) and Diocletian (284-305 AD), which historians of the time called it “the transition from an empire of gold to a rusty iron “. In less than one hundred fifty years, in fact the Empire changed its character, coming to the establishment of the Tetrarchy and the loss of the role of the capital city of Rome. In this time the news highlight some elements that recall, albeit with some differences, our topical, such as the increase in pressure on the borders of the peoples, the thrusts secesioniste (think of the Empire of the Gauls and the Kingdom of Palmira), internal disturbances (which led to structural reforms of the traditional Roman military unit, the legion), the crisis of the traditional economy, inflation and the consequent need to continually update the currency, and above all, the serious instability policy (the so-called “military anarchy”). 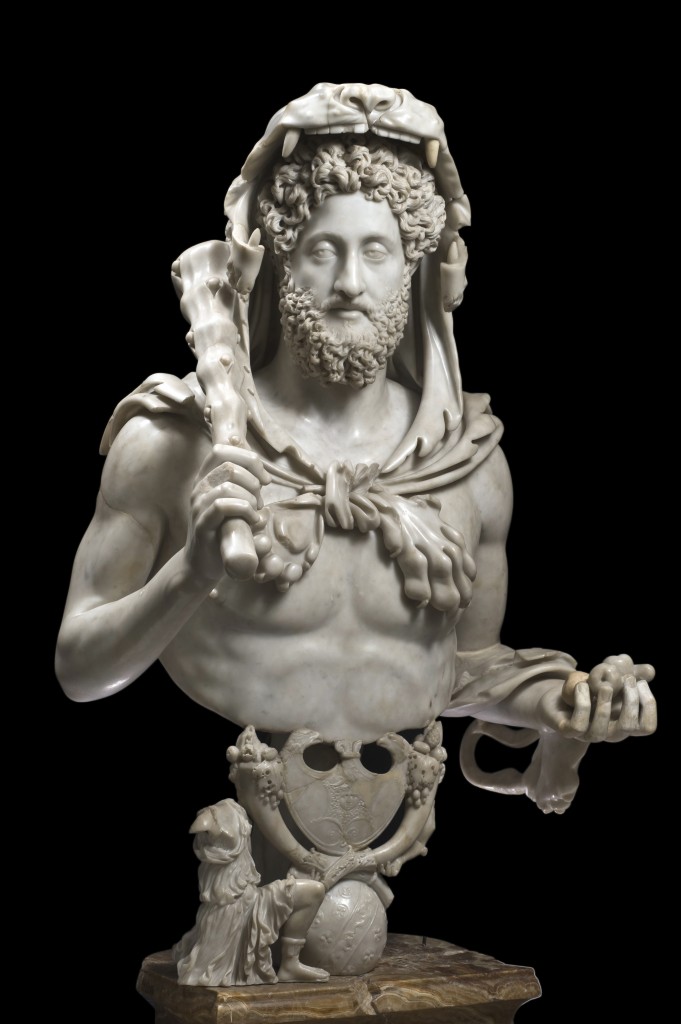 The first section, The protagonists with about 92 works is a rich presentation of portraits, statues and busts of emperors, kings and their wives, and even the wealthy citizens of the time;
The second section presents the army with over 20 works by the army as one of the major players in the new era, capable of tremendous power, even to impose or remove emperors him unwelcome;
The third section, dedicated to the city of Rome with 14 works, tells the great changes in the third century deeply mark the city of Rome in its identity, from the construction of the city wall that will be called “Aurelian Walls” (and still marks the urban landscape of the city), the presence of large military barracks, the creation of a marble map of the city in a big way (so-called Forma Urbis Severiana);
The fourth section Religion through 52 artworks brings us a phenomenon of great importance that the arrival in town of oriental cults, and you will go to support slowly to traditional religions celebrated until then: Iuppiter Dolichenus, Mithras, Helios-Sol , Sabazio, Cybele / Attis, Isis will be able to attract a large mass of the faithful, and to answer some of the needs that will lead in the short extraordinary affirmation of Christianity;
The fifth section Rich private mansions and their furnishings with about 30 works offers a look on private spaces, tastes and household equipment of some of the richest private residences of the time;
The sixth section Living (and die) in the Empire, about 7 works tells Roman citizens outside the capital: their tastes, their daily activities, their images funeral;
The seventh section burial customs consists of 24 works: sarcophagi, reliefs and paintings with a rich presentation of themes and subjects, drawn from the repertoires of traditional myths and innovative second languages and tastes now completely different. 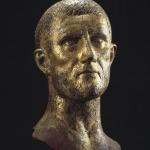 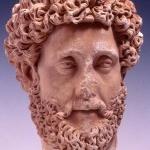 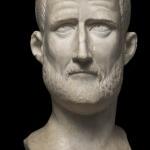 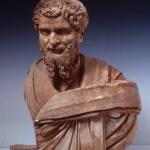 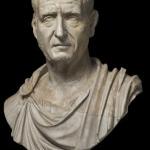 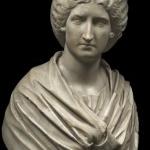 The language of official portraiture transmits in complete form this passage: the faces of emperors are tilted, eyes dilated beyond the norm naturalistic and pursed lips, as seen in the “colossal portrait of Probus” or even “the bust of Decius” or the extraordinary “statue Treboniano Gallo” from the Metropolitan in New York or in the statues that come out for the first time since the Casino Belrespiro Villa Doria Pamphili “Statue of robed”, “Statue of Hunter” and “Statue with sword and head” that together with the “Statue of hunter” of Museums Capitoline, all Gallienica Age, will for the first time together. 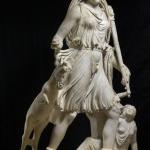 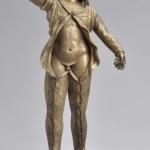 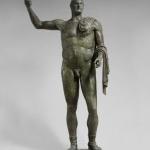 In private portraiture became fashionable the combination of portraits of the dead bodies with ideals, reminiscent goddesses like Venus, Demeter, Luck, as in “statue Omphale” or heroes like Hercules, which allow a clear enhancement of the quality and deeds of the deceased due to the assimilation of their heroic virtues, clear examples we find them in the “bust of Commodus as Hercules” and “statue private as Mars, called Decius.” Demigods like Hercules, Dionysus or the Beavers were particularly favored in this respect also dall’imagerie imperial, by their very nature of mortals become of thanks to the extraordinary quality of the historic achievements. The exhibition tells the widespread crisis spiritual and religious in an atmosphere of anxiety and fears materials and existential mistrust and led to the forfeiture of the deities and rites and increasingly massive accession to the worship of new gods from the East: Isis , Cybele, Mithras, and of course Christ. Concrete problems and materials are not lacking to justify this pessimism: civil wars, financial and economic crises, political corruption at all levels, famines, epidemics (such as those under Marcus Aurelius and Gallienus) and the perennial threat of the barbarians. For astrologers, soothsayers and oracles men and women of the time frequently repeated the same questions:
“I will make to beg?”
“I will have my wages?”
“I’ll be sold into slavery?”.
The need for a more secure future was so widespread and urgent to feed everyone in what historians of antiquity called an expectation of salvation, tied in first place of the emperor, in theory guarantor of justice, military security Empire and also the supreme religious authority. 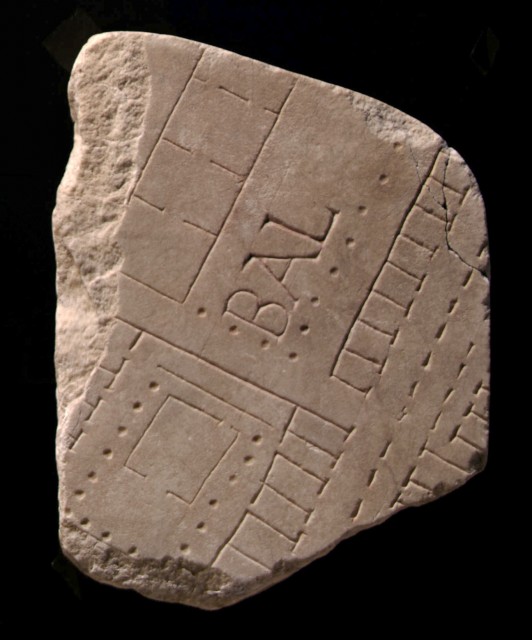 The title was inspired by the book of the great scholar of Greek culture Eric Dodds “Pagans and Christians in an age of anxiety” of 1970, which is dedicated to the third century AD Already friend of Anglo-American poet W.H. Auden, who in ’47 publishes The Age of Anxiety, a poem that highlights the emptiness of existence during the Second world, characterized by the conversion or return to Christianity and the will to adhere to a religious belief, a “leap in the faith. ”
The project involves prestigious international museums like the Met in New York, the Museum and the Zentral Landes Museum in Mainz, the Glypthotek of Monaco and national, as well as the Musei Capitolini in Rome, taking part with important loans the Aquileia Archaeological Museum, the Museum of Santa Giulia in Brescia and the Civic and Archaeological Museum of Bologna to get to compose a rich selection of about two hundred works of extraordinary artistry. Imposing statues in marble and bronze, full size, in some cases measuring colossal busts and portraits, marble reliefs, sarcophagi and urns, mosaics and pictorial wall decorations, and even precious silver tableware, architectural elements and figured altars allow appreciate closely the taste of an entire era, to reflect on the changes on the formal and figurative themes presented by objects that decorated the urban spaces and private (houses and tombs).

One comment to “The Age of Anguish from Commodus to Diocletian, in the Musei Capitolini”