Inspired by a true story, the story of Federico Caseddu fifteen years old boy from Sardinia, which led Marco Pollini shooting this film which, although full of stylistic naivete delivers, to whom watches it, the dramatic nature of its content.
And afterall, of some stories of women and children, it is always better to talk about it, and the more to talk about it, the better.

So congratulations to Marco Pollini whom signs the script, the production and direction of his second feature film; congratulations to the Sardegna Film Commission Foundation, which funded a craft and a free from any ego film. Following the preview screening Pino Ammendola who has had the most uncomfortable part to play, that of an incapable father and man “that even as naive as it is this movie, it is a valid attempt to realize something poetic”.
Certainly MODA MIA received the benefit of a creative urgency, for which it was written, produced, shot in four months only, certainly an ambitious project, pursued with tenacity, passion, dedication, and the support of a full Sardinian crew .
A contrast can be read, a disharmony let’s say, however, between the rural shots, and the narrative time, between the aesthetic content of the image, the frame itself, which does not convey the drama of what is being narrated.
It is a hay-colour drama, but the crucial points of the script get to disappoint: common places where both aesthetics and content do not fully persuade.

However, in this dramatic genre focused on social issues, are the people who make the difference, people and their true nature, and sincere enthusiasm.
The protagonist child, Francesco Dessous in Giovannino, is good at what he is doing : at the interview we were told that during the filming each scene was right at the first shot, he attends a theater course in Cagliari and looks really cut out to be an actor.
Then we have the mature, gently balanced, multifaceted Italian actor Pino Ammendola, voice dubber for movies by Pasolini, Fellini, Monicelli, Scola, Amelio, Tornatore and Kubrick (!), whom, in this film, playing the worst character this very story could hand out to us, pulls out a spectacular Sardinian accent, especially in those scenes in which the character reveals the roughest and rawest edges of his nature.

Special Guest the surely known by the public Melissa Satta.

Something indeed praiseworthy may not be skipped still: the film is as observing free-range cattle in extremely rural setting, raw, true, as inland Sardinia and neorealist cinema. The truth is that, today, real life has become fiction… still, noone can take away from us our ancestors in dream, our guardian angels, and the magic of when we talk to ourselves, about ourselves; how wonderfully Giovannino does this whilst talking to his sewing machine is the absolute reason for watching MODA MIA…

Congratulations Marco Pollini, what it is achieved is certainly far more courageous and admirable than sitting and watching life dramas of others, which do pass under our very eyes as at very high-speed trains which let us barely distinguish the train colors. 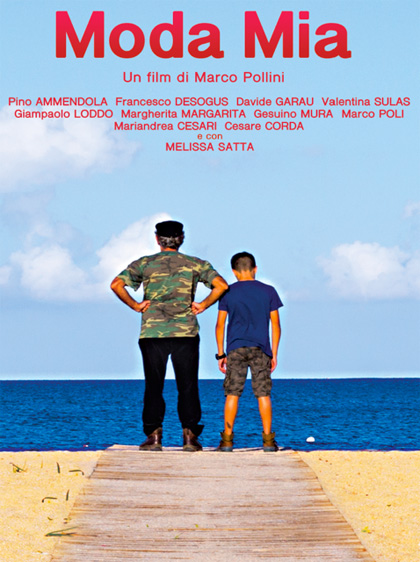