“Othello“, the most representative tragedy since Shakespeare, that shows human passions is on the stage at the Globe Theatre of Roma until August the 5th. The archetype of love passion and of psychological drama, it is an intimate and familiar history of violence and strong colours, by the direction of Marco Carniti.

VICTIM & OPPRESSOR
Othello, the Moor General of the troops of the Republic of Venice, is a man all hierarchy and discipline. He lives in a world where feelings are under process and his love for Desdemona becomes a torture. We see Othello’s political and cultural fall and the triumph of instinct in front of deceits, that reveal his weakness. 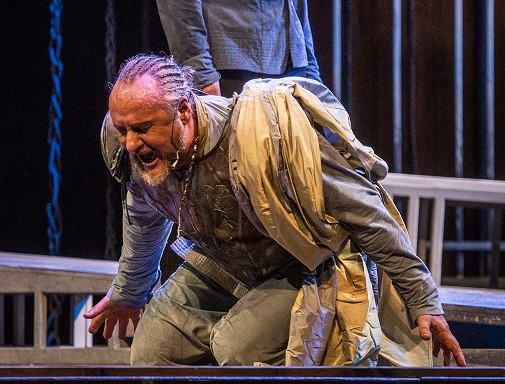 On the other side Iago, a very appreciated Gianluigi Fogacci, is a rancorous and vengeful soldier. He is the mind of the drama, who manipulates the protagonists’ life. They are all puppets in Iago’s hands, the triumph of an evil genius. But at the end, the oppressor, in spite of himself, becomes his own victim.

The effective scenography itself suggests a sense of claustrophobia, the moving gates on the stage become the physical and spiritual prison of the protagonists.

Shakespeare starts from the political and racial problems to go deep inside the human psychology labyrinth and enlighten real soul nature. It is an interesting experiment, effective also today: which is the man reaction in front of extreme emotional pressure? In the schizophrenia between good and bad the irrational part prevails upon everything and kills reason.

OTHELLO & IAGO NOWADAYS
The public and private dynamics reveal that we all are Othello, victims of our own dark side. Even in the third-millennium doubt and uncertainty could make conscience collapse and man a victim.
On the other side, a revengeful slave could be a nowadays kamikaze. The author of a diabolic plan of political and social rebellion, unaware that his bomb could blow up in his own hands.

“Be careful because we all are Othello. The dark is part of us. We all are victims of our dark side that makes us fragile and self-destructive, pushing into the emptiness and darkness. It is easy to change a rock into powder.”
Marco Carniti, Director

Marco Carniti was born, as an artist, with dance and than grew up with opera, theatre and cinema. A complete director, to discover more about him click here.

Gigi Proietti, the artistical Director, celebrates the Silvano Toti Globe Theatre program with 15 years of activity, a forge of classical theatre made current. To see the next appointments of the Season click here.