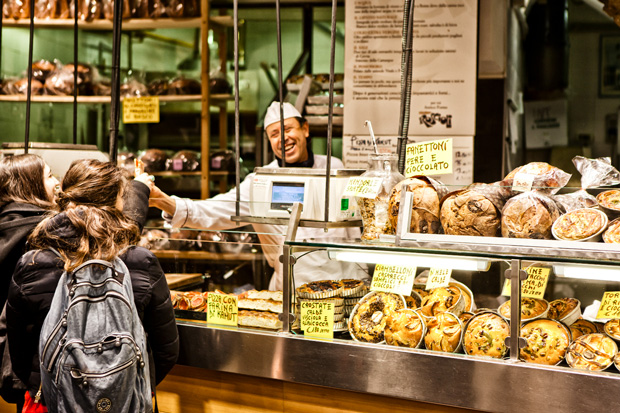 When you move from city to city but especially from one country to another, as it was for me for the long stay in Manhattan or Paris, to all administrative and bureaucratic obstacles think, often forgetting that what will you miss most is the flavor of the bread and hot pizza of Rome.

How wonderful are the baguette in early Parisian stay, or fresh bagels on Sunday morning in New York, but it’s been six months even the muffins with a sweet tooth they are bored. Would you like a croissant made from a pastry instead of buttery croissant or a loaf of bread with the crust, or the white pizza oiled, who scrub the seat of the car and the bag.

How do you share with an Australian, what a bruschetta (a slice of bread and not bruscato- fritto- seasoned with garlic and tomato). If you do not have a loaf of bread that weighs at least one kilogram with wide alveolus of prolonged leavening and a fragrant crust whose sound while the cuts is’ turn dog and cat at the same time?

In the school of the 70s during the break there were no snacks and a few guys had a nanny who prepared a cake, all the others, they ate a piece of white pizza oiled and loaded with salt or dirtied the bench with mozzarella that was spinning on the red pizza.

The alternative was a sandwich composed of a rosette (bread printed rose-shaped leavened up to the point of being empty internally) perfect to be filled with mortadella or salami.

These are the smells and textures of bread and Roman pizza which I missed over the years.

Bread, rolls, biscuits fragrances and perfumes them can still be found in Rome because often, those same kids who went to school with the pizza made by his grandfather, took over the oven and updated the offer.

To help them find those wonderful flavors and aromas we mark:

Behind my grandmother’s house just before you catch a glimpse of Santa Maria Maggiore is a historic bakery today temple of pilgrimage for aperitifs. The quality of ingredients has always been part of the history of a family that since 1929 has produced bread, pizza and sweets like there’s no tomorrow in a refined setting with uninterrupted bid. Croissants, cakes, fried, different kinds of bread (regional varieties Neapolitan, Abruzzo and Sicily) and pizza (they call it here strip cooked to the ground) is unforgettable and unmissable even though it could cost you dearly this Proustian experience! 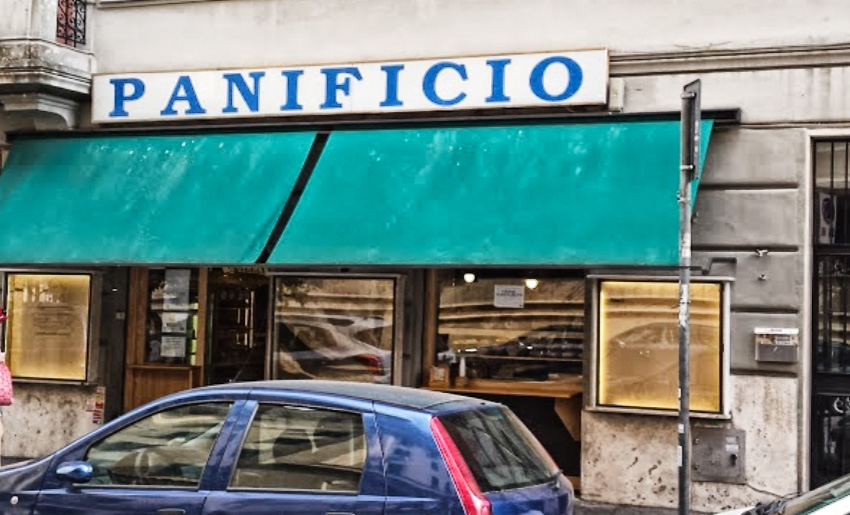 In a small room, crammed to the rafters might find the baker, pizza chef, chef and TV star: Bonci himself. If you had lost in the “Try the chef” – Rai program available on youtube or on Rai Play- you taught Urbi et Orbi producing breads and pizzas revealing all the tricks of a thousand-year tradition of baking as the Roman. Not by chance in this small space you will find the true bread of Lariano or multigrain, rye, white, bland, white pizza, red and pizzas. 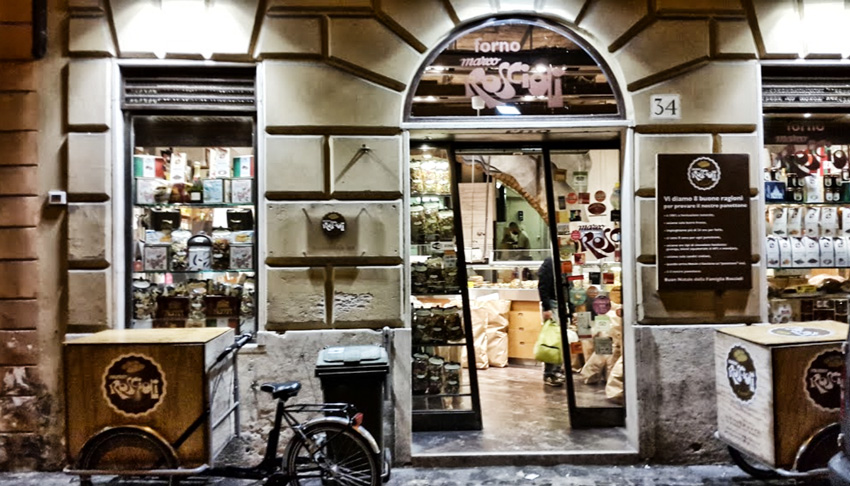 The history of Rome ovens starts here, in a shop near Campo de ‘Fiori, where he urged an oven from the first half of 800, detected by Marco Roscioli in the last century. The activity has now passed to the four children Anna, Pierluigi, Alessandro and Elena, who at the same time run the restaurant and wine bar.

Flour and tradition have made this one of the best bakery in town. The selection is virtually endless and involves the use of whole grain flours, natural yeasts, sourdough and biga. The pizzas recall those childhood with little crispy edge and the soft, well-seasoned center. The sweets of this bakery has nothing to envy to Madleine Proust always observing a Roman declination then you will find the pies (the excellent ricotta and chocolate), the cakes, cookies and gastronomy. 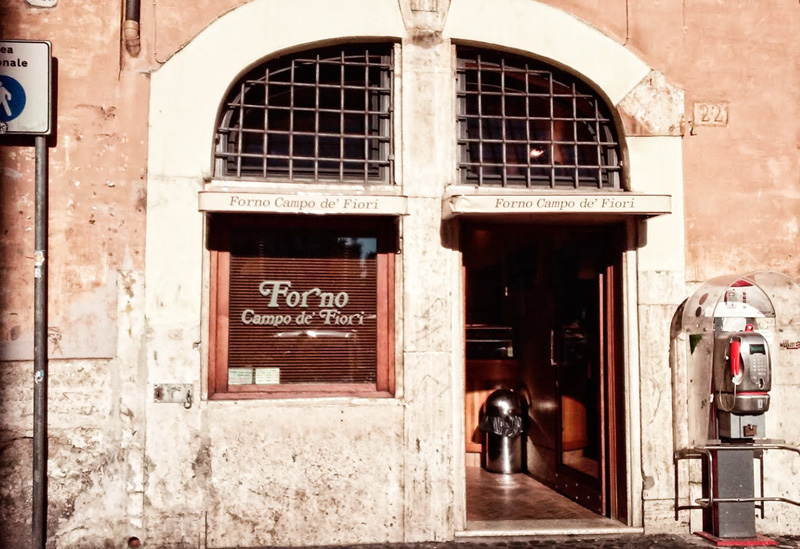 The oven of Campo de ‘Fiori is the oven of the square where it was burned Giordano Bruno, where there is one of the most beautiful street markets of the Old Town is the heart of the Roman button, the true spirit of the bakery in the capital.

Baked you go for a slice of pizza, reigns over all white – the best of Rome – crispy, oily and tasty at the right point, or simply be stuffed with mortadella. The second counter offers traditional sweets, biscuits, cakes and tarts. 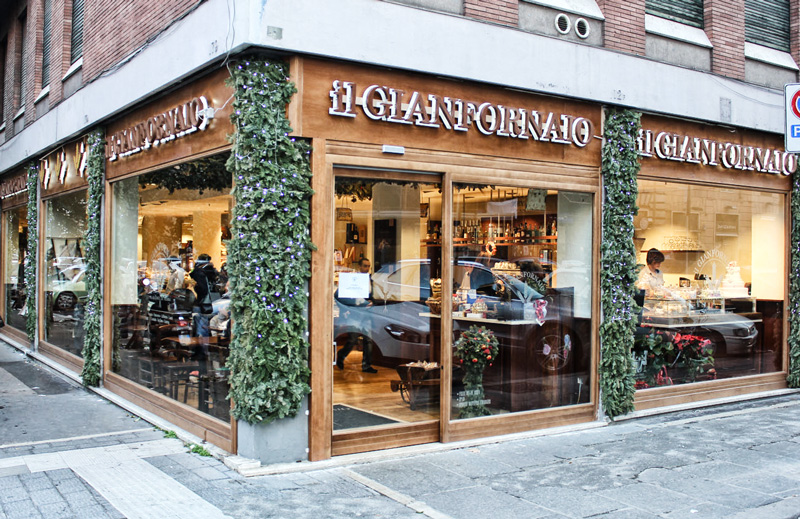 Today Gianfornaio has 5 beautiful shops and a tour on the site you will have quick idea of the wonders offered by this brand, because it is no longer just a Wonderland oven but a quality brand in the Roman bakery. I remember the opening of the first store in Ponte Milvio in the 80s, to the amazement of the wall guys who could finally get traditional pizza beside the Tiber. Born this oven near the Ponte Milvio local market as for the oven of Campo dei Fiori. They were the merchants in the area the first to appreciate the introduction of the old flour and the ability to make attractive a bakery transforming a shop in a trendy restaurant.