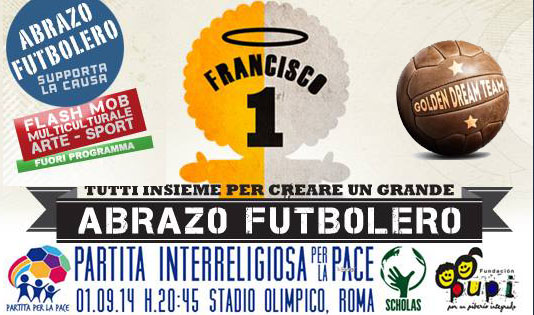 Sport is a tool for communicating the values, which foster the good of the human beings and contribute to build a more peaceful and fraternal society. Let’s think about loyalty, perseverance, friendship, sharing and solidarity.”

These are the words of His Holiness Pope Francis, who showed for himself the intention to organize an international sporting event, which could be the occasion for the different religions of the world to meet and fraternize.
On September 1st, 2014, in Rome, the best soccer players in the world, will represent many religious faiths and will give life to the first Interreligious Match for Peace, a historic and engaging appointment , which will be based on spirituality, fraternity and sporting excellence, in the name of the dialogue among peoples for the peace in the world.
The event is promoted and organized by two associations, both active in the spread of the highest sporting values and in the concrete support to childhood and adolescence: Pupi Foundation (www.fondazionepupi.org) and Scholas Occurrentes (www.scholasoccurrentes.org).

The Interreligious Match for Peace on Monday 1 September 2014 at 20:45 at the Stadio Olimpico in Rome.
The exhibition includes a broad selection of the best players of today and yesterday in the world, representing different cultures and religions: Buddhist, Christian (Catholic, Protestant, Evangelical), Jewish, Hindu, Muslim, Shinto. A unique opportunity to demonstrate how sport, the great football in particular, can convey a message of brotherhood and sharing that unites all nations in the name of Peace. Fantastic samples working in the field will create a performance that will unite symbolically the entire planet in the name of the most authentic sporting spirit at the same time dedicating a moment of reflection on the importance of peace in the world. The Stadio Olimpico in Rome will in fact be connected on live television, web and radio media from all continents.

The proceeds of the initiative – inspired personally by Pope Francis and organized by Scholas Occurrentes and PUPI Foundation – are intended entirely to finance the project “An Alternative Life” that will give thousands of children and young people of Buenos Aires practical support, structured and continuous basis and will promote the development of the Network of Schools for the Meeting.

“ABRAZO FUTBOLERO ”is a word which in Spanish means Hug soccer.

in itself an oxymoron given that football in this period, rather than unite, sharpens the rivalry between fans, club, city, players, countries, sparking waves of unjustified violence.

To send a message of peace and brotherhood, José Vito Arena, artist and designer Italo-Argentine resident in Italy for over twenty years, has decided to create an event that is gaining more and more support. 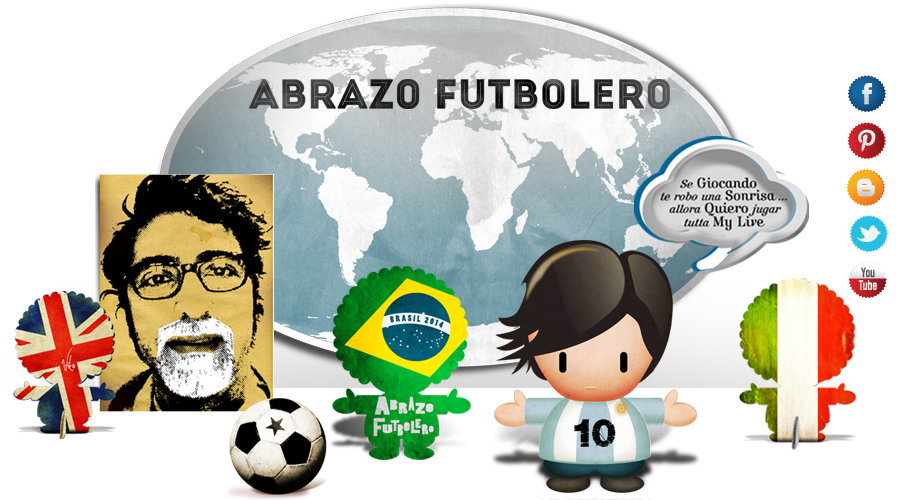