On July 27, 1996, a homemade bomb exploded at Centennial Olympic Park in Atlanta, the host city for that year’s Summer Olympics. Two people died and 100 were hurt in the attack.
The movie, based on a book by Kent Alexander and Kevin Salwen, “The Suspect,” and a “Vanity fair article” by Marie Brenner, isn’t about the bomber( Eric Rudolph, arrested in 2003), but rather about the security guard who found a backpack full of explosives and shrapnel under a bench and sounded the alarm.
Though he acts bravely and responsibly at a moment of crisis, Jewell (Paul Walter Hauser) isn’t entirely a hero, and “Richard Jewell” doesn’t quite belong in the gallery with “Sully” and “American Sniper”, Eastwood’s other recent portraits of exceptional Americans in trying circumstances, but is a morality tale about the vulnerability of the individual citizen in the face of state power and about the fate of a private person menaced by the machinery of publicity.
Eastwood, cleverly invites the audience to judge Jewell on the basis of prejudices we might not even admit to ourselves. He’s overweight. He lives with his mother, Bobi (Kathy Bates). He has a habit of taking things too seriously and of trying a little too hard to fit in, but Eastwood
makes the radical decision to respect him as he is, and to show how easily his honesty and decency are distorted and exploited by the predators who descend on him at what should be his moment of glory. 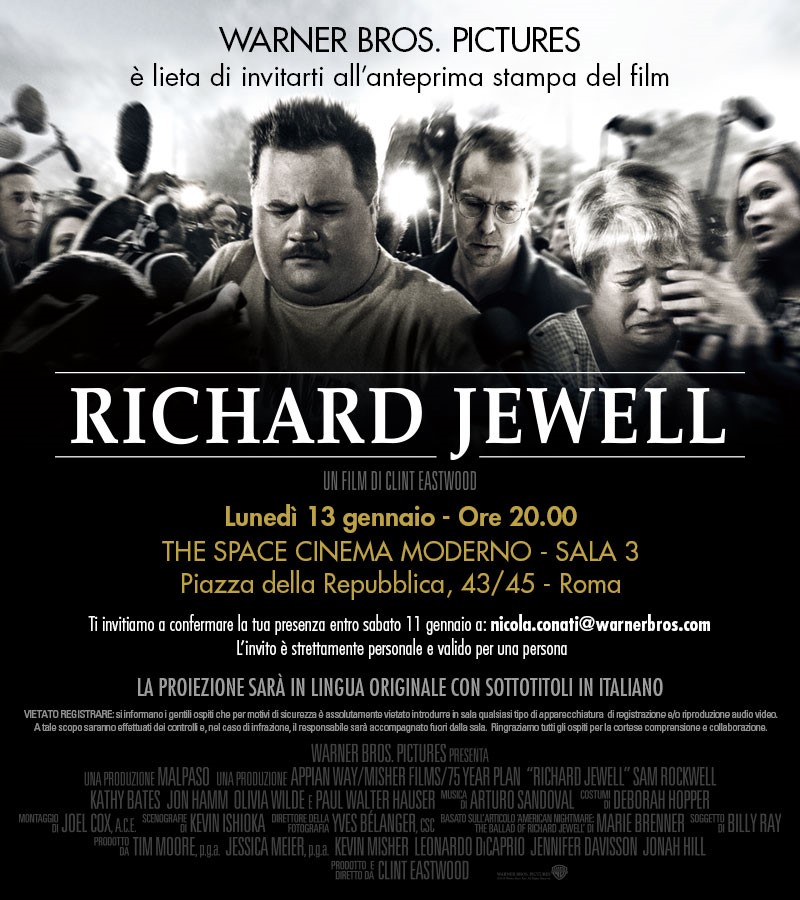 Screenplay by Billy Ray
Based on “American Nightmare: The Ballad of Richard Jewell”
by Marie Brenner

During the 1996 Summer Olympics in Atlanta, security guard Richard Jewell discovers a suspicious backpack under a bench in Centennial Park. With little time to spare, he helps to evacuate the area until the incendiary device inside the bag explodes. Hailed as a hero who saved lives, Jewell’s own life starts to unravel when the FBI names him the prime suspect in the bombing.