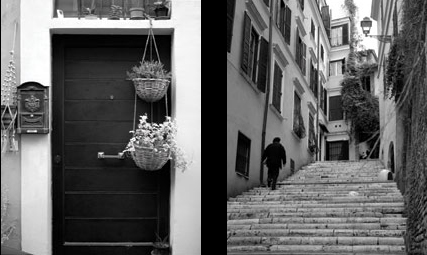 The center of Rome is divided into 22 “Rioni” (districts). This has its origin in Augusto’s era when the town and its neighbourhoods were divided into 16 regions. However, only during the 18th century did the city acquire its present configuration. In 1744, each ‘Rione’ was assigned an heraldic armorial bearing which is still visible on the walls of many central streets. Among the 22 ‘rioni,’ 19 are situated on the Tiber’s east bank, while the other 3 are on the west side. 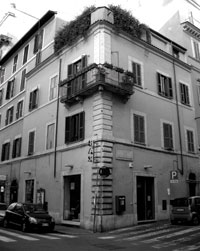 Monti is the first ‘rione’ and together with Trastevere, is considered the most important and largest ‘rione’ of the city. Monti and Trastevere inhabitants consider themselves as real ancient Roman descendants; in these two ‘rioni,’ it was possible to find the strongest and most vigorous young men and the most beautiful women. For this reason the inhabitants of the two ‘rioni’ often fought against each other throwing stones at ‘Campo Vaccino (Foro romano)’ in the attempt of proving who was the strongest. However, after these fights they all went to drink wine in the ‘osterie.’ Even mixed marriages between people of different ‘rioni’ were not advisable; the choice should be among boys and girls from the same ‘rione.’

The name ‘Monti’ derives from the presence of the 6 hills in its territory: Viminale, Quirinale, Celio, Cispio, Oppio and Fagutale. The hills also characterize the Monti armorial bearing which shows three hills repeated three times.
In ‘Rione’ Monti there are many important Roman ruins such as Fori imperiali (Il Foro Traiano, il tempio di Augusto e di Nerva), the Ludus Magnus (gladiators gymnasium), Tito’s thermae, Traiano’s Thermae, and part of the Servian and Aurelian walls. Upon Oppio hill there’s part of the ruins of Mecenate’s villa and also Neronian Domus Aurea. During the Roman era, 7 thermal baths were situated in this area. During the roman period this area was called the Subura or Suburra: it was a marshy area inhabited by thieves and prostitutes.
The Middle Ages have left behind some towers in this area, in fact during that period each important family had their own tower (the most important families had the highest and biggest towers). Even though many of these towers have been destroyed, about 30 still remain visible. The tallest is the Conti tower not far from the Colosseum. Once its height was twice as it appears today and it was considered one of Rome’s wonders. Even Petrarca (the famous poet) named it.

The Middle Ages have also left behind beautiful churches in Monti, such as Santa Prassede and Santo Stefano Rotondo. Santa Maria Maggiore and San Giovanni in Laterano, Rome’s cathedral, started being built for the first time in the 4th century and then modified several times until the 18th century when it assumed its present aspect. During the Middle Ages, for about 1000 years, all the popes have been crowned here.
In this area is also situated San Pietro in Vincoli church, originally built in the 5th century: here there are the preserved chains used to imprison Saint Peter. They are shown once a year on the 1st of August. Furthermore, in this church, there are pope Giulio II’s and Michelangelo’s tombs, as well as the famous Michelangelo’s Moses, a perfect statue that, according to legend, the artist struck saying, ‘Why don’t you speak”
Until 1870 Monti was the largest ‘Rione,’ then it was divided in two parts, one coinciding with the present ‘rione’ and the other has become the present ‘rione,’ Esquilino. Nowadays Monti is the fourth largest ‘rione’ of the city.

This is a long and very pictoresque street in the very heart of Monti that cross Quirinale, Vicinale and Esquilino hills.
The origin of its strange name is not totally clear. It derives from an ancient tradition of Saint Lorenzo friars of distributing bread (in latin ‘panis’) and ham (in latin ‘perna’) to poor people.
Starting from the second half of the XIX century, the street became important from a cultural point of view. In fact, the first Feminine Professional School ‘Margherita di Savoia’ was opened here in 1876. Quintino Sella decided to transform Monti into the scientific center of the nation and during those years many scientific university faculties were opened here (the Chemical Institute in 1872, the Physics Institute and the Botanical Institute)
During the first half of the XX century the Physics Institute became very famous, in fact from 1926 until 1938 Enrico Fermi taught to a group of students called ‘I ragazzi di via Panisperna’ (via Panisperna boys). Ettore Majorana, Franco Rasetti Emilio Segr’ and Edoardo Amaldi belonged to this group and together with Enrico Fermi they contributed to the discovery that has completely changed our century: the Atomic Bomb.
Today the Physics Institute still stands, at number 90, completely hidden among the trees; it has been transformed into a museum.