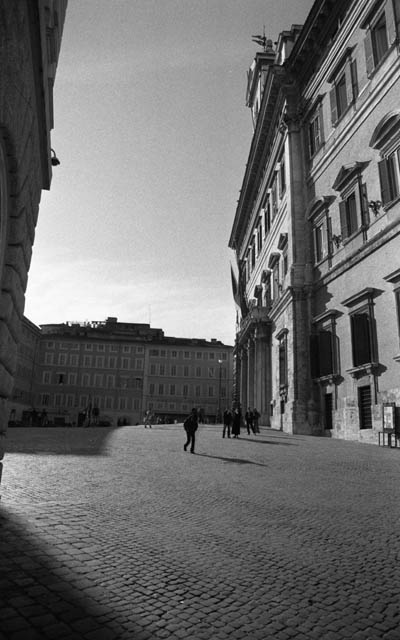 Colonna is the third ‘Rione’ of Rome. Its name derives from Marco Aurelio Colonna (Column), commonly known as Colonna Antonina, dating back to the 2nd century AD. It now stands in Piazza Colonna. 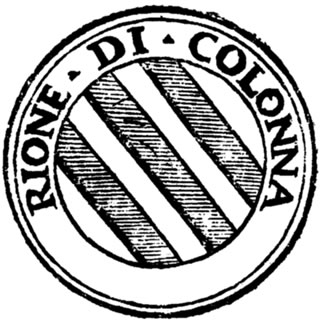 Rione Colonna boasts two different armorial bearings: one shows three curves on a white background, the other portrays the column of Marco Aurelio.
Walking around this Rione, you really have the feeling of touching the heart of the city; in fact in its territory we can find some of the most important monuments and places; the Pantheon, Ara Pacis, Campo Marzio, San Silvestro, Piazza del Parlamento, etc. Rione Colonna has a strange shape because it stands in the middle of five other Rioni. The western side is flat because it covers part of the ancient grounds of the fabulous Campus Martius, described by Strabonio as ‘one of the Seven Wonders of the World.’ 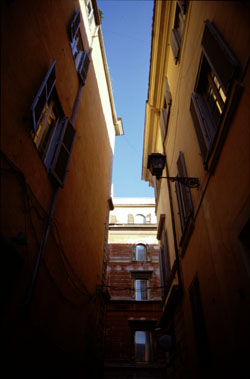 The eastern side, instead, is narrower and climbs up to Pincio hill. During the Roman Empire, this part of the city was managed exclusively by the Antonini family who had monuments built here to celebrate their power. In the Middle Ages, the gradual development of the city’s center started from here and included all of Campo Marzio. This Rione has never been densely populated until the late 16th century when the nobles, along with the richest Roman families, began to build many palaces along via Lata (nowadays known as via del Corso). During the same period, via Felice (today called via Sistina) was opened to link Pincio with the big Rione Monti. During the 18th and 19th centuries many painters and artists used garrets from surrounding buildings as studios, making this part of Rione Colonna an artists’ quarter. Rione Colonna’s heart, today as in the past, is piazza Colonna where the Marco Aurelio column stands. This column was put up by the Roman Senate to commemorate Marco Aurelio’s victories against the Germans and Sarmati people. The battles against these people are shown in the relieving frieze decorating the column. Inside, there’s a winding staircase with 190 stairs and at the top there was the Emperor’s statue; unfortunately it was lost during the Middle Ages and Pope Sisto V, in 1589, put a statue of Saint Paul on top made by Leonardo Sanzana and Tommaso Della Porta. Just behind Piazza Colonna, there’s Montecitorio Palace, the Italian republic Parliament site. The name, Montecitorio, derives from the Latin Mons Acceptorius, a small artificial hill created in the pre-Roman era by the inhabitants of this area to drain the marshland. Nowadays, this hill has reduced its height. To reach it you’ll find the street is slightly steep. In front of the Montecitorio Palace stands one of the city’s Egyptian obelisks. Not far from here, there’s piazza di Pietra, a very characteristic place where an entire side of a 17th century building is covered by the remains of Adriano’s temple (195 BC). These eleven columns are the only remains of the ancient structure and they have probably been able to survive until now thanks to the idea of embodying them in the building’s solid structure 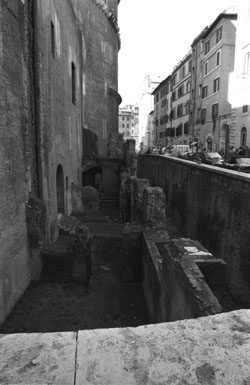 The most outstanding monument, in Rione Colonna, is the Pantheon, one of the most important ancient Roman temples. This temple was dedicated to all gods (as the name means: pan: all, teon: god). Menenio Agrippa built it from 25 – 27 AD. However, the building we see today is the one re-built in 117-139 AD by Emperor Adriano after the temple was seriously damaged by various fires that had very often spread throughout the city. In 608 AD, it was donated to the Pope and became a Catholic church.The Pantheon is composed of two main parts: one big round hall covered by a magnificent dome, the largest ever built (43,30 meters long) in ancient times and had inspired many architects during the Renaissance, and a rectangular atrium with columns in the front used as an entrance. Inside, there are the graves of the Savoia family and of great men like Raphael. 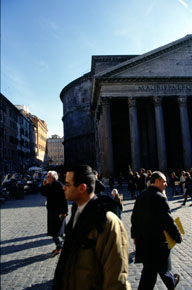 Another symbol of this Rione is the Ara Pacis. It is an altar built by the Roman Senate in 13 BC to celebrate the peace reached in the Mediterranean area by Augusto after the winning campaigns in Spain and Gallia.  It is like a rectangular box with the external facade completely engraved with wonderful decorations. Inside, a staircase leads to the altar. During the Middle Ages the Fiano palace was built on this site, and so the Ara was forgotten. It was first discovered in 1568 when, on via del Corso, 9 carved blocks belonging to the Ara were uncovered. In 1859 other carved pieces came out and finally in 1903 regular archaeological excavations began that lead to the discovery of the Ara. In 1937, the rebuilding of the Ara began and in 1938, it was collocated inside a glass pavilion that stands between via di Ripetta and Lungotevere Augusta. Today it is under restoration.

In ancient Roman times, in Rione Colonna, there was a very unusual building built where the San Silvestro Church now stands, called the Senaculum. It was like a big sitting room where Semiamira, Emperor Eliogabalo’s mother, met with the most influential Roman ladies to lay down the law on fashion, hairstyles and feminine ‘bon ton’. Some of these rules related to the number of kisses that suited a gentlewoman and the days of the week in which it was ‘charmant’ for the rich to allow their slaves to move them into the city. The decisions made on this site were ratified into real laws called ‘Senatoconsulti Semiamiriani’.