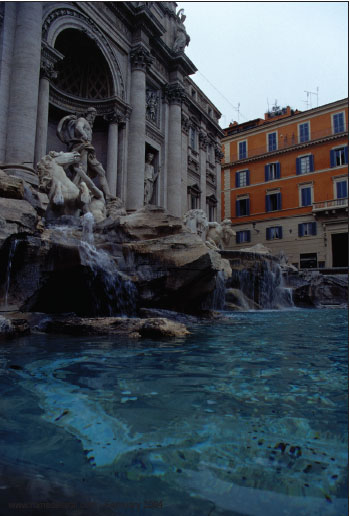 The center of Rome is divided into 22 “Rioni” (districts). This has its origin in Augusto’s era when the town and its neighbourhoods were divided into 16 regions.  However, only during the 18th century did the city acquire its present configuration. In 1744, each ‘Rione’ was assigned a heraldic armorial bearing which is still visible on the walls of many central streets. 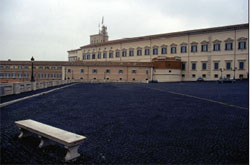 Trevi is the second ‘Rione’; Pope Benedetto XIV founded it in 1743. Its name derives from the middle age word ‘Trivium’ meaning ‘three roads crossing’; probably this ‘trivium’ was located in the place in which nowadays stands Trevi fountain. Its heraldic armorial bearing represents three parallel daggers (‘misericordie’) on a red background probably referring to the three crossing streets.
Trevi is considered the most lay ‘Rione’ because it includes a number of churches smaller than the others; however most of them are of outstanding historical importance (S. Maria in Trivio, S. Maria in Via, S. Marcello al Corso…).

‘Rione’ Trevi includes some of the most famous of Rome’s sites like the Trevi Fountains, via Barberini, Quirinale hill, via XX Settembre, part of via del Corso.
This part of Rome was inhabited since the Roman Imperial period when it was a very vital area full of artisans and rich mansions. Aqua Virgo, a Roman Aqueduct built in 19 A.C., had its main spring just on the site of the famous ‘trivium.’ This water main remained active, thanks to maintenance work during all of the Middle Ages, allowing this area to be inhabited. It was completely restored in 1562.

During the Middle Ages, the ‘Rione’ became full of ‘ghibelline’ towers, symbols of the power of the most important families, and its history was strictly linked to those of the Colonna family who ruled for many years in this part of the city.

In the second half of the XVI century, the Pope decided to move his official residence to this ‘Rione’ in the Quirinale Palace and this gave a big incentive to all the commercial activities in the area, allowing the ‘Rione’ to become one of the most important and lively.

During this period it had very important inhabitants, one of them was Michelangelo Buonarroti who died here at a very old age (he was 89), alone and poor in a house (not existing anymore) in Macel de’ Servi next to Piazza Venezia. He was buried in SS. Apostoli church but his body was stolen during the night and brought to Florence.

After 1870, Trevi deeply changed its appearance owing to the demolition of many of its buildings and the construction of new streets: via del Tritone, via Barberini and the Umberto I Tunnel which links via del Tritone with via Nazionale. 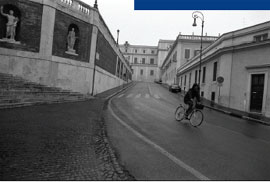 Today the heart of the ‘Rione’ coincides with the famous Trevi Fountain, one of Rome’s major landmarks, which is the destination for thousands of tourists coming from all over the world. Leaning against a side of Palazzo Poli it was realised, in 1751, in the place where the Aqua Virgo water main flew out. It replaced a previous fountain built in 1450 during one of the aqueduct’s restorations. The fountain represents a shell shaped cart pulled by two horses along the rocks in the driving ocean; the water coming out from the different mouths flows into a big tank. It’s a consolidated tradition for the tourists to throw a coin into the fountain wishing to come back to Rome one day. It has also been the set of one of the most important movie scenes ever shot; I’m speaking of Fellini’s ‘La Dolce Vita’ with an unforgettable Marcello Mastroianni and Anita Ekberg emerging from the fountain’s water.

On the top of Quirinale hill, not far from Trevi Fountain, stands Quirinale Palace. Since 1948 it is the official residence of the Italian Republic President. It was built in the second half of the XVI century as the Pope’s summer mansion, but very soon after it became the Pope’s official residence and starting in 1870 the Royal family inhabited it.

Not far from there, on via 4 Fontane, there’s a big gate hiding one of the most impressive Roman baroque palaces, Barberini Palace.  It was built in 1633, for the Barberini family, on a project made by the most famous architects of that period: Bernini, Borromini and Maderno. Nowadays it is the site of one of the sections of the Ancient Art Museum.

At the end of via 4 Fontane, there’s piazza Barberini; it was already inhabited during the Roman Imperial period, then it was enriched with gardens and villas during the XVI century. In the centre of the square there is the ‘Tritone’ Fountain one of the most famous of Bernini’s masterpieces commissioned in 1643 by Pope Urbano VIII. It represents 4 dolphins raising with their tails a shell above which a Triton is blowing on a ‘buccina’ (an ancient Roman musical instrument) making the water fall down. On the side of the square, nearly hidden, stands another of Bernini’s fountains (Bees Fountain). Made by the artist in 1644 as an homage to Pope Urbano VIII. It was put in this square in 1917.
Today the ‘Rione’ still maintains its commercial vocation; this can be clearly seen on via del Tritone and via del Corso which are full of shops selling every sort of thing.

The history of this street and its name is very complex. During Augusto’s period it was called via Lata; during the middle ages this name referred only to the piece from Campidoglio to Piazza Colonna, while the remaining part, reaching beyond Popolo’s Door, was called via Flaminia.

In the XVI century, during the carnival period, along this street horse races were held from Piazza del Popolo to the present piazza Venezia; from then the street was named via del Corso (from the Italian ‘corsa’ which means ‘race’). The races did not only include horses but also Jews (forced to run inside sackings), dwarfs, buffoons and donkeys, anything to amuse the people. Anyway, the most appreciated was the ‘Barberi’ horse race; a race among horses coming from Northern Africa and mostly belonging to the rich Roman families. The horses ran without jockeys in a very dangerous way. At the end of the street, big tents were placed in order to stop the race, and there the horse owners brought them back to the stables.

This carnival show was abolished in 1883 after a boy was run over by one of these horses during a race while Queen Margherita was watching.

Under Pio IX, in 1854, on the Epiphany, via del Corso was lighted for the first time with gas lamps. It was during that period that it became the place where all the nobles of the city went walking with their carriages. As a consequence many beautiful shops, jewellers and bookshops were opened.

In 1900, after the murder of king Umberto I (which happened in Monza), it was named ‘Corso Umberto I’, then in 1944, after Vittorio Emanuele II gave up his Royal rights, it was called ‘Corso del Popolo,’ but two years later it was renamed Via del Corso.

Nowadays it belongs to 4 different ‘Rioni’; only the left side (starting from piazza del Popolo) of the street, from the intersection with via delle Muratte to Piazza Venezia, belongs to ‘Rione Trevi’.