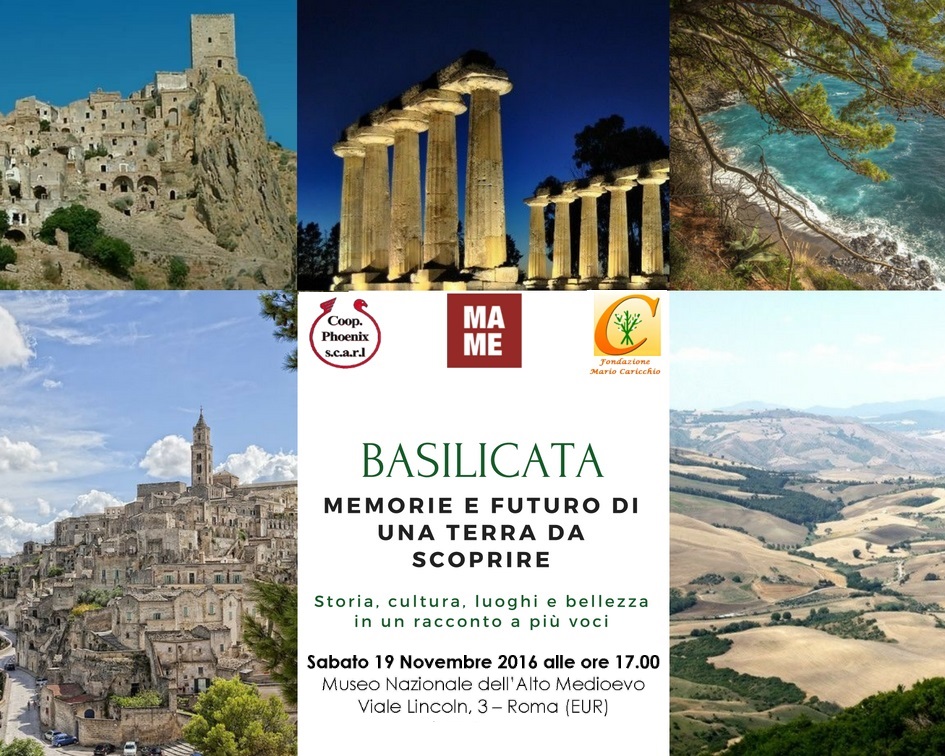 “Basilicata exists. … Yes … it’s a bit like the concept of God, you can believe it or not“. This symbolic phrase, taken from the movie “Basilicata coast to coast“, confirms that this region ist still scarcely known. A region still tied in the collective imaginary to the description wrote by Carlo Levi in his autobiographical book “Christ Stopped at Eboli” in which he reveals and denounces the neglect that marked for many centuries the history of this land and of its people.

“Christ has really stopped at Eboli, where the road and the train leave the Salerno coast and the sea, and reach into the desolate lands of Lucania. Christ never came here, nor the time, nor the individual soul, nor hope, nor the link between cause and effect, reason and History. Christ has not arrived, as had not arrived the Romans, who guarded the highways and never entered mountains and forests, nor the Greeks, who were blooming their civilization near the sea of Metaponto and Sybaris: none of the brave men of the European West has brought down here the sense of time moving, nor of state theocracy, nor the constant activity that grows on itself. No one touched this land if not in the role of a conqueror or an enemy or a visitor unaware of the true face and reality of this area”.

As a matter of fact, when Carlo Levi wrote of his exile in Aliano, it was really difficult to reach Basilicata; no trains, no highways, just old coaches populated by a humanity of carved faces, of archaic language and poultry kept in the arms.

A land border, of confinement, as it was for Levi and for many other dissidents. It is estimated that between confined and interned men in Basilicata – especially in the new province of Matera – passed through more than 5,000 people. Among the prominent personalities of culture and politics besides Carlo Levi, Eugenio Colorni, Guido Miglioli, Camilla Ravera, Manlio Rossi Doria.
But since Carlo Levi times to today something, indeed much, has changed. This proud land has gradually let itself discover, revealing to the world its charm made of great contrasts.

And we, of this Basilicata between memory and future, want to reveal several aspects in the conference to be held today, 19 November, in Rome at the National Museum of the Middle Ages with the title “ Basilicata: memories and future of a land to discover”.

There are three speeches that lead us to discover and explore the history, art, places and the beauty of this land: that of Edoardo Schina with “La Lucania between museums and archaeological parks”, that of Lorenzo Caricchio with “La Basilicata in history, literature and cinema “and finally that of Francesca Liani with “Basilicata exists. Journey to the discovery of a land of contrasts between emotions and amazement “.

The intent of the conference promoted by Mario Caricchio Foundation is to offer the opportunity to discover the treasures of a land that has so much to offer: history, art, culture, beauty, traditions and landscapes. A land characterized by strong contrasts lying between two seas, the Tyrrhenian and Ionian, for long time poor and marginal although rich in natural resources, from oil to water sources. An authentic land, hospitable and proud, with unique landscapes and ancient villages seeming to come from an undefined and magic time. A land with an ancient history, the cradle of Magna Grecia, a crossroads of peoples and civilizations, but also a land of conquest and domination of which the traces are still evident: from the Romans to the Lombards, Byzantines to Normans, Swabians to the AngevinsAragoneses to Bourbons. The land of Orazio, of Isabella Morra, a place of inspiration of the writer Carlo Levi, land of Briganti and great migrations. In short, a treasure chest that once opened, is not easily forgotten. This and many more subjects and aspects will be explained and described today by the three exceptional speakers.

Last but not least, indulge in some sin of gluttony with a convivial aperitif.