WHAT IS MAKER FAIRE
Maker Faire is the Greatest Show (and Tell) on Earth – a family-friendly showcase of invention, creativity and resourcefulness, and a celebration of the Maker Movement. It’s a place where people of all ages and backgrounds gather together to show what they are making, and share what they are learning.

Maker Faire originated in 2006 in the San Francisco Bay Area as a project of the editors of Make: magazine. It has since grown into a significant worldwide network of both flagship and independently-produced events.

Read more on Maker Faire history, the Maker Movement, as well as how to start a Maker Faire or a School Maker Faire where you live. 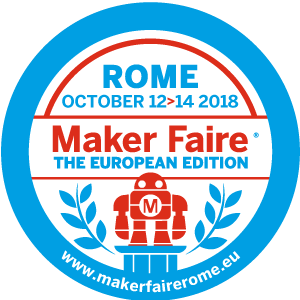 Maker Faire Rome is the European edition of Maker Faire. It’s organised by InnovaCamera, a Special Agency of the Rome Chamber of Commerce, whose mission is to place the city of Rome at the centre of the debate on innovation, by spreading the digital culture, and developing the individual and collective entrepreneurship that is so integral to the Maker movement’s genetic makeup.

Maker Faire Rome combines science, science fiction, technology, entertainment and business to create something totally new. It’s an event created to cater to curious participants of all ages, wishing to experience first-hand the makers’ inventions. Inventions that are the result of a desire to solve everyday problems, whether big or small.

Maker Faire Rome is an event designed to turn the spotlight on hundreds of projects from around the world that are able to catapult visitors into the future.

Not just a fair for field experts. At Maker Faire, you’ll find inventions in the field of science and technology (from 3D printers to wearables, through to drones, robots and digital manufacturing), but also new forms of art, entertainment, crafts, food experiments and attractions never seen before.

The watchwords of the Maker Faire Rome are: meeting, exchange, training, entertainment and interaction.
The public can experience and try their hand with these new inventions where innovation is made available to everyone. An experience where participants are an integral part of the fair itself.

An event for families, where children and adults can get involved in hundreds of fun and educational activities and demonstrations. A place where you can learn how to build your own smartphone, your own toys, “3D print” shoes, jewellery, handbags and even edible ravioli, or discover how to make your house home-automated with just a few simple measures.

Maker Faire Rome is the world’s largest exhibition after the “Bay Area” and “New York” in the US. 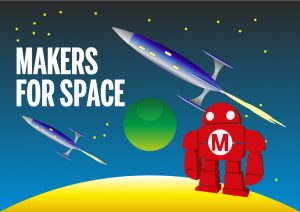 Brand new to the 6th edition of Maker Faire Rome is the area dedicated to Space.

It is realised by MFR in collaboration with the Italian section of the British Interplanetary Society, and the School of Aerospace Engineering of Rome Sapienza University.

Among the highlights of this area will be:

As another interactive activity, the BIS will also be offering three homebuilt spaceflight simulators which will let the public try their skills at flying both Apollo spacecraft (the CSM and the LM) as well as docking a Soyuz spacecraft with a space station. These simulators are yet another Makers implementation of more complex devices used for training pilot astronauts or for engineers to test their solutions.

The Makers for Space exhibition will celebrate two great triumphs in space technology history: the Apollo Program and the San Marco Project.

The very first crewed flight happened in October 1968, with the program culminating in July 1969 with the first human landing on the Moon. The core of the section will celebrate the Apollo Guidance Computer, one of the most important computers in history, and one of the most successful achievements of the entire Moon program.

The other section of the exhibition area will be devoted to Italy’s San Marco Project, that saw this Country’s first satellites and its launch infrastructure being developed at the same time as Apollo. In this section a full San Marco satellite will be displayed, as well as the fourth stage of the Scout rocket used to deliver the vehicles in that series into orbit. The public will be free to check the details of these vehicles to understand how they were built. Artefacts from the program will be also on display to understand the workmanship and the Makers attitude that characterised the development. The series of San Marco satellites provided critical and indispensable data on the tenuous traces of atmosphere that affects low Earth orbiting satellites. To complement this, the engineering model of the Tethered Satellite System, kindly provided by Thales Alenia Space Turin, will be displayed as an example of another unique and innovative satellite developed in Italy and flown on two Space Shuttle missions.