On Wednesday, October 11, 2017, accompanied by the best hopes, we enter the hall of the Teatro Vascello in Roma – the real not too crowded – waiting to attend the show “Scherzo for piano and stick”: a “dramatic dialogue for piano and stick“ as the press release anticipates. And continues: “In honor of the famous Osvaldo Cavandoli 1970s cartoon series, La Linea, My Theil Has performs with a wooden stick in this fast and meticulous physical performance realized and punctuated by Peter Oswald’s short poems”
In una scenografia minimalista ma suggestiva , composta da un pianoforte verticale e una serie di bastoni magistralmente sospesi e ondeggianti nel vuoto, appaiono i due protagonisti : l’eccelso pianista, anche compositore delle musiche che andremo ad ascoltare durante la serata , Nikola Kodjabashia,”>In a minimalistic but evocative set, composed of a vertical piano and a series of sticks that are masterfully hanging and swaying in the void, the two protagonists appear: the exalted pianist, also a composer of the music we will be listening to during the evening, Nikola Kodjabashia, and who seems to be a good gymnast with good reflections, Mia Theil Have the Danish artist, founder of Riotous Company with Nikola Kodjabashia, Luis Carvalho & Associates (https://twitter.com/riotouscompany) 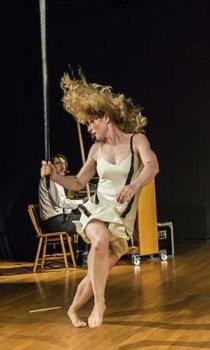 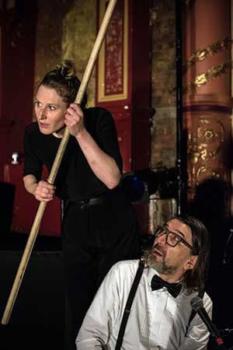 In his hands, at the rhythm of the music accompanying it, the “stick” becomes an antenna, then a broomstick, then a canoe paddle, then a flagship flagged moon and much more, in a crescendo of finds that want to surprise the audience .
E in effetti, in alcuni passaggi, la platea sembra gradire.”>And in fact, in some passages, the audience seems to like it. He smiles, amazes and likes. Le poesie di Oswald accompagnano la performance così come alcuni gradevoli momenti di canto e piccoli sketch tra la Theil Have e Kodjabashia.
“>Oswald’s poems accompany performance as well as some enjoyable moments of singing and small sketches between Theil Have and Kodjabashia.

“>The Cavandoli Line is resumed for a few seconds in one of the many “disguises” of that stick, which would then seem like the absolute star of the show.

Directed by Tage Larsen with co-directed by Mia Theil Have, drawing by Lyn Cunningham, designer Luis F. Carvalho.
Consigliato a chi ama il genere.”>Recommended to those who love the genre. 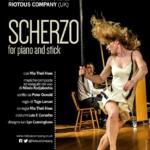 Riotus Company presented at the Teatro Vascello in Rome SCHERZO for piano and stick, the show of and with My Theil Have at the stage movement and dance and composing and performed live by Nikola Kodjabashia at the piano.