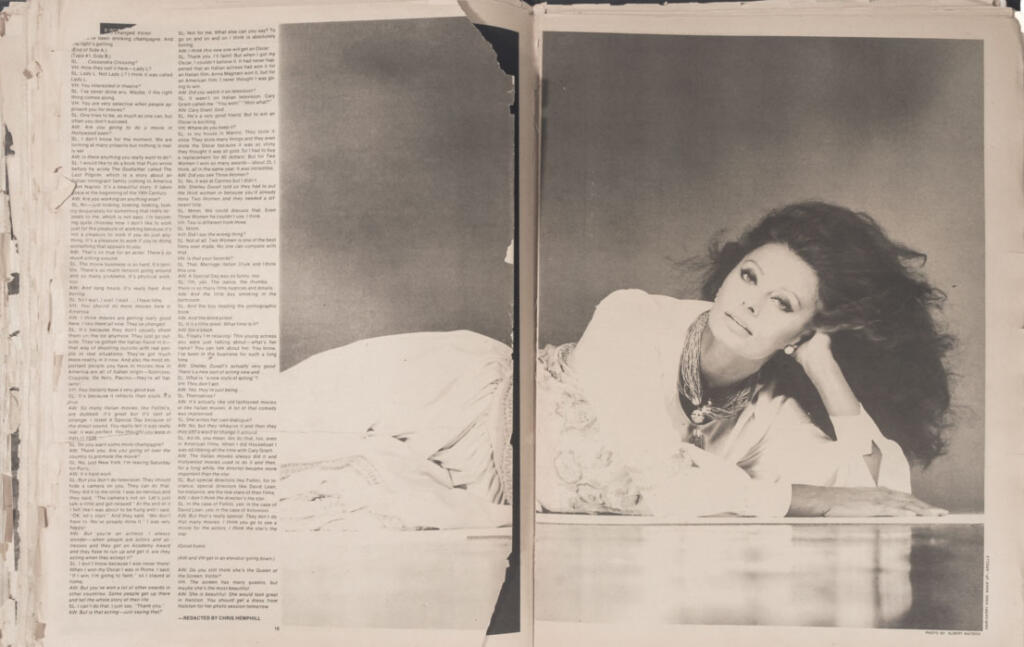 We learn from an interview by Andy Warhol and Victor Hugo with photographs by Albert Watson this story that is part of a collection that celebrates the best interviews of the Interview archives:

Sophia Loren receives Andy Warhol and Victor Hugo in her suite at the top of the Pierre, Fifth Avenue and 61st Street. Throughout the interview Sophia is sitting on a long chair with a beautiful view of Central Park behind her.

ANDY WARHOL: The director was very good. Who is he?

SOPHIA LOREN: Ettore Scola. He’s one of the three or four most important Italian directors in this particular moment. The first film he made – perhaps you know him here – was Drama of Jealousy (1970). And the last film he sold here was We All Loved Each Other So Much (1974).

WARHOL: I don’t remember that. Has it been released recently?

LOREN: Maybe a year ago.

LOREN: But this film has been very well received here by critics. I don’t know how it was marketed. It was dedicated to Vittorio de Sica and there were Marcello [Mastroianni], Fellini, Alberto Sordi, Anna Magnani, many actors.

HUGO: All the famous Italian actors.

LOREN: I wasn’t there. More champagne? But I’m not Italian, I’m Neapolitan. 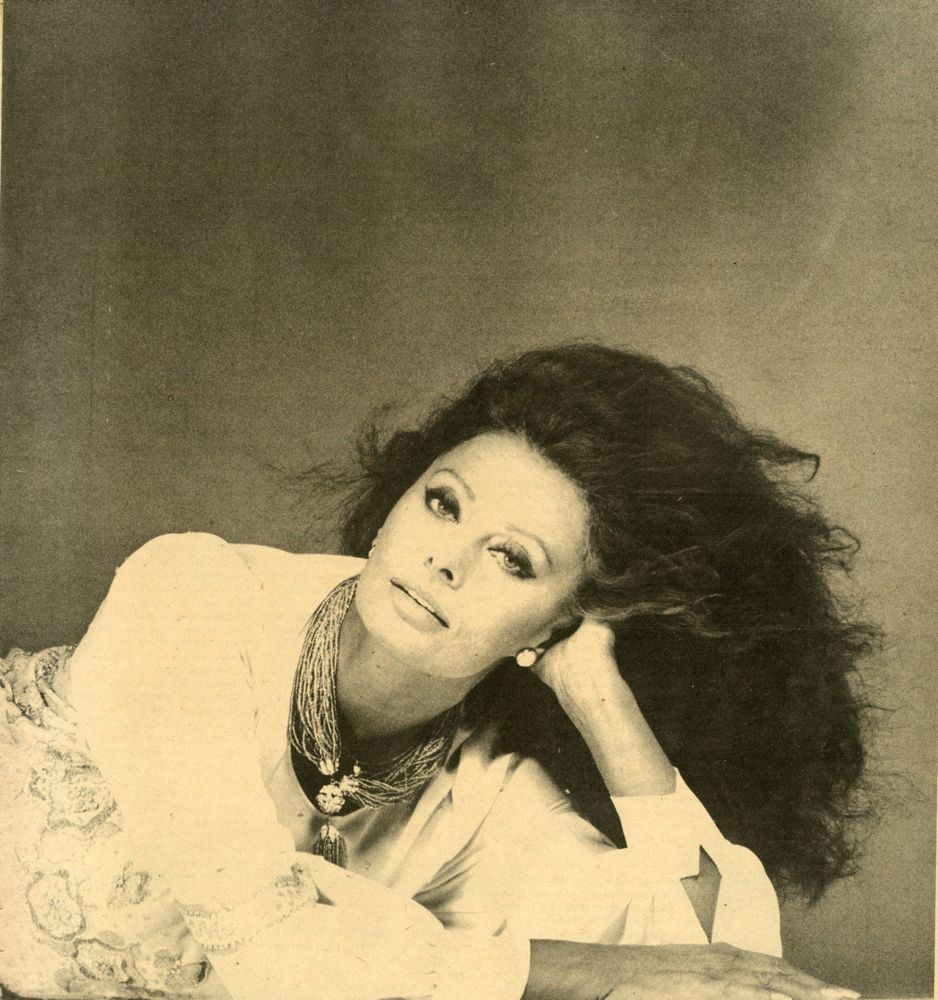 LOREN: Do you always keep this suite?

WARHOL: You think I’m a rich woman! I was invited here because I’m promoting the film, that’s all. Otherwise, I’d stay downtown.

HUGO:The center is more exciting. I liked the movie. I like it in Italian -A particular day.

WARHOL: Where was it shot?

LOREN: That’s because your life is a little more…

LOREN: Actually, we actually went around Via 21 Aprile, which were the buildings built during the Fascist period.

WARHOL: That was all fascinating: Hitler and all the gears and everything.

HUGO: I’m from Caracas, Venezuela, and I always like your films. There you’re the queen, like everywhere else.

LOREN: Whenever I hear that he makes me feel…

WARHOL: One of your favorite movies was the one with Tab Hunter.

That Kind of Woman (1959). You’re one of the few people who like it, but I liked the story a lot, and George Cukor liked it a lot too. I always remember when he saw her he called me from Los Angeles to tell me how much he liked it, but it was really a flop. It was a very touching story.

HUGO: In Yesterday, Today and Tomorrow (1963) you look very tall.

LOREN: Well, it depends where the camera is. But I’m very tall. I’m six feet tall and something and in high heels a lot taller.

HUGO: It also depends on your clothes. 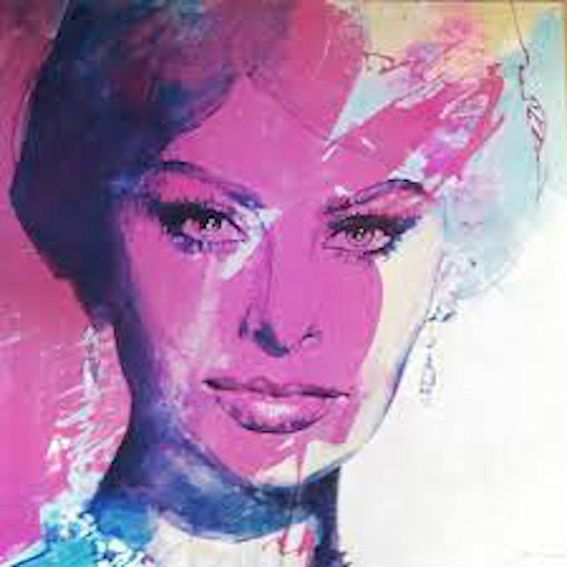 WARHOL: Oh, I had lunch with Valentino today, and he told me to give you a big kiss. I asked him if you were wearing Valentino, and he said, “No.”

LOREN: It’s too expensive for me! It’s very expensive. For clothes, especially evening gowns, you only wear them once, two or even three times, it’s ridiculous. I don’t need clothes. It’s not so important these days to wear so many clothes. It was about 15 years ago. Then I had to look different all the time. I don’t care anymore.

WARHOL: No, I think you should keep it that way. When you’re a big star…

LOREN:  Then you buy them for me, my dear, because they’re very, very expensive.

WARHOL: I know, but when you’re really special…

LOREN: Then you help me. But I don’t believe in being a star, anyway.

WARHOL: It’s not just being a star, it’s being special.

WARHOL: In fact, you were beautiful in Boy on the Dolphin in a rag. And you looked great in A Special Day too. 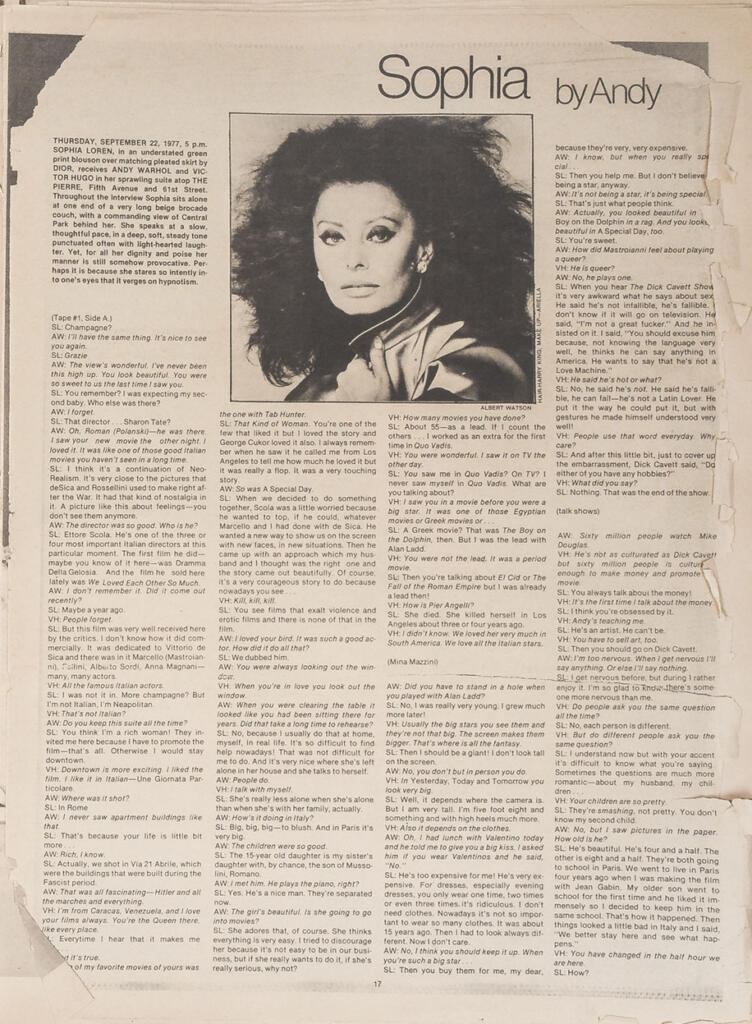 These are some of the many questions that Interview magazine publishes and that you can find in full (in English lingerie) on the Interview website:https://www.interviewmagazine.com/film/sophia-lauren-doesnt-believe-in-being-a-star-andy-warhol