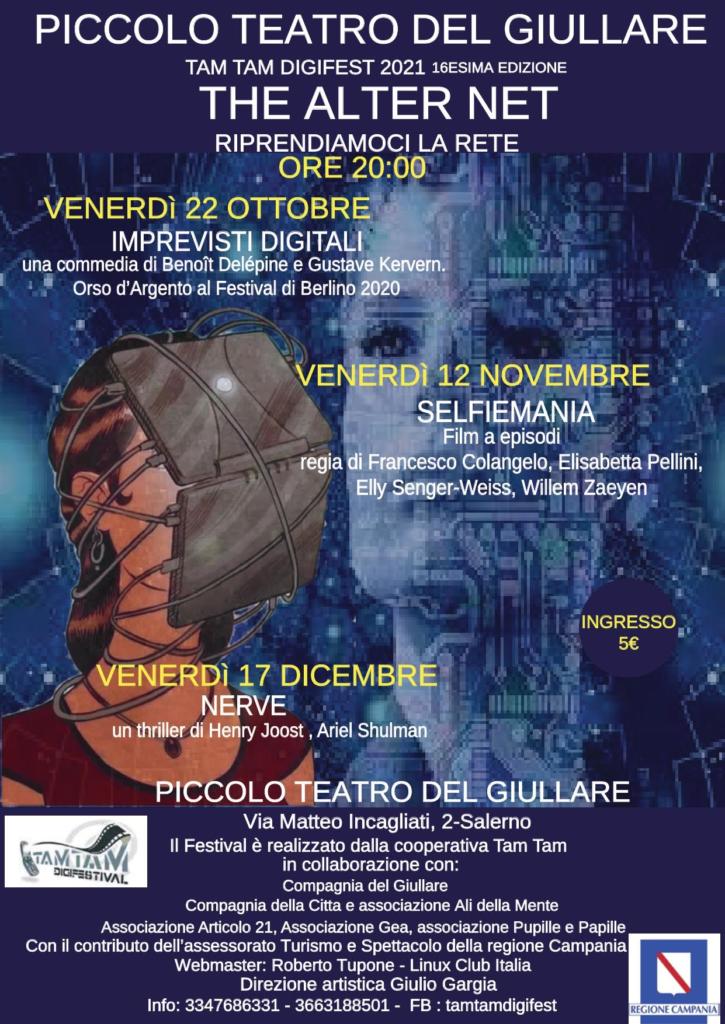 THE ALTER NET- let’s take back the Net

Friday 22 October 2021 at the Piccolo Teatro del Giullare in Salerno the Tam Tam Digifest screenings will resume. The theme of this edition is THE ALTER NET – let’s take back the Net.

Fake news, dark web, trolls, online executions, crackers and black hats, blue whale, theft of sensitive data, bitcoin scams. All the most disturbing news phenomena of recent years seem to be born and fed on the Net. The cinema is recounting all this, in various forms.

In this review we will tell about the dangerous deviations of the Net in the last 20 years and also look for ideas on how to correct them. In this session we will screen 2 very recent films, “Digital Impreveals”, a comedy that won the Silver Bear at the Berlin Film Festival 2020 and “Selfimania”, an episodic film with an international setting. Both are about the use and abuse of social networks and their consequences. On 17 December it will be the turn of “Nerve”, a thriller that anticipates the phenomenon of the blue whale, the online game that induces young people to take part in challenges that put their lives in danger.

The screening will take place at 8 p.m. in the Piccolo Teatro del Giullare, located in via Matteo Incagliati 2 in Salerno.

In a French provincial suburb, three middle-aged neighbours come to terms with their relationship with social media: Marie, who lives off her husband’s family allowance, doesn’t want her son to stumble across her sex tape on the net, for which she is being blackmailed by a younger man; the divorced Bertrand, who has fallen in love with a telephone operator, is in the middle of a never-ending bureaucratic-legal battle with Facebook to protect his daughter, a victim of cyberbullying; Christine, who lost her husband to binge watching, can’t figure out how to improve her Uber driver rating. Together, the three will join forces to wage war on the Internet giants.

Four stories that focus on one of the obsessions of contemporary society: the immoderate use of smartphones, an essential tool but one that can also cause serious problems…

Luca has decided to surprise his girlfriend Sarah during a trip to Austria. However, as he wanders through the beautiful forests of the area, the directions provided by the phone’s navigator are leading him away from his intended destination. Thus begins a war of nerves between Luca and technology. In an attempt to escape from an unforeseen situation, Sarah takes refuge in her beloved selfies before walking out on her boyfriend. Only after seeing her escape will he try to win her back like never before…

A young man has moved to Hollywood in search of the classic ‘American dream’. As if by magic and sheer coincidence, he meets his idol on the streets of America’s most famous neighbourhood, who will explain to him the true meaning of the American Dream in an age when appearance comes before substance.

Letizia, oppressed by the cumbersome presence of her husband after years of marriage, tries to escape the routine by opening a blog, entitled “Grandma Letizia Fusion”: it will deal with Japanese cuisine. But what at first appears to be an interesting diversion will turn into a worrying addiction: she will buy likes and followers, to try to increase her success, and she will disregard the expenses and, above all, the consequences. But she won’t be using her own money as much as her unsuspecting husband’s…

Iana is a Russian blogger. At a disco night she meets her compatriot Giorgi and is strongly attracted to him. She discovers that he is the lover of Caterina Mentana, a powerful Italian pharmaceutical entrepreneur. Iana, however, does not intend to stop: in order to conquer the man she is willing to start a battle against Caterina. Each with their own “weapons” and both on their own playing field, this unconventional challenge will see only one of them prevail…

Nerve
a 2016 film directed by Henry Joost and Ariel Schulman.

The film, which passed through Italian cinemas in 2017, is based on Jeanne Ryan’s novel of the same name published in 2012 and which in some ways anticipated the worrying Blue Whale phenomenon. The film sees the protagonist Emma Roberts, Julia Roberts’ niece, trying her hand at an online game in which participants are called upon to complete challenges, real missions that are increasingly dangerous and extreme, putting their own lives at risk. A thriller more topical than ever, capable of combining entertainment, reflection and thrills.