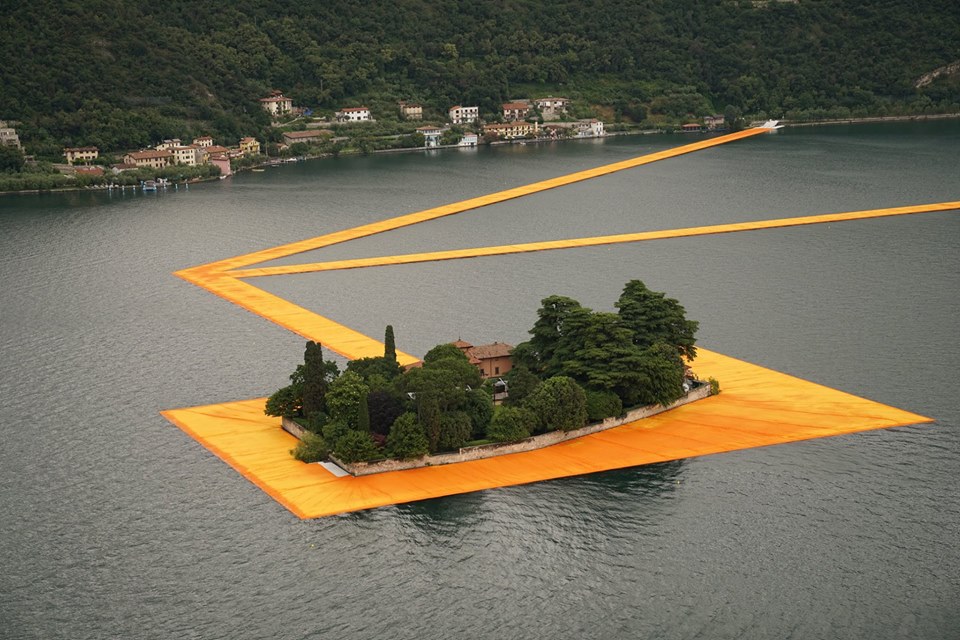 We speak of Culture in Italy, in this June in Rome quite confusing and time between elections that rages, one can’t fail to mention the great media event which takes us from Rome on Lake Iseo, a unique global advertising offer with the spectacular environmental with the installation by Christo and Jeanne-Claude: “the Floating Piers”. 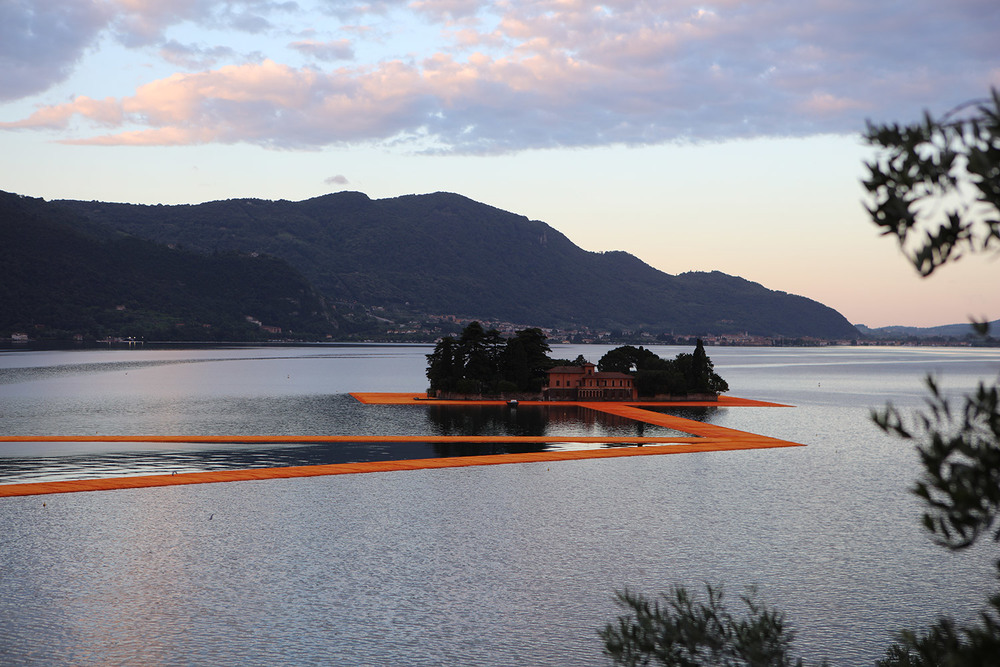 A temporary work from the ephemeral life desired by the artist who, like many others, goes beyond the traditional limits of painting, sculpture and architecture, is public art. The artist’s aim is, as always, to create spectacular works of art, unique, cheerful, carefree and totally free for visitors, such as this one now present in Italy.

It was in 1974 that we expected him to Italy after Rome with “Wrapped Roman Wall” the artist packed up a stretch of the Aurelian Walls and the Romans still remember it well.

Even the most unimaginable people, who do not follow the art world, now knows who is “Christo … what walks on water”! 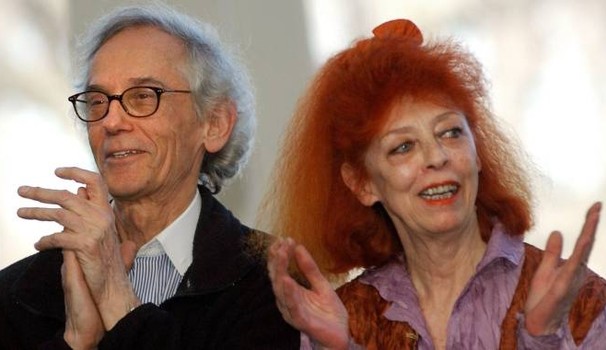 Christo and Jeanne-Claude, is a famous artistic duo in the world, two people but artistically unique. Already well known in the French-speaking world and in the USA where they have moved years ago, they’re among the major representatives of the Land-Art that intervene on the landscape and the change in their case provisionally. The Land-Art is a kind of contemporary art form in the US in 1967, is among the most complex and fascinating artistic experiments inspired by nature, so called Land- Art. Christo and Jeanne-Claude are famous to have made large-scale works and especially for works created by the fabric, “packing” monuments or stretching out long sheets in natural places.

In Italy, The Floating Piers, is a unique project of the floating docks of 3.5 km until 3 July 2016 on the small Lake Iseo. Born from an idea of both artists many years ago in the seventies and finally realized by the artist Christo, after the disappearance of his inseparable wife with whom he had thought it. Fifty years of life spent together, during which, when he was sour and unpleasant for her, she tried to be polite, and vice versa. Two people who liked to discuss heatedly. This work is like a gesture, a gift to his lovely half that continues to be present through their work. 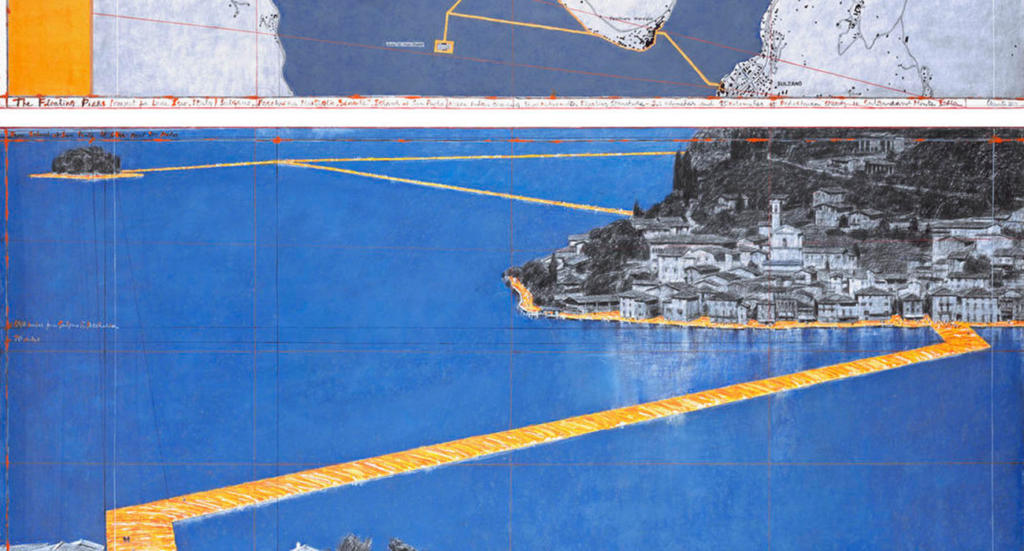 What exactly is and why a work of this kind?

The Floating Piers floating docks are formed by cubes of large and robust high-density polyethylene, which has commissioned Christo, following step by step in Pilzone in Denmark where the construction site. Many tests and trials have been made. These jetties create a waterside promenade and are covered by yellow ocher-colored fabric. The work is entirely made with the costs of the Artist, about 12 million euro. A top view of the first platforms that are assembled and then placed in a way that respects the trend of the currents of the lake. Christo explains: “Although he was born in a communist country like Bulgaria, after his flight to the West has always adopted a capitalist method in his work. All the material will be recycled or sold and nothing will remain of this work, which is absolutely not a means of connection between the mainland and Montisola.” Christo, always speaks in the plural as if Jeanne-Claude was still at his side. 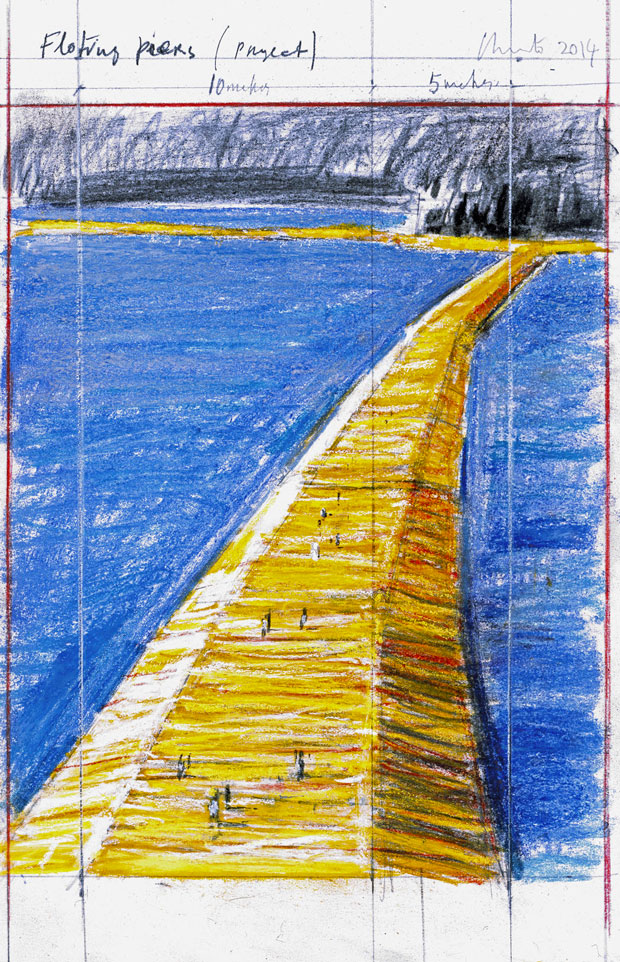 In The Floating Piers … it is the viewer part of the work itself. It is a huge and joyous installation, a unique example of land art, the size and madness they grab when you step on one. Walk on water, unique opportunity in life. What creates consensus worldwide today is the spectator and media attention. A great art project of a master of contemporary that will leave significant traces … begin to walk on the Floating Piers…

Christo and his wife Jeanne-Claude were both born June 13, 1935.

Christo Vladimirov Yavachev (Gabrovo June 13, 1935) and Jeanne-Claude Denat de Guillebon (Casablanca June 13, 1935 – New York November 18, 2009). Christ is the son of an entrepreneur and as secretary of the Academy of Fine Arts in Sofia (where he will study) has lived in Paris, where he arrived in 1958. Considered a stateless person, waive his Slav surname to use only his name with which it is He became famous. In 1958 they met with Jeanne-Claude in Paris, a unique encounter that only the fate might be able to find an explanation. There it remained until 1965 and then moved in a former industrial building in Manatthan-NY. In 1961 their first collaboration in the port of Cologne followed the following year in Paris their first monumental work: Rideau de Fer, an oil barrels wall to block rue Visconti, near the Seine, in protest the Berlin wall. On the artistic production of the artists, they have also influenced the thought and art of Man Ray and Joseph Beuys, with particular reference to the works Enigma of Isidore Ducasse the first and the second piano with Felt. 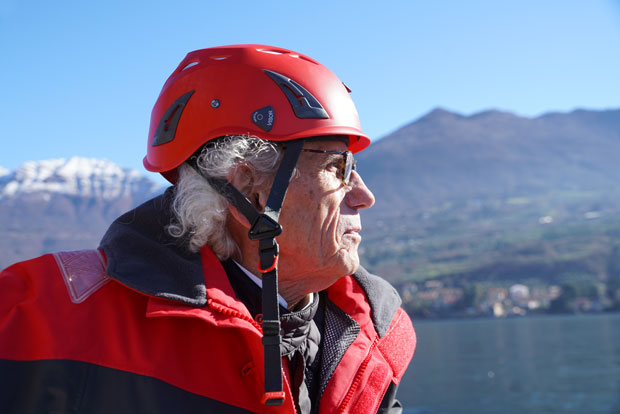 Christo is primarily the artist works, while Jeanne-Claude is the organizer. The works for the public are signed by Christo and Jeanne-Claude, drawings by Christo. Usually the works are fully financed by the sale of preparatory drawings, collages or models. After Jeanne-Claude died in 2009, Christo announces his desire to complete the works Over the River and Mastaba. Christo lives in New York SoHo neighborhood in the house that she shared for years with his partner. Since 1972 all their works are photographed exclusively by Wolfgang Volz; while at least five of their major work was also produced a documentary by Albert and David Maysles. 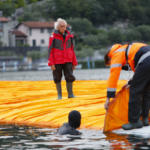 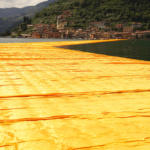 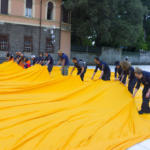 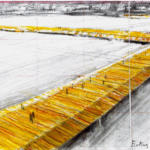 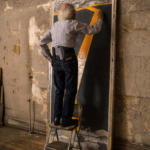 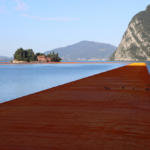 The Floating Piers is open to the public at no cost. 24 hours a day, also illuminated in the evening.

The Floating Piers, once on the walkway running from Sulzano, get used to floating, because it seems to stay in the boat, and if you’re on a sunny day attention to the reflection of golden fabric on the way. Stroll connecting Monte Isola private island of San Paolo, owned by the Beretta family. Really tiny little island, surrounded only by the float golden towel designed by Christo. A ride around the small island of San Paolo and at that point you are ready to take the last part of The Floating Piers, the one that will bring you a few hundred meters from Peschiera Maraglio and the first of the piers on which you will have transited to reach Montisola . Walking up to Peschiera Maraglio, on Montisola and from there once you arrive “on the ground” from the first stretch of Floating Piers might have two possibilities. Turn left, and go straight for the other two “arms” of The Floating Piers, or go for a nice walk to the summit of Mount. (The Floating Piers can also be seen from above on the way to the Sanctuary of the Madonna della Ceriola, exactly on top of Mount Island. There are several trails but the most fascinating is the old mule track that goes for about 600 meters in altitude and passes from Cure). You can try the sandwich with Montisola salami, a local delicacy. 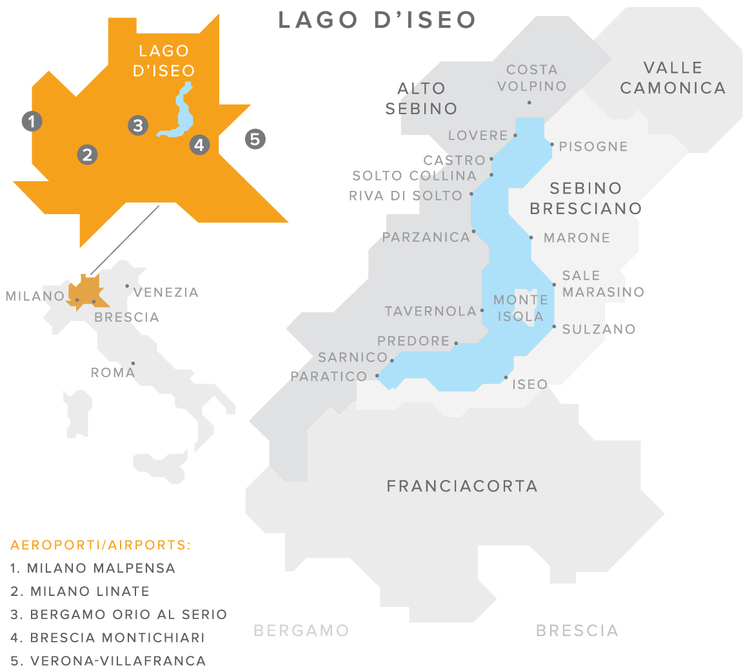 To get to Iseo Lake : from 5.30 to one and a half: 84 trains per day. These are the numbers of Trenord plan for The Floating Piers on the Brescia-Iseo-Edolo. The train is a candidate, then as the best way to reach the Bulgarian artist installation with special offers made available by Trenord.

They range from Trenord Day Pass (daily to reach Sulzano from across the region at a cost of 13 Euros), the Family day pass (valid for two adults and children up to 13 years at a cost of 26 €) and finally the Brescia ticket -Sulzano to 7 Euros.

By car from Milan – depending on the time in which you will leave – you have to take the Milano – Venezia, take the Ospitaletto exit and prepare a few kilometers of state roads. Then you can choose where to stop for leave your car, if the dear, last parking lot before Sulzano – costs 20 euro a day … – or one of the other, cheaper, and always with shuttles to take you from the parking lot to the dock float Sulzano, from where you will start your visit. In any case, find the app with maps of parks, complete with a PDF that shows you prices and times of the shuttles

2 comments to “The Floating Piers, Christo e Jeanne Claude. Trip of a lifetime where the viewer is part of the work himself”