In July, a generous press tour made possible to acknowledge and widely unveil certain active thermal waters just steps from the City, the Waters Albule in Tivoli. 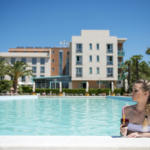 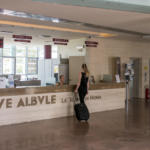 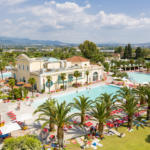 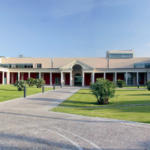 As carried on a train crossing not only landscapes also time and history, traveling in the millennias of Rome while discovering the importance and richness of this very spa resort at less than an hour’s journey from the Urbe, that finally includes those ancient baths we find ourselves in an Italian spa pole that, in the near future will be the pole spa center of Europe given the vastness and affluence of its water afflux and surface, its therapeutic qualities and in progress infrastructure.
The carbon-sulfur hypothermal springs -at a constant temperature of 23 degrees Celsius, therefore sulfur waters but not hot- Acque Albule, arising from two lakes, Regina and Colonnelle, retain the very name they received in antiquity: Acve Albule… from Latin albula = adjective, whitish. A true Augustan age myth, he himself believed the waters that flowed from these two lakes of the Roman countryside being divine, given their evident therapeutic and medicinal properties already mentioned by Virgilio in the Aeneid, when the Roman countryside was crowned by a yellow swamp crowned by seven peaks of the green hills ( i Sette Colli ), effective and able to heal all types of disease.
According to Plinio the Elder as reported .. “the wounded soldiers in battle were conducted to Acque Albule as in the best place of treatment, whence they returned recovered.” for their medicinal virtues in treatment of the diseases of the stomach, respiratory tract, sores and ulcers.

While Nero did merge these waters till the Domus Aurea using the Marcio Aqueduct, in the city it was recounted …. “How much more is evil Nero as excellent his spas…”, Emperor Adriano used them to nourish the many pools of his sumptuous villa.
Even Caesar Augustus, who suffered from gout, arthritis and rheumatism, liver issues, calcoli, suffering of nerves and exhaustion for his grueling work .., it is in these very waters that he found his full health back. Having enormously benefited from these sulfur baths where he was carried in a lettiga from Rome, named them “sanctissime” ( most holy ) and built a thermal building quite definitely imperial by Agrippa -the same of the Pantheon in Rome .., from which are still visible massive remains.

In the centuries, after the imperial era decadence, the baths were almost completely forgotten, looted, stripped of ornaments and raw materials, and fell into oblivion.
Much of this wealth of monuments, statues, columns, inscriptions, however, can still be visited at the Vatican Museums and at the Campidoglio, and in Palazzo Farnese.

Only then during Renaissance age, enlightened and educated lords, as only Reinessance could allow.., these waters were recalled and appreciated again to the point that, after having personally benefited given his poorly health, Cardinale Ippolito d’Este, he made recanalize and chemically analyze the waters, performing the first surveys in the two lakes dephts.
The Cardinale, of the powerful Famiglia d’Este, requested and obtained the Government of the City of Tivoli where he had The villa on the hills built, a known masterpiece of the Giardino all’Italiana renamed “The world’s most beautiful gardens “ now a UNESCO World Heritage Site, with its extreme concentration of fountains, nymphs, grottoes, hydraulic music, fountains.
Ippolito II. d’Este had is availed architect, painter and archaeologist, Pirro Ligorio, work on it, a disciple and rival to Michelangelo, around the mid of the XVI. century.
A century later the iconographic beauty of this architectural complex was gifted of the two hands of Bernini.

Effective waters and able to heal all sorts of sicknesses these Tiburtine waters .. “waters yielding almost resurrect from death to life“, are characterized by particular constituents such as sulfur, iron, and alum  -also fundamental constituents of the endemic travertine marble .., countless healing testimonies also promulgated through 1800 decades by the Accademia dei Lincei … “after only between fifteen to twenty hot baths …, also for inhalation in situ.”
Taking an accelerated panoramic at more recent times up to date, it is crucial, to indicate the direction sign of a Thermal Centre easily accessible from the Capital, renovated, newly refurbished and well-equipped with modern technologies also for all well-being paths: from the traditional spa medical care even in SSN Statal Health Convention, the 6.000 square meters of external water surface divided into four pools, two of which suitable for children, the others suitable for swimmers rather than to relax outdoors, than to add the the large indoors facilities as the Kneipp tubs, turkish bath, sauna, whirlpool, mud baths application, massages, high cosmetics treatments with advanced equipment -please refer to the web site for offer details :
www.termediroma.com
UBI THERMAE IBI SALUS
The Spa Centre is contoured by the comfortable Hotel Victoria (4 *) where you can stay and prolong the sojourn of benefital rest and treatments, rather than considering the choice and opportunity of a non-urban lodging during your vacation in Rome ! www.victoriatermehotel.it
Via Tiburtina Valeria km. 22,700 -00,011 TIVOLI TERME (RM)
tel. 0774 408500
info@termediroma.com

Daily admission: € 13.00 from Monday to Friday, € 17.00 on Saturdays and Sundays
You can rent changing huts and sun loungers, or unwind your towels on very green grass in shady stretches of vegetation and palms.
Children below m1.20 free entrance.

This Summer Wednesdays, a campaign to promote Terme di Roma to a wider audience, provides opportunity for non locals, time to cool off and relaxing at half-price for under 18 and seniors over 65 years of age for all outdoor spaces.

During the summer visit to Rome’s Terme you may consider visiting for the cool evenings al fresco:

www.villadestetivoli.info
Cool off, Regenerate at the Terme di Roma !

Daily admission: € 13.00 from Monday to Friday, € 17.00 on Saturdays and Sundays
You can rent changing huts and sun loungers, or unwind your towels on very green grass in shady stretches of vegetation and palms.
Children below m1.20 free entrance.

This Summer Wednesdays, a campaign to promote Terme di Roma to a wider audience, provides opportunity for non locals, time to cool off and relaxing at half-price for under 18 and seniors over 65 years of age for all outdoor spaces.

During the summer visit to Rome’s Terme you may consider visiting for the cool evenings al fresco:

2 comments to “TIVOLI, SALUS PER ACVUAM AT ANCIENT THERME”