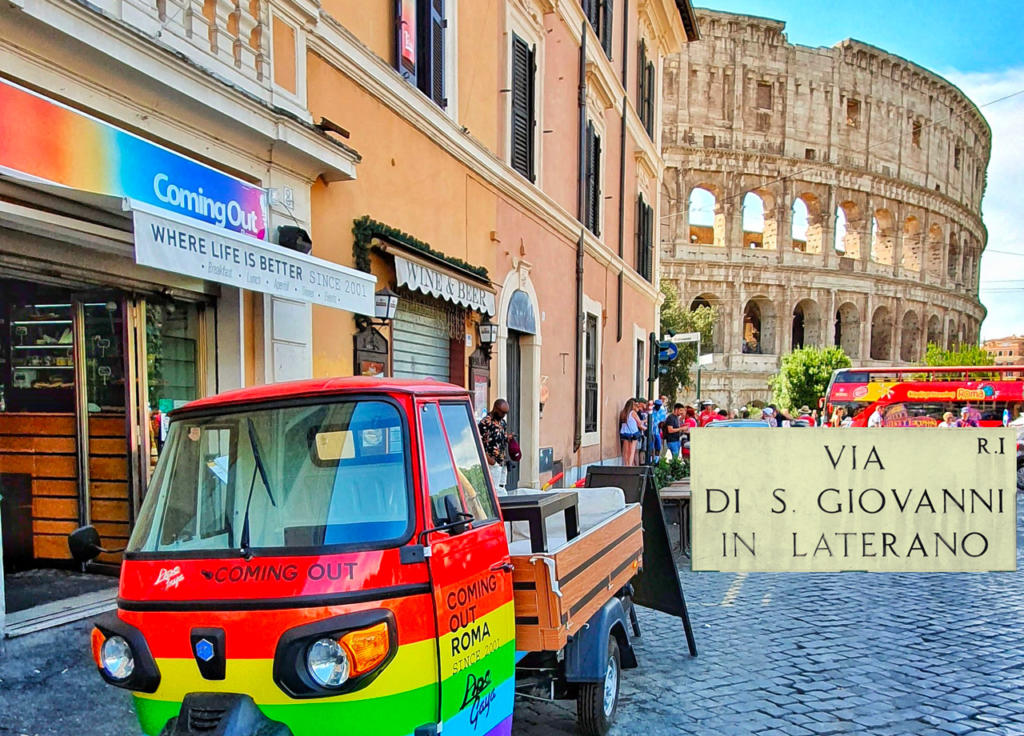 Walking the Piazza del Colosseo in the dim Roman evening, past the metro entrance to Colosseo B, you might see a man in a black fedora, grey hair peeking out from underneath it. He strums standard chords on a miniature electric and sings words with bit of rasp in his voice—a folk song in Italiano. If the stereotype holds true in regard to Italian music, it is just another sappy love tune, but hopefully one for the new millennium.

Up ahead, along Via di San Giovanni in Laterano in Laterano, a bar sign reads in bold white block letters, plastered on a bed of luminous rainbow stripes: Coming Out. Two words, both magnificently important, yet grandly cliché like Il Colosseo. 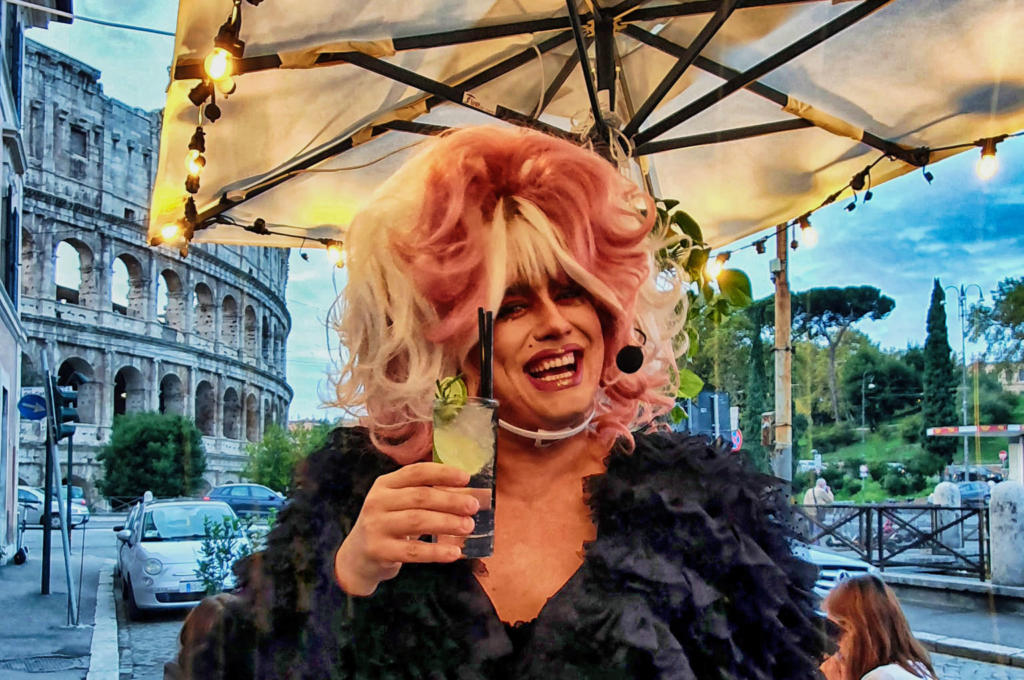 The roar of crowds can still be heard in the shadow of the Colosseum outside the bar on Venerdì and Sabato where men congregate on the cobblestone to chat, sip liquor, and maybe light-up a cigarette with a friend’s accendino.

A long railing and stone ledge skirt a section of the street across from the bar, carving a comfortable place to sit with a drink if you spot a place to squeeze-in amidst the peak volume of patrons around midnight. Behind the railing is a semi-deep pit with stall-like structures of crumbling stone contained within it.

“Gazing upon the ruins, I see. Why isn’t it so romantic?” the Italian boy beside me utters in a tone of irreverent sarcasm. Underneath his sport coat, a crazed Joker smiles on his graphic t-shirt.
“This is the pen,” he says looking down past the railing, “the gladiators train here, then go to preform over there.” 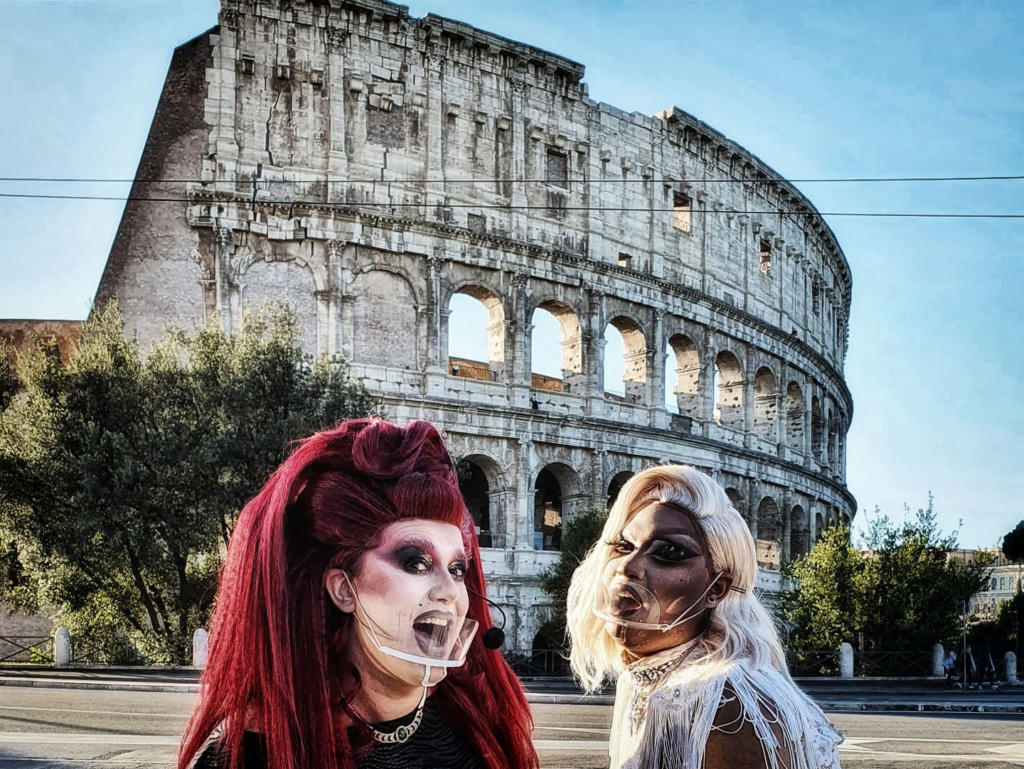 He asks me what I think of the Colosseum, and I proceed to ask his opinion of the structure. “What do I think of the Colosseo?” he exclaims, extending his hands outward in dismay, as if I have just asked an offensive question. “I hate the Colosseo! I would like to…blow it up!” he declares, bursting into a spell of manic laughter. (Later, I would discover from his friends on this street that he is notorious for becoming too invested in the characters he assumes in plays.)

They say, “all roads lead to Rome,” but Via di San Giovanni in Laterano is the only road that directly intersects Italy’s queer counterculture. In addition to bartenders, servers, baristas, and store managers, this street is where you are most likely to encounter some of central Italy’s best amateur singers, models, designers, and players (in both the theatrical and literal sense). Much like the feeling of sworded gladiators awaiting competition, the suspense is high beside these ruins as people flirt and mingle into the night. 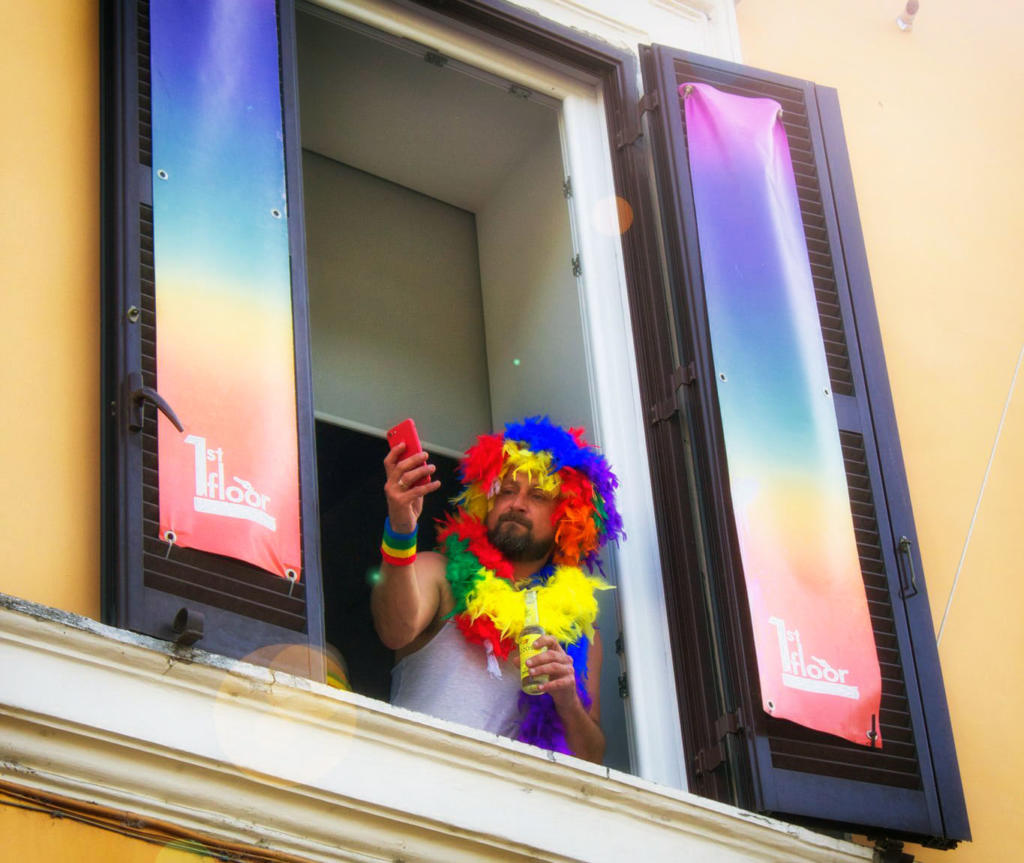 A parade of vendors usually streams down Via di San Giovanni in Laterano past Coming Out and My Bar next-door: An Indian man in stride intimately cradling a bushel of roses against his shoulder and a Senegalese woman pacing gracefully in a long yellow dress with a wooden box of rings balanced upon her head. After she slips a ring upon your finger, and if you successfully decline her advances and accessories, she will place the box back upon her head and stroll away to the following group, hoping that the next boy will blush with a sensation of beauty when he looks at his hand.

Peddlers promenade upon this street more often than others in Rome. They jostle jewelry and offer flowers into the faces of folks here more frequently, capitalizing on the naïve passions of the queer scene. A sale might appear more promising on Via di San Giovanni in Laterano where many of the patrons have a predisposition to pretty and pompous keepsakes. 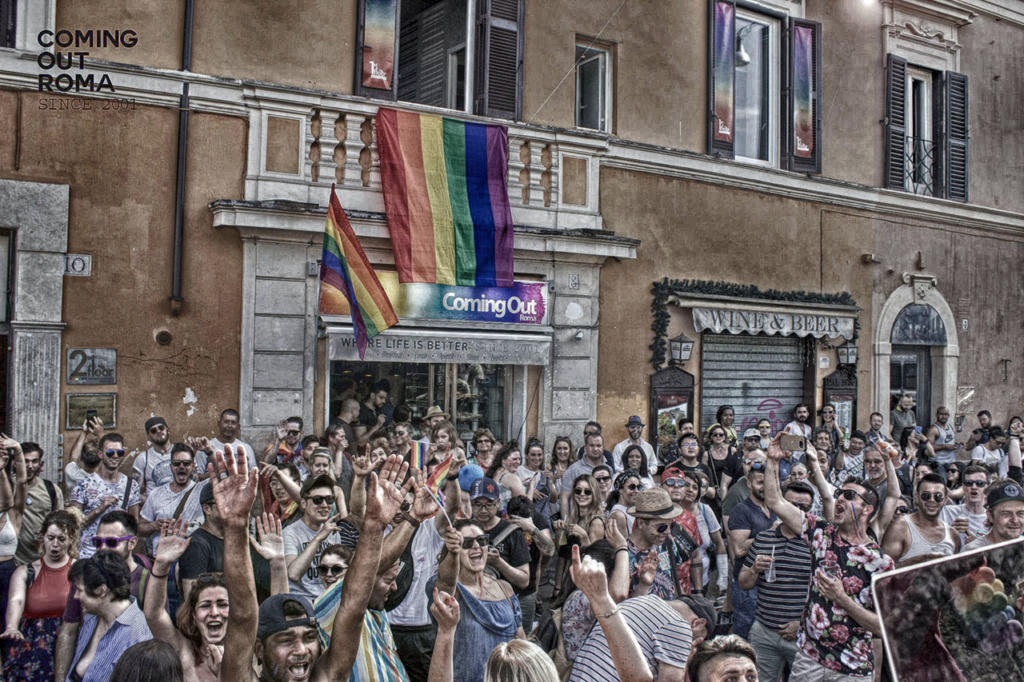 Like most pubs in the Western Hemisphere, Coming Out blasts American Top 40 on repeat, as tall, toned bartenders suavely pour liquor while almost busting out of their light blue collared shirts. The cool boys slick their hair back and dye it blond to look different in a country predominantly composed of natural brunettes. Karaoke night occurs once a week and proves to be one of the most interesting evenings, at least musically. Hearing Italian and American hits from the 70s to the 2000s sung with Mediterranean vocal-passion elevates the emotions of the evening, enhancing the nostalgic and enchanted atmosphere of this bar immersed in ancient scenery.

After one a.m., while waiting in the long line for the bar’s only bathroom, you could occupy your mind with something other than the thought of a full bladder by observing the portraits that line the hall. Queer men and woman, solo or with a partner in hand, look out from the wooden frames with golden halos upon their heads, like churchly icons (except without chastity).

A stocky woman in a black dress with a clunky, oversized red purse tucked firmly around her shoulder strolls toward the entrance of Coming Out. She starts to yell at a group of boys on the other side of the street and onlookers begin to laugh along. The beauty of her face is commanding—hazel eyes and stern chin, a large mole upon it concealed by creamy peach makeup. She enters the bar; her high heels clap on the white marble floor. She flings back a piece of light blonde hair draping across the side of her cheek and proceeds to exclaim
incomprehensible Italian into an unfortunate bystander’s face. The boys begin to laugh, and the bartenders observe in amusement.

Later in the night, I hear the whine of a whistle blowing repetitively amidst the crowds of Via di San Giovanni in Laterano, and I ask a Filipino boy next to me what is going on.

“Don’t worry, it’s a gay thing,” he says to me reassuringly, “that is just Claudia. She is the queen of this street.” With the Vatican just across the Tiber and a few kilometers upstream, I can imagine if there ever was an important fight here beside the gladiator training pen and the Colosseum, Claudia may have been one of the most acclaimed warriors, big purse and whistle in hand. She is the only person on Via di San Giovanni in Laterano who it is an honor to be insulted by.

I take a guzzle of my first Blue Angel and look up into the yellowish glow lighting the arches of the Colosseum. It becomes late. Too late. 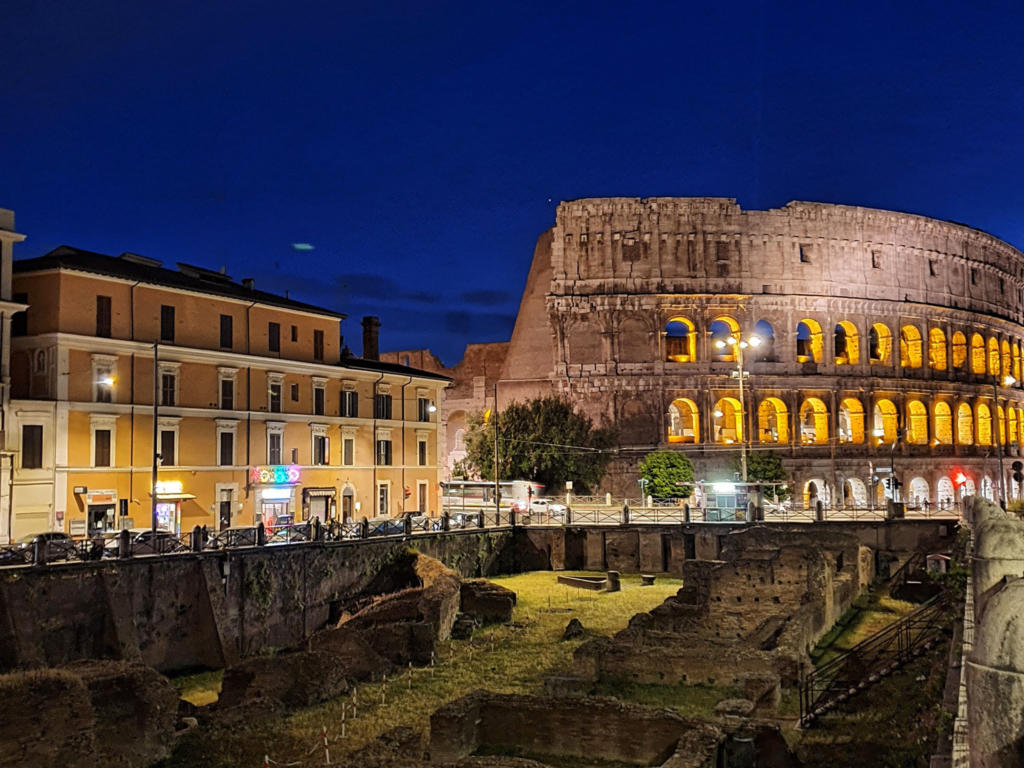 Three carabinieri pull up in their blue cars in the heat of the night past bar-close. The four bartenders blow out of the bar like a sudden change of breeze, hauling in the patio furniture. The sound system shuts off, ending “LoveGame” mid-song. The buff, tee-shirted Brazilian bouncer begins to shew people toward the door. My Bar, the older gay joint, flings down its metal garage door. The younger gays at Coming Out pull the handle seconds later.

The cobblestone of Via di San Giovanni in Laterano partially empties. The street cleaners sweep in. One man drives a red sweeping machine that looks like a small Zamboni, as another mans a thick turgid hose. He blasts water onto the street, creating a river of straws, plastic cups, cellophanes, and cigarette butts. Only a few remnants are slurped up by the red machine. The men do not have time to stop—Roma is eternal—there is always tomorrow to clean up the mess from yesterday’s party.

This city may no longer be the center of a civilization, but Via di San Giovanni in Laterano is likely to remain a major confluence of global queer culture for many more nights. Homegrown Italian nationals, Roman transplants from throughout the world, and holiday tourists from all hemispheres celebrate on this street beside the great ruin and rainbow sign. On Via di San Giovanni in Laterano, the pride of Rome is eternal. 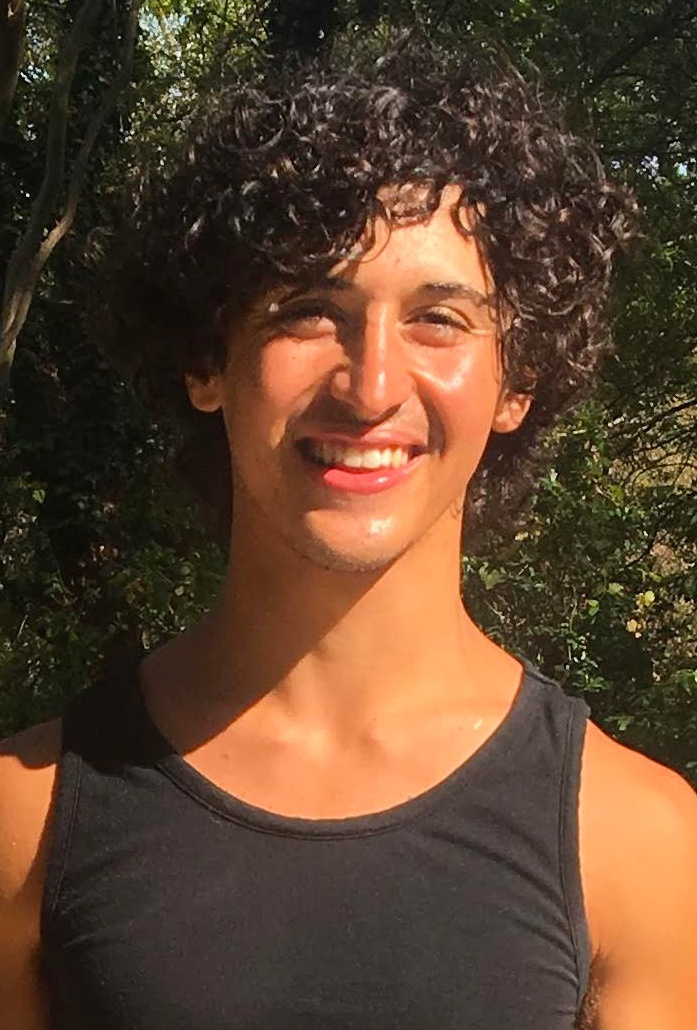 Joey Mancinelli was born in Milwaukee, Wisconsin in 1996. He studied at UW-Madison and John Cabot University. He is working on his first collection of poetry while traveling the southern United States. His poems are forthcoming (or have appeared) in Home is Where You Queer Your Heart, Camas, Proem, Rigorous, and Kind Writers.