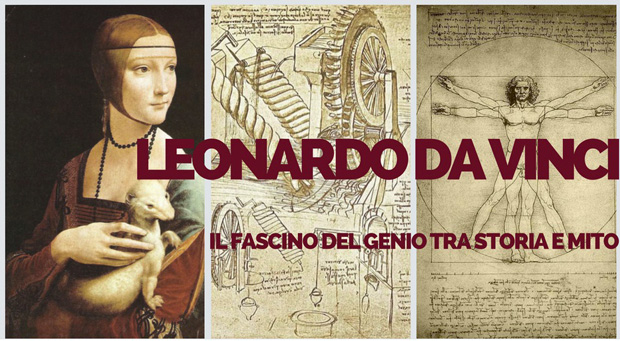 To face the figure of the Universal Genius is certainly not easy, the challenge is formidable and the difficulties are many: the risk to fall into the stereotype, to tell the already known, to reduce the innovative capacity of a Renaissance man named Leonardo Da Vinci.

But the organizers of the event to be held Sunday, 2016 Oct. 16 at the National Museum of the Middle Ages in Rome entitled “The fascination of genius between history and myth” have not benne scared by the challenge.

The intent of the conference is to offer ideas, suggestions and stimuli for reflection on the eclectic personality of Leonardo Da Vinci, artist, scientist, architect, inventor and much even more.

The event is characterized by an interdisciplinary approach and a method of operation centered on  storytelling. Through films and slides, readings and stories, the audience will be accompanied on a journey to discover the aspects of the genius of Leonardo Da Vinci by comparing two levels: the documented historical reality and the myth of the literary, cinematic, and esoteric sides. 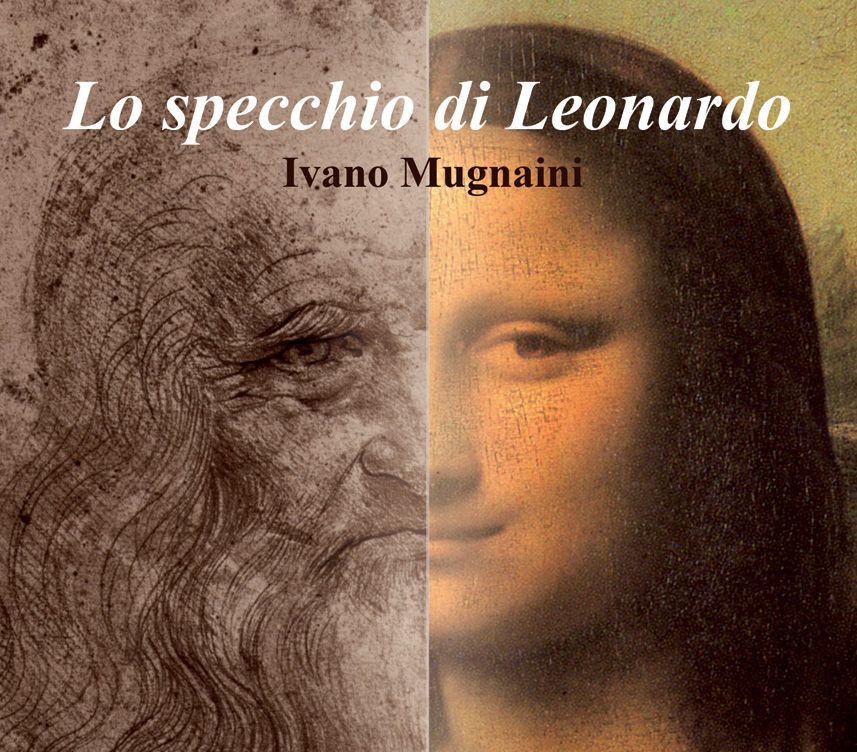 To develop these distinct interpretations we chose two exceptional mentors: Ivano Mugnaini author of the novel “The mirror of Leonardo” and Lorenzo Caricchio, expert lecturer in history.

I spoke with the two protagonists of the conference, and I asked them a few questions. We begin with Ivano Mugnaini.

Ivano, how did you get the idea of your novel which inspired the conference?

The title of the conference, “The charm of genius between history and myth”, provides a key and largely a response. The genius always attracts, for that diversity of background, never resolved, never due to preconceived ideas. It attracts and frightens. Precisely because it escapes the normal canons, or considered as such. The initial spark, as often happens, was tiny, apparently: I saw an old documentary film about the life of Leonardo which showed, among other things, his work with some mirrors, used for practical purposes. I though on the image reflected. I tried to imagine the relationship of an absolute genius with himself, with his legend, even then existing, fed by a real marketing operation, and, on the other hand, its reality, his weaknesses and desires more deeply authentic and human instincts.

The theme of the “double” in your novel is very exciting and at times the book takes on the pathos of a psycho-thriller. How did you develop the psychology of the characters? As much have youtaken from the biography of Leonardo and how much from autobiographical data?

Before starting to write the novel I have documented on historical and biographical texts and art history but also on the writings of Leonardo, that he himself wrote, with a linear language, no frills, though never without a certain poetic philosophical pragmatism. If I may say so, he noted, observed and transcribed speaking of himself, his world, his projects, of what he has created and produced. Interesting is also, at times, his humor: very serious, of course, but always suspended between the awareness of its means and a strange, complex and tormented form of humility, as when, for example, he calls itself ” man without letters “. As if to say “I know I’m ignorant, but in the meantime I gave form and life to my ideas, creating worlds that you do not even know how to dream.”

I imagined conflicts of the man with his past, its origins child rejected by his mother, with patrons whom he had to serve and who often were rude and ruthless men of power and war. I thought of hisdisagreements with his fellow artists, in the best cases envious and relentless, and advancing age and threatens to sever the projects still to be completed. Not least, I reflected on the struggle for excellence, the one with the world in and against him, despite the success. I have included some autobiographical data, to give sharper detail descriptions which, however, in essence belong to the story of the myth that I tried to tell.

The conference at the National Museum of the Middle Ages is a stop of the promotional tour of your novel that you are carrying around in Italy. What do you think is the added value that offers this type of event?

Yes, indeed, after Milan, Pisa and Caserta, I will be a guest in Rome and then go to Bologna. Roman milestone is significant for me for two reasons: first, because I find original and stimulating the dialogue and discussion with several voices, and then of course the location that will host the conference, which is the National Museum of the Middle Ages. I had the opportunity to visit it and I must say that is a small treasure of artistic and historical testimonies full of charm. The opportunity for all those who attend the conference can also be a visit to the museum. I think it’s an extra motivation. I take this opportunity to thank Edward Schina of Phoenix Cooperative for hospitality in this place of absolute value that is worth knowing.

Going back to the content of the conference, I find very interesting the “multidisciplinary” approach, long and complex word for a beautiful and essential concept: the taste of the look in the round, not only literary but also historical, artistic and film thanks to the interventions Lorenzo Caricchio and Francesca Liani. The views will meet, creating interactions, dialogue, respect, exchange. Under the shared taste for discovery, research, curiosity. All in tribute to those who have done those same “ingredients” the secret, the purpose and the goal of his life and of his myth, his legend and his reality.

Let’s move on to you Lorenzo. In the last two years you have devoted much activity as a lecturer. In addition to the historical conversation cycle entitled “The Wednesday of our history” you have lectured presentations of female historical figures including Lucrezia Borgia and Hypatia. From which parts of the elements do you begin to describe the biographies of these famous people?

Typically my attention to the “character” is mainly attracted from the historical geography in which he lived, because I believe that it affects enormously, so to speak, the “road” undertaken.  I will certainly not speak of “little known or unknown aspects” of the artist since about Leonardo was written about everything and more, and his life, his works and his thoughts gutted in all their aspects, to build, from its contemporaries to the present day, a myth, totally deserved with regard to the artist and the scientist, much less for matters relating to the aura of mystery, magic, the miraculous of which it was wrapped. So I will try to describe it for what I really think it was, that is one of the most exemplary members of his time as well as one of the greatest architects of that wonderful and unique (only attention from the artistic and cultural view) era that was the Italian Renaissance .

What fascinates you most of a figure like that of Leonardo da Vinci?

Since I myself am attracted by many interests (a bit like the men of the Renaissance), of Leonardo intrigues me the intellectual desire and thirst to know who has been able to express better than any other: to have ranged in all branches of knowledge, having foreseen the prodigious advance with the developments of science and so on; but also, like all men, having had its limitations and weaknesses: for example, the desire of perfection which prevented him from realizing many of his pictorial works and scientific projects; the ambition that led him to change his master with excessive nonchalance; the measureless love for flattery (a flatterer who liked to be flattered), money, luxury, etc.

What historical events have influenced the most the life and work of Leonardo da Vinci?

The period in which he lived Leonardo (1452-1519) has been full of events that changed the course of history by releasing the world until then known by the darkness of the Middle Ages and projecting it into the modern age: in particular two great historical processes and four events “epoch-making” (for all other cause and effect between them) have marked the end of the fifteenth and early sixteenth century: the Renaissance (particularly Italian) and the birth of the great national monarchies (Spain, France, England) on the one hand, the fall of Constantinople (1453), the discovery of America (1492) the beginning of the invasion of Italy by foreign powers (the horribili Italian wars to put it with Guicciardini), the beginning the Reformation (1517) on the other. From the historical point of view what we might call a “perfect storm” in which the concentration of facts is seldom found in other historical periods. Leonardo, however, for his attitude to flattery (it was still in good company) suffered the most, in his experiences and in his works, the Italian story based on them, by the Peace of Lodi (1454) which secured Italy a period of peace enabling the development and maturation of the Renaissance, the escape of Ludovico il Moro, his protector, in Austria when the French invaded Milan (1502), the events of the Medici in Florence (the Pazzi conspiracy, Savonarola, the death of Lorenzo the Magnificent, etc.).

Thank you again Ivano Mugnaini and Lorenzo Caricchio for multiple cues that, even with these few lines, were able to transmit.

I believe that we will all the ingredients to spend an interesting afternoon seeing not to a bombastic academic conference, but as a rich conversation of stimuli, of curiosity, of facets.

Thanks also to Edoardo Schina of CoopAcai Phoenix for the organization and the availability of the highly prestigious hall that will host the conference.

Certainly, as promoter of this event, the risk of being too involved is present, but I accept the challenge because on the interest that the conference will arouse I have no fear of being contradicted.

I wait you all on Sunday, 2016 October 16 at the National Museum of the Middle Ages in Rome in Via Lincoln 23, at 17:00 and I am and will be happy to receive your feedback.

francescaliani.blogspot.it/
One comment to “A journey to discover the man with a thousand talents: Leonardo da Vinci between history and myth”