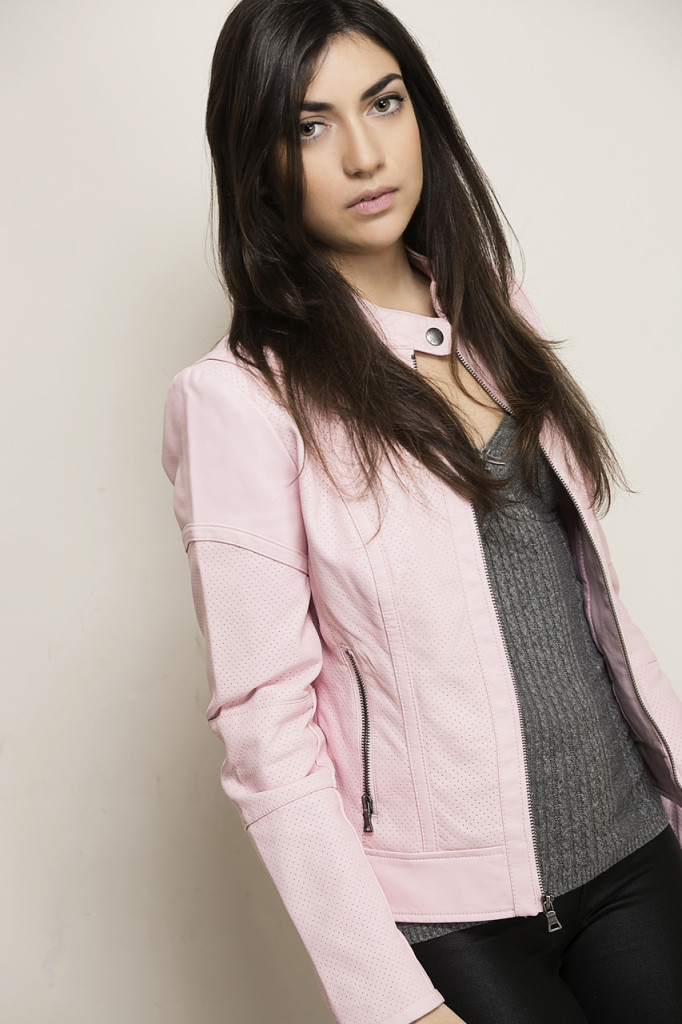 Today’s meeting is with a young roman filmmaker Vittoria Citerni of Siena , struggling with her latest project “Piccoli Crimini Coniugali” by Eric – Emmanuel Schmitt ” short in Rome at the Theater…

It was born during the last year of high school, after experiencing, for five years, theater and the world of short films. It has come from the need to tell and tell, to express myself, the desire to give life to the stories, to give voice to the characters, flesh and blood in a thin ink page. It all started with my first short film “5 MINUTES”, written and directed by me during the last year of high school. I realized that this was and would be my vocation, my way. It is a need that comes from within, that you can not explain. 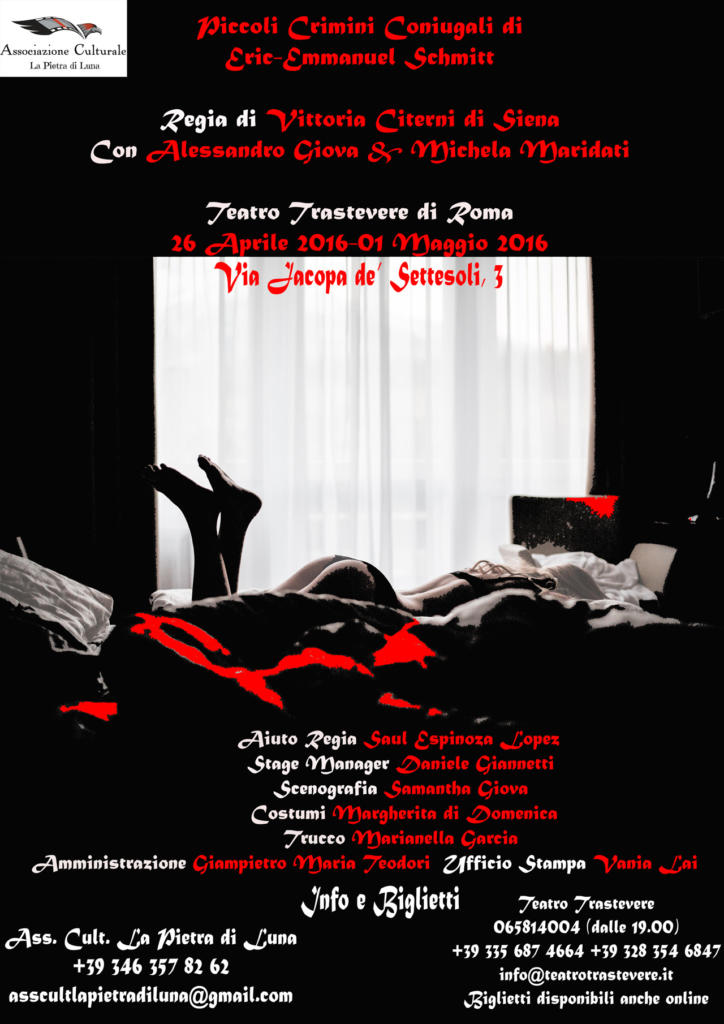 Small Crimes is a text that always struck me, fascinated by its crudeness, but at the same time by its sweetness. It is a reflection about love, about a couple’s relationship,and all relationships. Sometimes sharp, sometimes sweet , but also bitter, a bit like life. A courageous and important reflection on a subject that, sooner or later, touches all of us in our lives . A story that has the strength to go beyond the appearance of the couple, not only describing the process of falling in love,but also discovering,like a surgeon, what lies beyond . The story is about love: a love that is strong, but also a love that changes with the passing years. A love that bites and hurts, that scratches but at the same time is able to be gentle, to cradle and stand as King of feelings. A “small”, great black comedy that between tears and smiles, is able to tell a universal story: not the one of the first meeting, but the one of what comes after, of love that resists while it wears out over the years. But I do not tell you more, I wait for you in theater.

I try to be true to reality, in a story of this kind it is essential that the characters are real, that their relationship is true, that the public perceives the tension and attraction behind. It ‘s all set in a house, a lounge for accuracy. It must be said that in this kind of work, both writers and filmmakers try to use their emotions and feelings about what happens to them in real life when they write or produce a play or a movie,so that it’s easier for them to be near truth and reality. I would say that in this case is the essential condition.

Actually, I do not think there is an easy aspect of direction. The hardest part, but at the same time the most beautiful and the one that I involves me more, is working with actors, especially in a theater play,whnen you have more to be “on stage” and create a stronger bound with them rather than when you work in a movie,for time and cost issues. It is a work in which there are no easy aspects or shortcuts. It means working hard, always, putting your heart in every aspect of it. There are some directions easier than others, but direction in itself is never easy. 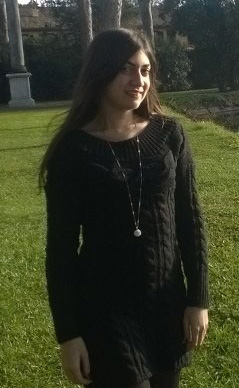 We were accepted on the bill more or less a year ago, so we’ve been working on it for quite a while. In this case also the production is mine, and this means that I have to work twice as much!. About rehearsals, although there are only two actors, we rehearse an average of eight hours a day. There are many anecdotes,each rehearsal is different, you feel different emotions. Unfortunately you have to see them…

Alessandro Giova had an audition with me more than a year ago, he was also in the cast of “The Dumb Waiter” by Pinter,that we put on stage last June at the Teatro Lo Spazio of Rome. We met by chance, through my production designer, Samantha Giova. One thing I like to remind is that we are a company composed by always the same people, at least on a technical level, although sometimes there are changes. Samantha told me she had a brother who was an actor, I told her to bring him to the audition, and I immediately liked him. Therefore I decided to confirm him also for “Small Crimes”. I met my other actress , Michela Maridati, for the first time in Rome last February ,when she was doing was auditions for a movie, “The Other Side of Destiny”, directed by Francesco Spagnolo, in which I was assistant director. We shot three weeks in Calabria together. At the end of her audition, she got the part and I asked her if she wanted to participate in the show, and she told me yes. This was one of the few cases where I did not have to make auditions to choose actors.

An analysis about a couple’s life, about love that changes and resists to the passage of time. Schmitt is a perfect score, where each measure helps to create a symphony with no mistakes.

Definitely a conjugal thriller ,even if I do not call it surreal, because I find it extremely realistic, perhaps too much in some ways. After all, every love story, has within it an aura of mystery, magic, which helps to keep it going.

Yes, the so-called calm after the storm. To answer you I can mention the author of the text: “Small Marital Crimes had violent adhesion from the public.At theater exit the couples responded differently depending on their age. The twenties were telling me: “You are cruel”; the forties: “What realism”; the sixties: “What tenderness.” They were all right; at 20 you would want that love were easy, at 40 it turns out that it is complicated,at 60 we know that it’s nice because it’s complicated. “I hope that with us the public reacts in the same way.

We’d like to bring the show in some bigger theater for next season,together with “The Dumb Waiter” and “Harry, Sally and I,” as well as make it in unconventional spaces and take it on tour in Italy. I also wrote ,together with my fellow actor Matt Bartoli ,the screenplay for a feature film that I would like to be my first direction in movies and it seems that things are slowly, fortunately moving. I should be in some films as assistant director during the summer, now let’s see what happens. We are also waiting for the results of certain calls, such as CROSS Award and the MOFILM Contest of POLO,in which with our video we got to the final. There’s also another possibility about theater direction and then, if nothing else comes up, the well-deserved summer break. We have so many other projects that we are trying to achieve gradually, even through my cultural association “The Moonstone”, engaged now with me in the production of “Small Marital Crimes”, such as a concert in the Church of the Artists in Piazza del Popolo on May 8th with the choir directed by Maestro Federico Incitti, to which I also participate as a chorister, to which we granted the patronage.

In a word? Disastrous. But this is a something that can even help young people and those who really want to roll up their sleeves and work hard. Crises can implement changes and reversals. Just have courage. And my team and I, we really have it,we are not afraid to work hard to reach what we want. I travel a lot for work, even abroad, but my home is, at least for now, Italy.

Well,maybe: why do you do it? My answer is simple: my heart tells me.

” at 20 you would like that love was easy, at 40 it turns out that it is complicated, at 60 we know that it’s nice because it’s complicated.”

Eric-Emmanuel Schmitt writes with grace and freshness, playing cheerfully with much metatheatre as strenuous with objects such as truth, guilt and love. Small marital crimes is a little gem that details the necessary sinking in hell of Lisa and Gilles in an attempt to re-emerge to serenity as a couple.

Eric-Emmanuel Schmitt is the author of short stories, novels and plays translated and performed all over the world and is considered one of the most successful authors in contemporary French drama.