Within the Eastern Estates, from September 15 to 24, Urban Experience will lead six walkabouts with Aperossa, the project promoted by Aamod (Audiovisual Archive of the Workers’ and Democrats), aiming to revive the threads of the collective memory of the Romans, digging into the past of historic districts, such as Ostiense, Testaccio and San Paolo.

But what is a walkabout?
Walkabout means “walking around with a theme“: it is a performing media format in which peripatetic conversations combine with nomadic radio transmissions, for a participatory exploration.
A fundamental suggestion is in that English word that refers to the ritual trip that aboriginal Australians undertake walking through the outbacks of the outback, the more remote internal areas that extend into the semi-desert bushes. The term was coined by Australian white landowners to refer to Aborigines who disappeared from their property, and referred to as “gone walkabout” (walkabout). When it was revived by Bruce Chatwin in “La via dei canti”, that word struck in an extraordinary way, engaging in the situationalist psycho-psychological sensibility already put in place, in the 1977 Movement in Rome, with metropolitan Indians.

Urban Experience plays with this definition by associating it with “talkabout”, thus relaunching urban explorations that combine simple things such as walks and conversations with the unprecedented complexities of the Performing Media-storytelling in which the participatory narrative is inscribed in the ” increased “by the use of radio and web media.
These nomadic conversations featuring smartphones and headphones connected to a radio whisper allow you to listen to the voices of walking-talking heads and audio repertoires in a radio stream that is often streamed via webradio and georeferenced .
This is a performance media format, conceived as an “active citizenship gym” in which it is conversed “side by side” while looking around, “learning everywhere” to activate participatory eye labs and psycho-geographic explorations.
Poetics and politics of urban resilience, through the performing media of whisper-radio and smartphone to trace experiential maps, with feet to the ground and head in the cloud.

Details of the six walkabouts with the Aperossa in Ostiense, Testaccio and San Paolo 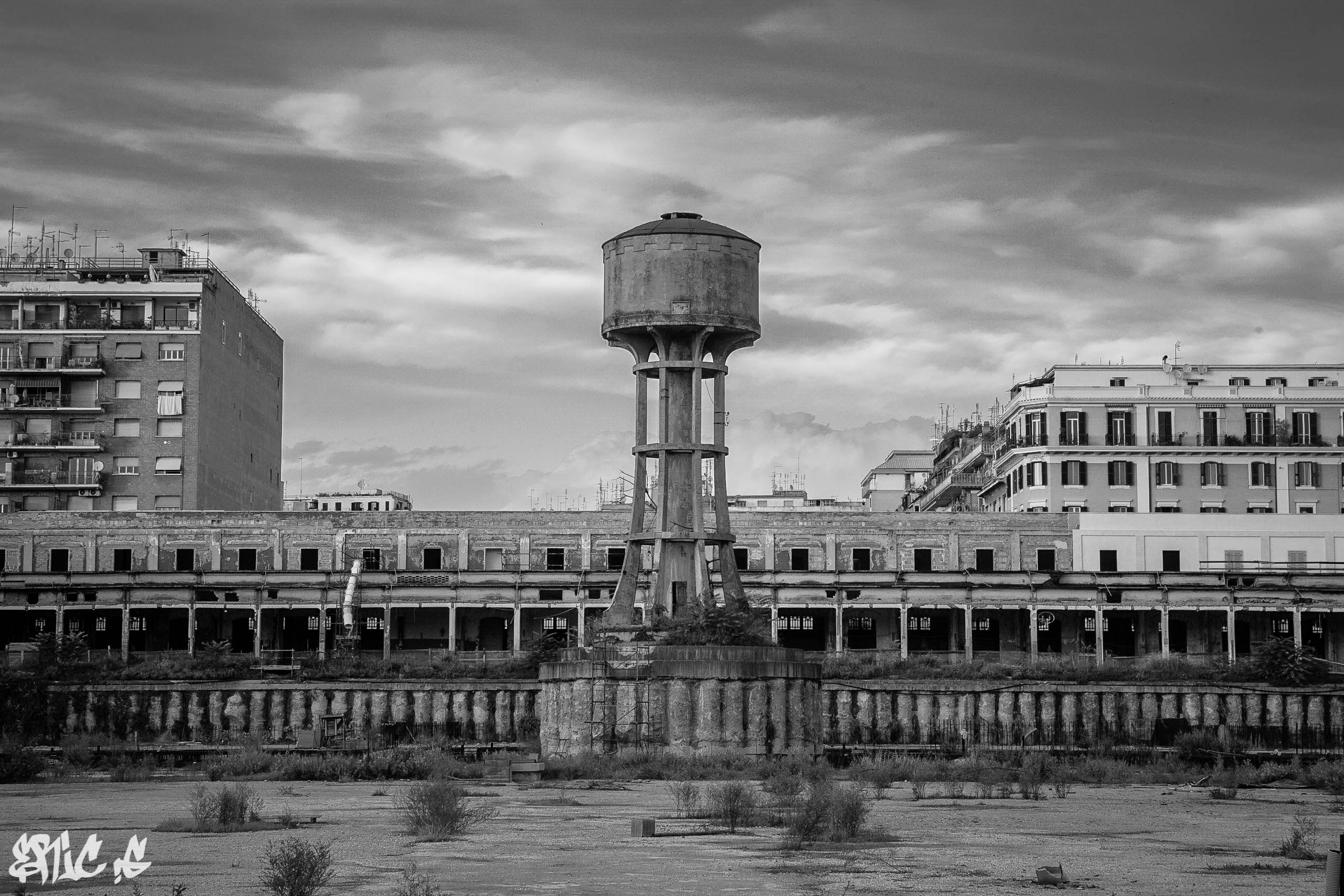 The exploration of Ex Mercati is a rare opportunity for those who are questioning urban regeneration. These General Markets were born with Sanjust’s planning (1909), wanted by Mayor Nathan, who structured the area according to precise urban planning. The re-use of “Ex-Markets” triggers a process of enhancement (signed by Rem Koolhas) of urban areas that have lost identity to develop new metropolitan quality. We will accompany the architect Raffaele Giannitelli, engaged in that yard that now appears as a crater capable of being a driver of territorial innovation, with services, multisale, mediatech, student and other receptions.

Saturday, September 16, 2017, at 6pm, walkabout “Loss of sense and sense of gaps: in the nomansland of the Ostiense shore”

We will cross the great fascinating hollows of the former industrial area on the Ostiense del Tevere shore between the “urban amnesia” of the Miradoran abandonment, just a few meters from the regenerated area of the same complex with the Stable Institution in Rome. Revealing History and Stories, assembling fragments of geographies, crossing networks and gates, now totemic figures in the abandonment of so many areas. We have already done so through the “nomadic shipyards” already made with the walkabouts of the project Vuoti di senso_ Senso dei vuoti  .

An urban exploration of the neighborhood, to tell its stories, like the legendary “Garbata Ostella” (a mythical innkeeper famous for its loving welcome), entering the barges of this extraordinary urban complex, known for its eclectic architecture. It will be a chance to make a nomadic conversation on the theme of urban gardens (precisely in this area famous for its vineyards, so much so that its place name seems to come from “garbata”, a method to grow vines on the elms of this borough-garden). We will listen to radio fragments of the film “A Violent Life” (1962) from the same novel by Pasolini (1959) and the voice of Victor Cavallo, Garbatella’s aide, an extraordinary onemanshow of the theatrical avant-garde roman, prematurely disappeared.

By wandering the Basilica of St. Paul outside the walls, we will listen to the voice of Dom Franzoni, who has recently disappeared, who was abdicated for 10 years. In 1974 he took open positions for the freedom of vote of Catholics in the divorce referendum, pointing out that marriage could not to be a sacrament for non-Catholics. Strong criticisms of ecclesiastical hierarchies followed the imposition of “divinis” suspension. On 2 August 1976, after his declared support for the PCI during the election campaign, he was resigned from the clerical state. We will then enter the heart of the Sao Paulo district, exploring the monumental former ATAC depot and the old Volpi trattoria (also called Casale Garibaldi) where the Uttopia City is headquartered by the International Civil Service. The story of that trattoria is emblematic: Augusto Volpi, an enlightened, anarchist, and anti-fascist entrepreneur had opened an inn in this farmhouse, which in the years following World War I was a meeting place for antifascists in the neighborhood and even a small brigade of Partisans during World War II.

A reconnaissance in the urban memory of Testaccio, following the paths of taste at the landing point, the ancient Emporium, the food for the city, between genius loci and food experience. It is basically a look at the history of the neighborhood and its origins with L’Emporium of Roman origin, a landing place for the produce of ancient Rome. Testaccio was the last district in the historic center of Rome after the Unity of Italy of 1870 to be built ex novo because it was the only free area and above all it possessed of gold-geographic characteristics suitable to accommodate the nascent class working. We will listen by radio fragments of films inspired by “The History” by Elsa Morante who lived in that neighborhood and will talk about food, in particular, of the “fifth quarter” that extreme gastronomic value expressed by the extra-unity of the offal, a food emblem of the ward that has welcomed the most cutting-edge tile in Europe.

The route follows the ancient trails that cross the vineyards in the Aventine plain between the Tiber and the Monte dei Cocci. Loci genius is made by the wisdom of places and cultures, as well as the crops, which expound it, starting from the vineyards. From the value of the terroir for wine to the cellars’ ecosystems for the seasonings up to the metropolitan mood that through the movida that redesigns an urban scenario made by the human geographies of metropolitan flows. It will then come to the Mount of Cocci, where there is still an old wine cellar with old barrels and concrete cisterns for the wine between the thickening of the premises. You will enter the “belly” of the Mount where the system of ancient rocks, accumulated and placed in art for centuries, from the remains of broken amphora, downloaded to the empire created “vespai” that create an incredible air conditioning.

Carlo Infante is President and Managing Director of Urban Experience, opinion leader and freelance professor of Performing Media in universities, academies, other education, and training centers where the trend is to interpret innovation through the social and cultural use of the new media. In the 1980s, he directed important festivals such as “Scenari dell’Immateriale”, he was anchor (and author) of different radio programs on Radio1 and Radio3, as well as TV anchorman of “Mediamente.scuola” on RAI3 and “Salva con Nome” on RAInews24 (in 2009). On the occasion of the Turin Olympic Games in 2006, he created web formats – such as “geoblog” (which allowed to write histories on geographies far ahead of GoogleMaps) – which express the creativity tensions of social innovation on the ground (e.g. on the occasion of Performing Media Lab in Salento, “La Notte della Taranta”, and in Piedmont within “Bene Confiscato alle Mafie”). He has also been in charge of a wide variety of projects on cultural and anthropological shifts brought about by the evolution of technology. He is author of “Educare on line” (1997, Netbook), “Imparare giocando” (Bollati Boringhieri, 2000), Edutainment (Coop Italia, 2003), “Performing Media. La nuova spettacolarità della comunicazione interattiva e mobile” (Novecentolibri, 2004), “Performing Media 1.1 Politica e poetica delle reti” (Memori, 2006) and many other essays and articles for different magazines and newspapers (including recently for NOVA-Sole24ore, Tiscali and L’Unità for the monthly UniTag). He is among the promoters of the “Stati Generali dell’Innovazione” (The States-General of Innovation).