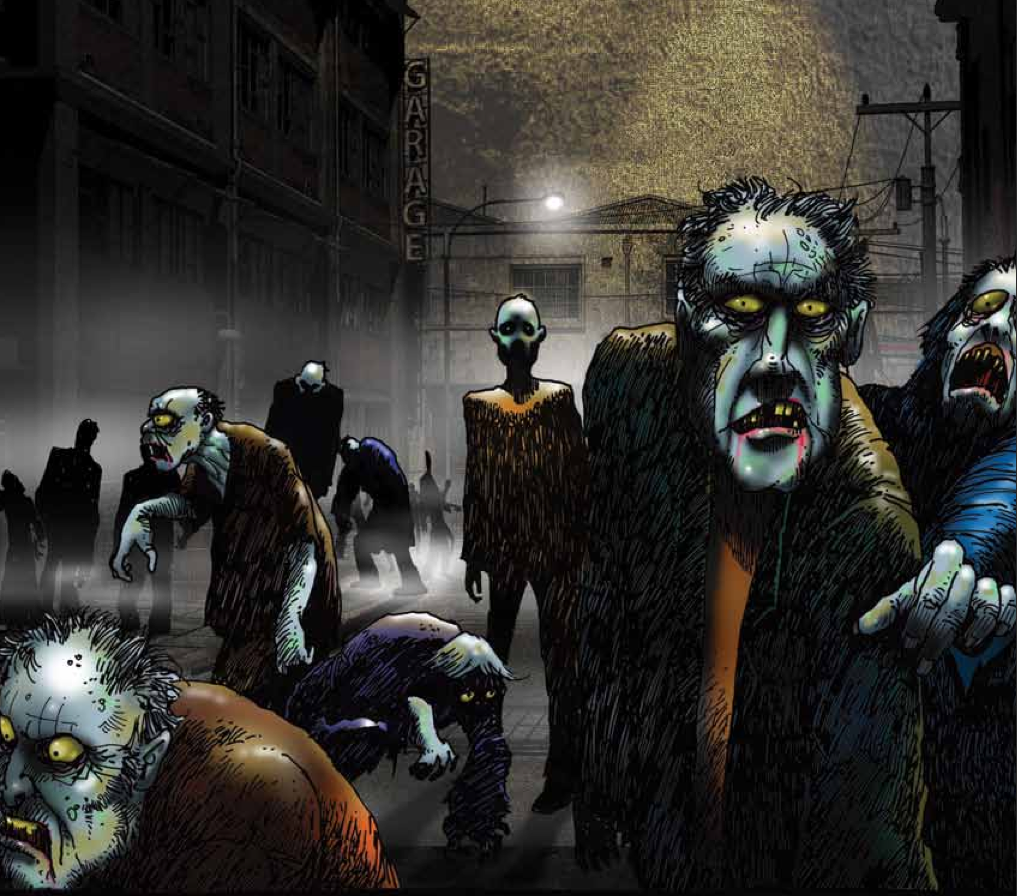 Zombie Alarm , the contagion is growing alarmingly in Italy. In Rome, the phenomenon was limited only in some neighborhoods in the area north of the capital. Some communities zombies were known for some time but were confined between the Via della Camilluccia, the Via Cassia, and some common

Already in 2011 the Centers for Disease Control and Prevention in the United States (CDC) issued a statement: that a zombie apocalypse is coming, and it’s best to be prepared.

“The rise of zombies in pop culture Has Given credence to the idea That zombie apocalypse could happen. In longer available in scenery zombies would take over Entire countries, roaming city streets eating anything living that got in Their way. The proliferation of this idea Has led many people to wonder “How do I prepare for a zombie apocalypse?”

“The rise of zombies in pop culture has given credence to the idea that a zombie apocalypse could happen. In such a scenario zombies could control entire countries, scratching on city streets and eat anything that has life or who is in their way. The proliferation of this idea has led many people to ask: “How do we prepare for a zombie apocalypse?”

Khan recommends the use of standard procedures in the event of a disaster, how to hold bleach and water on hand, planning a meeting place with family. (Source: http://www.theatlantic.com/politics/archive/2011/05/why-did-the-cdc-develop-a-plan-for-a-zombie-apocalypse/239246/)

The question is:  why the CDC says this?

The warning should have been a zombie idea of ​​Dave Daigle, who is head of communications for the Department of preparation of the CDC, which has $ 1.4 billion in the 2014 financial statements and is responsible for dealing with public health issues as a result of major disasters, such as hurricanes and earthquakes. More recently, the unit of CDC disaster has become useful with the cholera epidemic that struck Haiti and with radiation recorded in Fukushima and the nuclear meltdown in Japan. 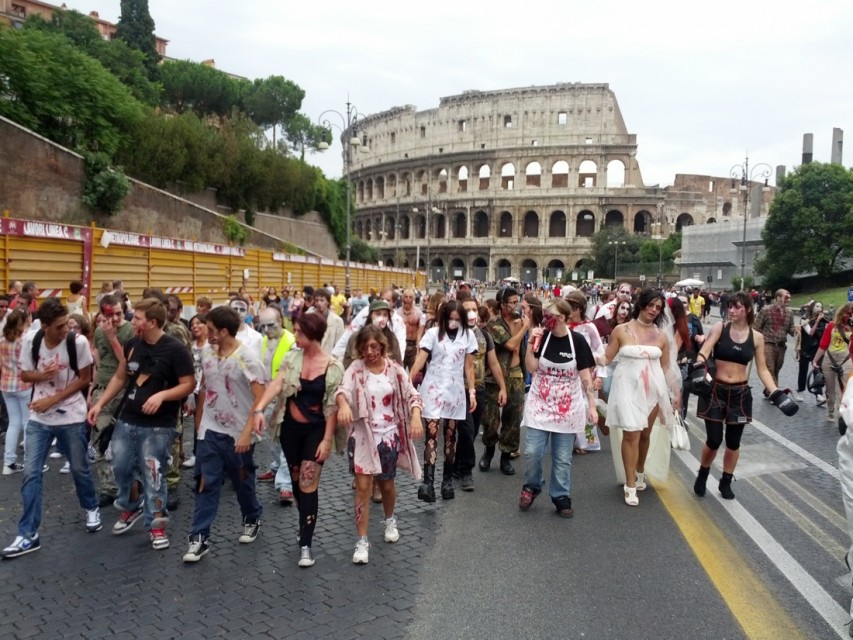 But back to us, the Italian question with particular attention to what is happening in Rome.

It seems that the undead can not be defeated. The zombies are raised and always proliferate and above seem to be a major source of mass extinction of intelligent behavior. In this scenario we all understood how the so-called “smart” you are able to adapt very well to this reality, think rationally and be killed. Only the strong survive, and above all never trust those who reason. Who has a conscience and moral structure authentic is considered weak and therefore must obey, or will end up eaten alive.

The traditional media do not help to contain the phenomenon, seem to feed the infection so that even Arnold Schwarzenegger has lent itself to being the star of a new zombie movie (Maggie: directed by Henry Hobson and will premiere at the Tribeca Film Festival 2015 – trailer: http://youtu.be/EWU0D9K1g5E),

but also enough to mention the 2013 film World War Z, which grossed half a billion dollars, of which soon will come out the sequel to World War Z II (http://www.empireonline.com/news/story.asp?NID=43203).

The logic of zombification zombie brings human beings who survive have to live in an inevitable selfishness, which makes individuals to make the pack and at the same time to be unreliable and dangerous, are in fact ready to attack each other when placed in front of any difficulty. Some have argued that it is a natural phenomenon, that of social Darwinism applied to a society that destroys itself quickly.

We see this clearly when we drive a car in Rome, especially in the more affluent neighborhoods and isolated from the “squares” or historical districts of the city. Humans are almost all citizens seeking to respond to the circumstances of an environment that is not made for life. Surely wealth makes convenience, but the psyche not coached contracts and the reasoning becomes the only door to the real, that reality manipulated the majority refuses to address.

So it seems that the affected individual from zombification is often full of narcissism and the only things that confront are the status symbol, the appearance and they do not ever express opinions.

The label and the etiquette, the “bon ton”, are that ‘set of behavioral norms that identifies the good education and that is expressed in a code that sets out the expectations of social behavior, which is the conventional rule. In a scenario where the zombie infection has managed to widen wildfire seems that the rule has become conventional apathy and individualism. It seems that the logic of the zombies manage to restrict our ability to think about alternatives in the face of any problem. “It seems that people prefer to imagine the zombie apocalypse” rather than their future, said Douglas Rushkoff on Yahoo Finanza News.

So it seems that even in Rome, and in Italy, this zombie contagion is making people less inclined to participate in civic engagement or projects that improve our communities in the medium and long term.

The population is getting used without noticing. It seems that the contagion of logic zombie is making its way even in the most popular neighborhoods, and no longer limited to so-called “Areas Parioline” of Rome. In fact, now also in the periphery logic zombies took root, is breaking up the intelligence and the popular tradition, strong of an increasingly more people are watching more TV series and movie starring zombies, increasingly fueled by structures that organize evenings zombies and themed events. By now even the public institutions, social and political appropriated logic zombies so that, for example, the CDC published in the network already in 2011 a control test to align the phenomenon to the techniques of preventing disease.

Some in the network, such as Brian Merchant, in an interesting article published on Vice.com (http://motherboard.vice.com/it/read/perche-dobbiamo-temere-l-apocalisse-zombie) relates us to the fact that the foundations of logic zombies are compatible with most auteri conservative principles such as self-sufficiency, individualism and isolationism., Merchant reveals that a Wharton professor, Philip Tetlock, found that the Conservatives “have a lower tolerance to compromise; see the world in terms of ‘us’ against ‘them’; prefer to use force to gain an advantage; are ‘more inclined to rely on simple rules of evaluation (good vs. bad) to interpret policy issues’, are “motivated to punish those who violate social norms (eg, those who deviate from traditional norms of sexuality or responsible behavior) and discourage profiteers. ”

This discovery is shocking given that if we reason about us, away from the zombies, we realize now that this is the description of the moral structure of those who survive successfully in a society fully inhabited by zombies.

But at this point it is important to remember that if you are reading this we are not yet become zombies and then strive to think about the fact that the media often choose to put the emphasis on fear, on the riots and looting after that there ‘was a disaster natural, but that the reality is quite different. Normally there are always individuals who act as scavengers, but in a world not zombified humans are prone to ally in times of disaster, human nature, when not infected, is to help those in need to find food, shelter and resources.

Always quote the article by Brian Mechant that analyzes a book written by Rebecca Solnit in 2009, A Paradise Built in Hell, which examines how communities tend actually to respond to disasters in real life and works to correct the myth:

“The basic idea is that people overwhelmed by fear and dall’egoistico desire to survive to the point that their judgment, their social ties, even their humanity are overwhelmed, and this can happen almost instantly when things go wrong -the old concept of back to nature brute, though for fear and not for evil inherent, “he writes. “It is assumed that we are all antisocial bombs about to explode … Hollywood feeds extensively these beliefs. Sociologists, however, do not. ”

But Italy is beautiful and Rome is wonderful without zombies and thank goodness there seem to be some signs that the logic zombies can evolve and maybe then you’re looking for a cure, which tries to stop this slow transition to zombies. This brings optimism and hope of civilized society. But the risk remains very high and we do not hide the concern that the logic zombies become the common logic and therefore be able to maintain its dominant status and that philosophy that rewards the “flat encephalogram” can stay in time with the result of lowering the threshold of attention of all of us and then finally able to stifle our ability to face reality, to reason and thus to “imagine the future.”

For more details you can download here the Document of the CDC: Preparedness 101 ZOMBIE PANDEMIC:http://www.cdc.gov/phpr/documents/11_225700_A_Zombie_Final.pdf

One comment to “Zombie, the infection is growing even in Rome”