While strolling on the natural pathways in the largest park in Rome, you?ll certainly agree with a passer-by?s sentence written on his t-shirt: ?work less.? It seems good advice to show off while riding your bicycle with children, like that happy father in his slender free time!

You can enjoy your spare time in different ways at Villa Ada Park, since renting bicycles, canoes, or ponies are just some of the activities to welcome you. You?ll be spoiled by the choices indeed: does your weight worry you? And you long to slim down? The Town Council has set up a series of free gym lessons surrounding the pool every Sunday. 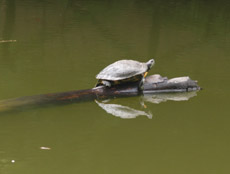 Should you, on the contrary, be a lazy person, you can peacefully read your newspaper while your dog is busy running after some friends. Never canoed in your life? It?s time to learn, then, enrolling in a canoe course on the pool! Unless you are allergic to pollen, it?s really pleasant in the spring to walk around the park, discovering some almost secluded spots.

Villa Ada Park is 450 acres wide, definitely not a little green garden, that also includes ?Monte Antenne,? a 67 meter high hill, which is an ancient archaeological site. Unfortunately, the hill was almost destroyed in 1870 when a fort was built there to defend the new capital.
The ancient Antenne (which in Latin means ?before the river?) was a small town overlooking the Tiber. It was in a strategic position, but doomed to yield to the great power of Rome. To reach Monte Antenne now, go through the many gates on via Salaria, and turn left at the military barracks on via Ponte Salario. T 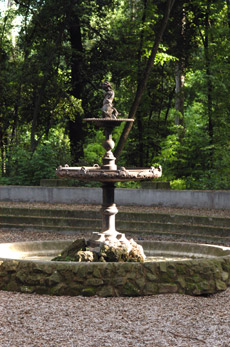 hen the road goes up hill, until it ends. Park your car, and go the rest of the way on foot. Forte Antenne still stands on top of the hill, almost completely covered by rich vegetation. Peeping through its old main door, a long silent passage appears in the dark, offering a mysterious atmosphere to the environment. Up the hill, a wonderful forest of pine trees thrives.
But we need more sunlight now. Let?s go down the hill, to the pool. Here, the air is fresh and the water reflects the bright sky above. On summer nights, interesting concerts are arranged not far from the pond. The name of the cultural initiative is Villa Ada incontra il Mondo, that is ?Villa Ada meets the world,? and ethnic music governs these concerts with African, Mediterranean, Southern Italian, and Indian sounds. A weekly card can be purchased, and it?s really worth it!
Far from lacking artistic value (like the most famous Villa Borghese or Villa Pamphili), the park is mostly interesting for its natural heritage. There are a lot of rare trees that have been planted here, such as the palmet, a species of sequoia imported from Tibet long ago, and some peculiar pink mimosas. The woody part of the Villa is crowded with squirrels.

Should you be curious to know the origin of the woman?s name given to the park, it is due to the Count Tellfner who, in 1878, owned the whole area and dedicated it to his wife Ada. A few years later the royal Savoy family regained possession of the park, which became their private residence. But the name remained the same. At present, Villa Ada is part public (controlled by the Council of Rome) and part private, but the Town Council has made a formal claim to take ownership of the whole area. What used to be the royal villa is now the seat of the Egyptian Embassy. 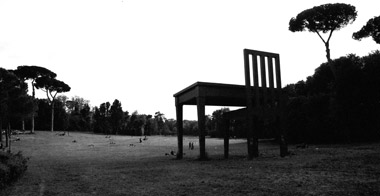 When exiting along via Ponte Salario, and walking down the hill, a beautiful Roman mosque appears. 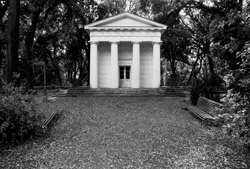 Just take a look at it, it?s quite a spectacular sight, plunged in the greenery and overlooking the Tiber valley. You?ll probably feel tired at the end of such a natural tour, but hold out! Coming back through one of via Salaria?s gates, you won?t believe your eyes! Standing in the grass, a gigantic table and chair will amaze you. It’s an iron work of art placed in the middle of a beautiful valley inviting you to put off going back to work for just a little longer and relax in such a lovely spot.