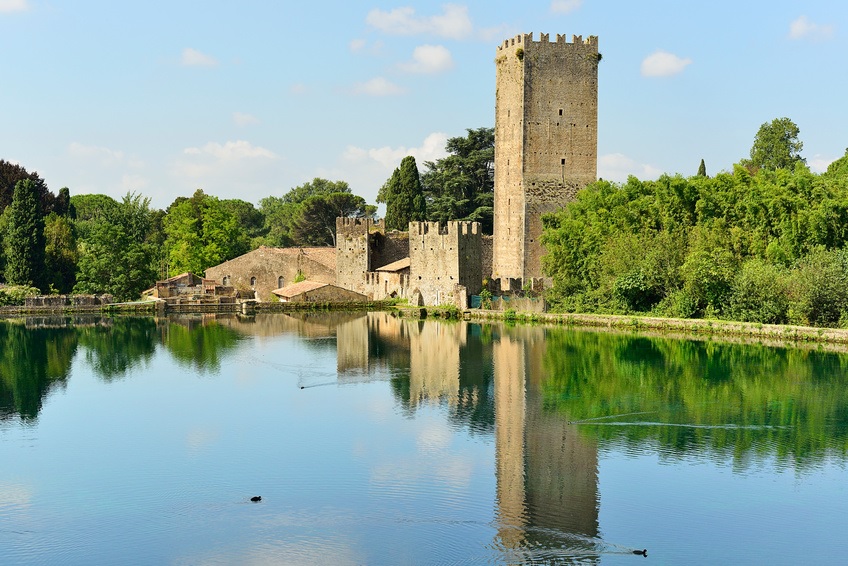 Nearby south of Rome, between the sea and the coastal range of mountains we find a mixed and varied territory where, natural pearls as the Circeo National Park, there are also delightful medieval villages like Ninfa, Sermoneta and Norma.

Land of sea and mountains, the province of Latina stretches along a mixed and varied territory, where a small natural pearls as the Circeo National Park, there are also delightful medieval villages, such as Ninfa, Sermoneta and Norma.
This beautiful country is located after the town of Latina (50 km from Rome) is called “Agro Pontino”, namely the large flat area, once covered by marshes, brought to life in the years of Fascism and currently home to intensive cultivation of fruits and vegetables.
A land, therefore, that a coastline renowned and very impressive, manages to combine a hinterland just as interesting. The ideal destination for a day trip or a weekend getaway where you can enjoy nature, history, and, finally, a very varied gastronomy. 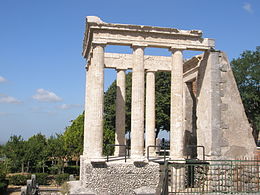 The journey to the province of Latina begins from the villages located in the heart of Lepinis , namely the small town of Cori .Cori was well developed in the age of the expansion of Rome (7th-6th century BC). It became a Roman possession after the Social War (90-88 BC), maintaining some administrative and political autonomy.
In the Middle Ages Cori, which suffered a steep decadence in the early centuries of that age, was often allied with its neighbour Velletri. It is part of the province of Latina since 1934; Here you can admire some Roman monuments , including the Temple of Hercules, dating from the first century BC and monumental symbol of the city. Of the same period is the Temple of Castor and Pollux , of which , however, remain only two columns resting on a modern building. Always from the Roman period are in the lower part of the country , the Well Doric and the Chain Bridge.
The hills around Cori is permitted to produce both red and white Italian DOC wine, with the region producing more white wines. Grapes are limited to a harvest yield of 16 tonnes/ha with finished white wines needing a minimum alcohol level of 11% and finished reds needing 11.5%.

At about ten kilometers from Cori is reached , however, Roccamassima , the highest town in the Province. The town is characterized by narrow streets and steep and leaning buildings , almost forming a wall of defense around the former palace of the Prince. The old Rocca Massima (traslated: Maximum Rock) might be identified with the ancient Carventum, a city of Latium vetus at the time of the Latin League, in the war against Rome.
Going down to Latina, you will come across Ninfa , an ancient medieval village abandoned in the late fourteenth and eighteenth century , best known for its beautiful garden. This natural monument, considered a true paradise on earth is one of the most romantic gardens in the world, deserves a thorough visit. 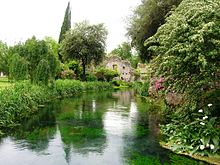 The Garden of Ninfa is a landscape garden in the territory of Cisterna di Latina. The park has an area of 105 hectares (260 acres), and is an Italian natural monument.The landscape garden within the park comprises 8 hectares (20 acres) and contains medieval ruins, several oaks, cypresses and poplars, grassy meadows, a wide range of exotic plants from various parts of the world, numerous watercourses and a large variety of rambling roses growing over the stone walls of the ruins. The site is run by the Italian foundation Fondazione Roffredo Caetani. It is open to the public at set times from April to November.

The garden includes the ruins of the ancient settlement of Ninfa, whose name seems to derive from a classical era nymphaeum, a temple dedicated to nymphs, located on an island in the small lake; nymphs were believed to dwell in mountains and groves, by springs and rivers, and also in trees and in valleys and cool grottoes. According to Charles Quest-Ritson’s book Ninfa: The Most Romantic Garden in the World, the Gardens of Ninfa’s first documented evidence is from Pliny the Younger, who described a temple on the premises dedicated to water nymphs. 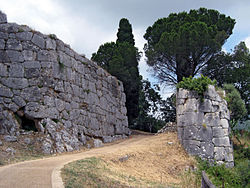 Starting from Ninfa you climb a few kilometers and you will reach Norma, situated on the edge of a rocky outcrop. Even here, in addition to the typical structure of the medieval village, you should pay a visit to the Archaeological Museum and Civic virtual of ancient Norba. The greediest, however, will make a stop at the Chocolate Museum (www.museodelcioccolato.com). Norba is an ancient town of Latium (Adjectum). It is situated 1 mile northwest of the modern town of Norma, some 1575 ft. above sea-level, on the west edge of the Volscian Mountains or Monti Lepini. The town is perched above a precipitous cliff with a splendid view over the Pomptine Marshes below. 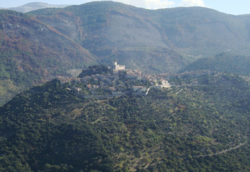 In the plains, on the other hand, on the side of the mountain facing Nymph, lies the cave church of San Michele Arcangelo, a rock cave converted into a church in 1183. Finally, do not miss it Sermoneta, one of the best conservari medieval towns in Lazio. It is a walled hill town, with a 13th-century Romanesque cathedral called Cathedral of S. Maria Assunta and a massive castle, built by the Caetani family. The Cistercian Valvisciolo Abbey is located nearby. In the 13th-16th centuries, it was home to a flourishing Jewish community.Here, in addition you can also admire the Loggia dei Mercanti, some tower-houses, the Cathedral, ending with a stop at the panoramic Belvedere.

Another small town to visit is Sezze, this area has been famous for its fine climate since Roman times: warm and dry in summer, cool in winter.

Sezze is about 65 km south of Rome and 10 km from the coast. The historical center of Sezze is located on a high hill commanding the Pontine plain. Here you can admire a splendid panorama from which you can enjoy views of the Pontine plain together with the Monte Circeo, Terracina and the Pontine islands. According to a legend, the city was founded by the mythical hero Hercules after his victory over the Lestrigones, a population of giant cannibals living in southern Lazio. The town coat of arms features the white Nemean lion which Hercules slew in the first labor. Sezze is also famous for its food especially for artichokes which is given every year the famous “Festival of Artichokes Sezze” which is normally held in the month of April.

The cuisine is the expression of a heterogeneous territory, where the seafood alternating characteristic flavors of the hinterland, the typical products of the province of Latina, ranging from red mullet, cod, sea bass and sole, pine nuts and honey eucalyptus. Not only that but the Agro Pontino is also well known for the production of PGI Kiwi, typical fruits of the fall season. It then goes on to broccoli and artichokes, typical of the area of Sezze, ham of Bassiano, as well as extra virgin olive oil, a deputy to the plain of Cori, which are, in addition, some white wines Doc prevail instead of the red in the Aprilia and the Circeo. 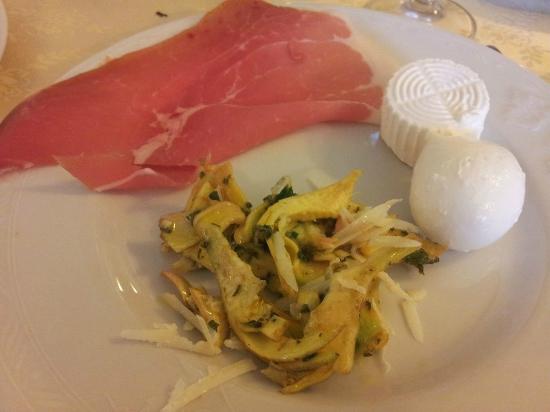