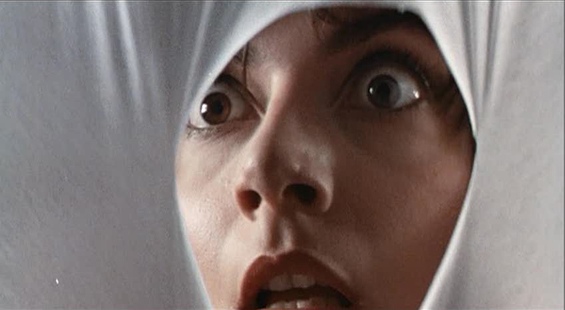 The world owes a great debt to Italy for its art.  In grade school I remember paying tribute to the great Renaissance masters: Raphael for his full figured Madonnas, Michelangelo for his muscular women and beautiful men, and Leonardo who redrew the human figure.  There are the operas of Verdi, Puccini, and Rossini, the writings of Pasolini, the films of Fellini and Visconti.  The list goes on and on (as do the last names that end with the letter “I”).  Who can deny that we aren’t better people because of the Italians’

Upon moving to Italy, I was urged to divulge in some of Rome’s artistic triumphs – so I headed to my neighborhood video store.  It didn’t take long before I came home with a film by Dario Argento.

“Why this'” a friend said.  “Go to Villa Borghese; see the Bernini sculptures, the Caravaggio paintings.  Why this'”

I had come home with Argento’s 1977 film, Suspira.  Growing up I had studied the Italian painters, among others by day, watching grainy slides in a dark room, guessing who painted what and when and always getting it wrong.  But by night I treated myself to the horrors of American slasher films: Friday the 13th, Halloween, A Nightmare on Elm Street, etc.  This time around however, watching Suspira I couldn’t be just scared, I had to be aesthetically scared.  That is to say the murders are visually compelling and beautiful to watch.  So perhaps Argento does have something in common with the Italian masters after all.

Dario Argento was born in Rome in 1940.  He is the son of Italian film producer Salvatore Argento, so it was not coincidence that Argento took a strong interest in film making.  He began work as a film critic, but soon became director Mario Bava’s assistant.  Bava helped refine Argento’s cinematic interests in horror, and in 1970 Dario Argento made his directorial debut with L’uccello dalle piume di cristallo (The Bird with the Crystal Plumage).

Argento’s films are not just fun and blood, however. What separates his movies from the simplicity of other horror and/or slasher films is how he incorporates mystery into his plots, an idea taken from the genre of Italian giallo, or mystery novels, that alludes to their yellow covers.  Clues are given from the beginning of a film as to whom the killer is and though the clues don’t always make sense, except to the one solving the murders, they create an amusing trail for the audience to follow.  In L’uccello dalle piume di cristallo, the scene containing the murder is repeatedly shown to us from different angles until the murderer becomes miraculously obvious.

Some of his later films use supernatural motifs that are difficult to believe, like in Phenomena, where a girl is capable of talking and giving instructions to bugs to help battle the person murdering her schoolmates.  Or in La sindrome di Stendhal (The Stendhal Syndrome), starring Dario’s daughter Asia, who has a strange hallucinatory reaction when viewing artwork that leads to the discovery of a killer.  But where else can we see the beautiful Asia Argento kissing a fish with well-endowed lips’  One thing is for certain though, Dario Argento uses stereotypical archetypes to portray good and evil: The bad guy is always in black and the hero always overcomes personal and social setbacks to become triumphant in the end.

The protagonist, in most of Argento’s films, is immersed in a world of art.  In L’uccello dalle pilume di cristallo and Tenebrae, a novelist becomes a witness to a horrible murder which he must solve.  In Profondo  rosso, a music composer reads a book on the occult which relates to the bloody murder of his neighbor, and Suspira is about a young female dancer who goes off to dancing school and becomes witness to her classmates’ mutilations; the opening scene in this film is quite chilling.  Most of Argento’s movies contain tension building soundtracks.  A few to note are Profondo Rosso, Suspira, and Tenebrae which feature wonderful rock-driven scores by The Goblins that further bridge the gap between horror and art.  His newest film, Il cartaio, also features music from ex-Goblins member Claudio Simonetti.

One defect in all of Argento’s films however, is the terrible over-dubbing.  Watching the lips of the actors, one gets the impression they are all from different countries and speaking in their own languages, which will later to be replaced with Italian dialogue in a sound studio.  Even the Italian actors dub over their lines with catastrophic results; all the dialogue is laughably flat and uninspired.

Imagine you are attending a class on horror films and it is time to take the final exam.  You sit down at your desk and the lights dim.  On the giant screen television in front of the room different clips from movies are shown featuring a murder, and you must guess the film and its director.  I can say without a doubt that any film clip from Dario Argento would be as easily recognizable as a sculpture by Michelangelo.