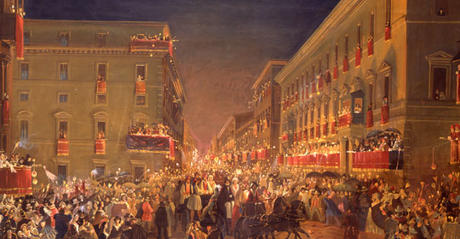 October 4: Celebration of St Francis
St Francis, patron of Rome and the Republic, is celebrated with vigour throughout the city every year on his feast day. The most important celebration occurs in the Santa Maria dell’ Aracoeli church.
The Santa Maria dell’ Aracoeli church is situated next to the Campidoglio, Michelangelo’s beautiful square in the centre of Rome. The site of the church is where the virgin sybil supposedly predicted the coming of Jesus to Emperor Augustus. Just take Metro Line B from Castro Pretorio for 3 stops and get off at “Colosseo” station. From there, it’s 200 metres on foot.

November 1: All Saints Day
Public holiday. Many churches not usually open may be open for visiting this day.

December 8: Immaculate Conception
Public and religious holiday. The pope or his envoy places flowers at the column of the Virgin in Piazza di Spagna.

December 31: New Year’s Eve, Vespers and “Te Deum”
Masses are celebrated in churches throughout the city. Traditionally, broken crockery is tossed from balconies, and a great all-night party reverberates in the Piazza del Popolo.

January 6: Epiphany
Public and religious holiday, called Befana in Italian. An ordination of new bishops takes place in St. Peter’s Basilica.
According to legend, the Three Wise Men on their journey to visit the newborn Jesus, stopped to ask an old woman (La Befana) for food and shelter. She refused and they continued on their way. A few hours later, the old woman glimpsed to the night sky, saw the North Star, and had a change of heart, but the Magi were long gone. She collected toys from around the house that belonged to her deceased child and went to find the Infant Jesus. She never did find Him and continues roaming the world, every year, leaving presents for children in search of the Christ Child.

March 1: Ash Wednesday
Basilica of St. Sabina, Mass, Blessing and Imposition of the Ashes by the Pope.

Easter
April 9: Palm Sunday
Palm Sunday and the Passion of the Lord celebrated in St. Peter’s Square with the blessing of the palms and mass.
April 13: Holy Thursday
Chrismal Mass at the Vatican Basilica in the morning and Mass of the Lord’s Supper in the afternoon.
April 14: Good Friday
The Pope traditionally leads a procession, the Via Crucis, from the Colosseum and up the Monte Palatino, reenacting the 14 Stations of the Cross, from Jesus’ death sentence to the placement of his body in the tomb.
April 15: Holy Saturday
Easter Vigil Celebration and Holy Mass
April 16: Easter Sunday
Urbi et Orbi message and blessing. An outdoor mass takes place Easter morning in St. Peter’s Square. At noon, the pope blesses the crowds assembled in St. Peter’s Square.
April 17: Easter Monday

July 16 – 23: Festa de’Noantri
Every year, on the Saturday following the Festa del Carmelo, a statue of the Vergine del Carmine is taken out from its resting place in the church of Sant’Agata in Rome, paraded through the streets of the Trastevere quarter and taken to San Crisogno, where it remains on display for eight days.

August 5: The Miracle of the Madonna of the Snow Every year a curious legend which narrates the story of the founding of the Santa Maria Maggiore church is dramatised in a solemn mass, where flower petals are scattered on the altar.

August 15: Feast of the Assumption “Ferragosto”

i3factory.com
One comment to “Religious Events in Rome and Religious Holidays in Rome Calendar”