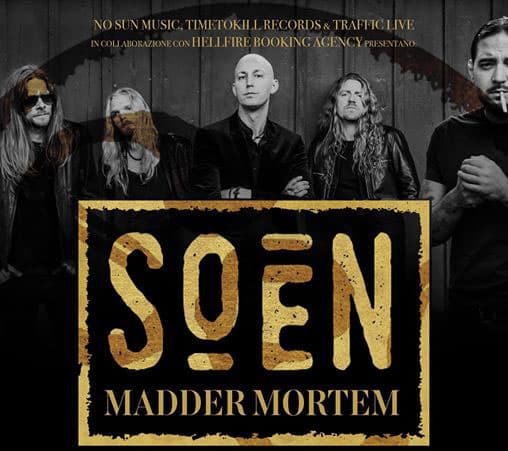 Joel Ekelöf says to Radio Rock: “The Roman audience is our favorite”

Thursday, October 12, 2017 in Rome at Largo, Via Biordo Michelotti, was held the expected concert of the Soen.

Soen returns to Italy, one of the revelations of the new experimental and progressive metal panorama. Defined as superband is composed of former members of Opeth and Willowtree, considered among the most beloved in Italy in the gown of experimental metal sonorities.

The enthusiasts know well about their three works in the studio “Cognitive”, “Tellurian” and “Lykaia” that consider them as small pearls.
A live impact, atmospheric, taken entirely for the upcoming live DVD of the band, the progressive metal supergroup wanted to immortalize alchemy with the fans of the Capital by turning a live dvd.

Madder Mortem, also known as the Mistery Tribe, a Norwegian band with a very distinctive sonority between the progressive metal in all its most varied forms and the gothic / doom atmospheres of most Scandinavian artists .

The superband progressive metal Soen features an artistic cartoon and a visceral bond with the city of Rome.
At the same place, the Soen still feel enthusiastic about the heat they received in their previous Roman date of 2014 and no coincidence, they recorded the sold out.
Joel Ekelöf, in an interview with Radio Rock a few hours before the concert, said: “The Roman public is our favorite. We want to show the whole world its warmth. “